Zooplankton (/ˈzoʊ.əˌplæŋktən, ˈzuː(ə)-, ˈzoʊoʊ-/,[1] /ˌzoʊ.əˈplæŋktən, -tɒn/)[2] are heterotrophic (sometimes detritivorous) plankton (cf. phytoplankton). Plankton are organisms drifting in oceans, seas, and bodies of fresh water. The word zooplankton is derived from the Greek zoon (ζῴον), meaning "animal", and planktos (πλαγκτός), meaning "wanderer" or "drifter".[3] Individual zooplankton are usually microscopic, but some (such as jellyfish) are larger and visible to the naked eye.

Zooplankton are the animal component of the planktonic community ("zoo" comes from the Greek for animal). They are heterotrophic (other-feeding), meaning they cannot produce their own food and must consume instead other plants or animals as food. In particular, this means they eat phytoplankton.

Zooplankton are generally larger than phytoplankton, mostly still microscopic but some can be seen with the naked eye. Many protozoans (single-celled protists that prey on other microscopic life) are zooplankton, including zooflagellates, foraminiferans, radiolarians, some dinoflagellates and marine microanimals. Macroscopic zooplankton include pelagic cnidarians, ctenophores, molluscs, arthropods and tunicates, as well as planktonic arrow worms and bristle worms.

Zooplankton is a categorization spanning a range of organism sizes including small protozoans and large metazoans. It includes holoplanktonic organisms whose complete life cycle lies within the plankton, as well as meroplanktonic organisms that spend part of their lives in the plankton before graduating to either the nekton or a sessile, benthic existence. Although zooplankton are primarily transported by ambient water currents, many have locomotion, used to avoid predators (as in diel vertical migration) or to increase prey encounter rate.

Ecologically important protozoan zooplankton groups include the foraminiferans, radiolarians and dinoflagellates (the last of these are often mixotrophic). Important metazoan zooplankton include cnidarians such as jellyfish and the Portuguese Man o' War; crustaceans such as copepods, ostracods, isopods, amphipods, mysids and krill; chaetognaths (arrow worms); molluscs such as pteropods; and chordates such as salps and juvenile fish. This wide phylogenetic range includes a similarly wide range in feeding behavior: filter feeding, predation and symbiosis with autotrophic phytoplankton as seen in corals. Zooplankton feed on bacterioplankton, phytoplankton, other zooplankton (sometimes cannibalistically), detritus (or marine snow) and even nektonic organisms. As a result, zooplankton are primarily found in surface waters where food resources (phytoplankton or other zooplankton) are abundant.

Just as any species can be limited within a geographical region, so are zooplankton. However, species of zooplankton are not dispersed uniformly or randomly within a region of the ocean. As with phytoplankton, ‘patches’ of zooplankton species exist throughout the ocean. Though few physical barriers exist above the mesopelagic, specific species of zooplankton are strictly restricted by salinity and temperature gradients; while other species can withstand wide temperature and salinity gradients.[5] Zooplankton patchiness can also be influenced by biological factors, as well as other physical factors. Biological factors include breeding, predation, concentration of phytoplankton, and vertical migration.[5] The physical factor that influences zooplankton distribution the most is mixing of the water column (upwelling and downwelling along the coast and in the open ocean) that affects nutrient availability and, in turn, phytoplankton production.[5]

Through their consumption and processing of phytoplankton and other food sources, zooplankton play a role in aquatic food webs, as a resource for consumers on higher trophic levels (including fish), and as a conduit for packaging the organic material in the biological pump. Since they are typically small, zooplankton can respond rapidly to increases in phytoplankton abundance,[clarification needed] for instance, during the spring bloom. Zooplankton are also a key link in the biomagnification of pollutants such as mercury.[6]

Zooplankton can also act as a disease reservoir. Crustacean zooplankton have been found to house the bacterium Vibrio cholerae, which causes cholera, by allowing the cholera vibrios to attach to their chitinous exoskeletons. This symbiotic relationship enhances the bacterium's ability to survive in an aquatic environment, as the exoskeleton provides the bacterium with carbon and nitrogen.[7]

Protozoans are protists that feed on organic matter such as other microorganisms or organic tissues and debris.[8][9] Historically, the protozoa were regarded as "one-celled animals", because they often possess animal-like behaviours, such as motility and predation, and lack a cell wall, as found in plants and many algae.[10][11] Although the traditional practice of grouping protozoa with animals is no longer considered valid, the term continues to be used in a loose way to identify single-celled organisms that can move independently and feed by heterotrophy.

Marine protozoans include zooflagellates, foraminiferans, radiolarians and some dinoflagellates. 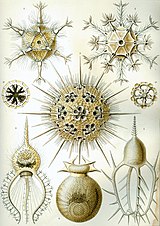 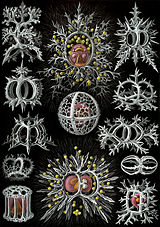 Radiolarians are unicellular predatory protists encased in elaborate globular shells usually made of silica and pierced with holes. Their name comes from the Latin for "radius". They catch prey by extending parts of their body through the holes. As with the silica frustules of diatoms, radiolarian shells can sink to the ocean floor when radiolarians die and become preserved as part of the ocean sediment. These remains, as microfossils, provide valuable information about past oceanic conditions.[12]

Like radiolarians, foraminiferans (forams for short) are single-celled predatory protists, also protected with shells that have holes in them. Their name comes from the Latin for "hole bearers". Their shells, often called tests, are chambered (forams add more chambers as they grow). The shells are usually made of calcite, but are sometimes made of agglutinated sediment particles or chiton, and (rarely) of silica. Most forams are benthic, but about 40 species are planktic.[13] They are widely researched with well established fossil records which allow scientists to infer a lot about past environments and climates.[12]

...can have more than one nucleus

Dinoflagellates are part of the algae group, and form a phylum of unicellular flagellates with about 2,000 marine species.[15] The name comes from the Greek "dinos" meaning whirling and the Latin "flagellum" meaning a whip or lash. This refers to the two whip-like attachments (flagella) used for forward movement. Most dinoflagellates are protected with red-brown, cellulose armour. Like other phytoplankton, dinoflagellates are r-strategists which under right conditions can bloom and create red tides. Excavates may be the most basal flagellate lineage.[16]

Unarmoured
Traditionally dinoflagellates have been presented as armoured or unarmoured

A mixotroph is an organism that can use a mix of different sources of energy and carbon, instead of having a single trophic mode on the continuum from complete autotrophy at one end to heterotrophy at the other. It is estimated that mixotrophs comprise more than half of all microscopic plankton.[22] There are two types of eukaryotic mixotrophs: those with their own chloroplasts, and those with endosymbionts—and others that acquire them through kleptoplasty or by enslaving the entire phototrophic cell.[23]

The distinction between plants and animals often breaks down in very small organisms. Possible combinations are photo- and chemotrophy, litho- and organotrophy, auto- and heterotrophy or other combinations of these. Mixotrophs can be either eukaryotic or prokaryotic.[24] They can take advantage of different environmental conditions.[25]

Phaeocystis species are endosymbionts to acantharian radiolarians.[29][30] Phaeocystis is an important algal genus found as part of the marine phytoplankton around the world. It has a polymorphic life cycle, ranging from free-living cells to large colonies.[31] It has the ability to form floating colonies, where hundreds of cells are embedded in a gel matrix, which can increase massively in size during blooms.[32] As a result, Phaeocystis is an important contributor to the marine carbon[33] and sulfur cycles.[34] 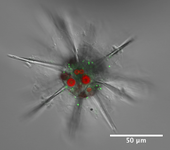 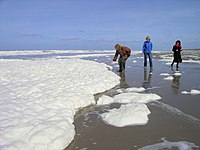 White Phaeocystis algal foam washing up on a beach

A number of forams are mixotrophic. These have unicellular algae as endosymbionts, from diverse lineages such as the green algae, red algae, golden algae, diatoms, and dinoflagellates.[13] Mixotrophic foraminifers are particularly common in nutrient-poor oceanic waters.[35] Some forams are kleptoplastic, retaining chloroplasts from ingested algae to conduct photosynthesis.[36]

By trophic orientation dinoflagellates are all over the place. Some dinoflagellates are known to be photosynthetic, but a large fraction of these are in fact mixotrophic, combining photosynthesis with ingestion of prey (phagotrophy).[37] Some species are endosymbionts of marine animals and other protists, and play an important part in the biology of coral reefs. Others predate other protozoa, and a few forms are parasitic. Many dinoflagellates are mixotrophic and could also be classified as phytoplankton. The toxic dinoflagellate Dinophysis acuta acquire chloroplasts from its prey. "It cannot catch the cryptophytes by itself, and instead relies on ingesting ciliates such as the red Myrionecta rubra, which sequester their chloroplasts from a specific cryptophyte clade (Geminigera/Plagioselmis/Teleaulax)".[27]

Gelatinous zooplankton include ctenophores, medusae, salps, and Chaetognatha in coastal waters. Jellyfish are slow swimmers, and most species form part of the plankton. Traditionally jellyfish have been viewed as trophic dead ends, minor players in the marine food web, gelatinous organisms with a body plan largely based on water that offers little nutritional value or interest for other organisms apart from a few specialised predators such as the ocean sunfish and the leatherback sea turtle.[38][39] That view has recently been challenged. Jellyfish, and more gelatinous zooplankton in general, which include salps and ctenophores, are very diverse, fragile with no hard parts, difficult to see and monitor, subject to rapid population swings and often live inconveniently far from shore or deep in the ocean. It is difficult for scientists to detect and analyse jellyfish in the guts of predators, since they turn to mush when eaten and are rapidly digested.[38] But jellyfish bloom in vast numbers, and it has been shown they form major components in the diets of tuna, spearfish and swordfish as well as various birds and invertebrates such as octopus, sea cucumbers, crabs and amphipods.[40][39] "Despite their low energy density, the contribution of jellyfish to the energy budgets of predators may be much greater than assumed because of rapid digestion, low capture costs, availability, and selective feeding on the more energy-rich components. Feeding on jellyfish may make marine predators susceptible to ingestion of plastics."[39] According to a 2017 study, narcomedusae consume the greatest diversity of mesopelagic prey, followed by physonect siphonophores, ctenophores and cephalopods.[41] The importance of the so called "jelly web" is only beginning to be understood, but it seems medusae, ctenophores and siphonophores can be key predators in deep pelagic food webs with ecological impacts similar to predator fish and squid. Traditionally gelatinous predators were thought ineffectual providers of marine trophic pathways, but they appear to have substantial and integral roles in deep pelagic food webs.[41]

Microzooplankton: major grazers of the plankton...

DOM, POM and the viral shunt 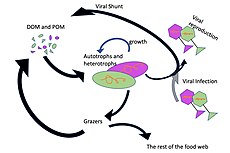