Zonguldak Province (Turkish: Zonguldak ili) is a province along the western Black Sea coast region of Turkey. The province is 3.481 km2 in size and has a population of 619,703. Its adjacent provinces are Düzce to the southwest, Bolu to the south, Karabük to the southeast, and Bartın to the east. The capital is Zonguldak. Its Governor is Erdoğan Bektaş.[3]

Since the discovery of coal in the province, Zonguldak has become a major coal production center.

Zonguldak province is divided into 8 districts (capital district in bold):

The Ereğli Museum, located in the town of Ereğli, is the only museum in the city.

Ereğli was founded during the 6th century B.C. by the Mariandynians, who were the successors of the Phrygians. Ereğli was an important commercial wharf (emperion), which takes its name from the famous mythic hero, Hercules (Heracles). The city preserved its importance during the Roman, Byzantine, Seljuk, and Ottoman Empire periods. Important historical ruins in the region include the Acheron Valley ruins, in which the Cehennem Ağzı caverns are located, along with Hellenic, Roman, Byzantine and Ottoman ruins, Ereğli Castle, Heracles Palace, Çeştepe Lighthouse tower, Byzantine water cisterns, Krispos mausoleum, Byzantine church and Halil Paşa Mansion.

The boroughs of the city are used as daily recreation areas for leisurely hikes by regional residents. Boroughs are artificial lakes intended to provide drinking water or serve other industrial purposes. These boroughs are: Ulutan Dam Lake at the center, Kızılcapınar Dam Lake, and Gülüç Dam Lake in Ereğli, Dereköy Pond at Çatalağzı borough and Çobanoğlu Pond (18 ha.) at Karapınar borough.

The most important waterfalls of the city are: Harmankaya at Center Kokaksu site, Değirmenağzı at Kozlu borough and Güneşli waterfalls at Ereğli, and their environs are also used for trekking. 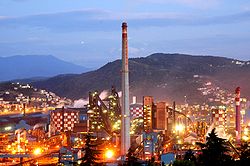 The discovery of coal in the Ereğli (Heraclea) region (known today as the Zonguldak basin) dates back to the reign of Sultan Mahmud II, and its extraction to Sultan Abdülmecid's reign.

The first specimen of Turkish coal was brought from Ereğli to Istanbul in 1822, but nothing was done for exploration and exploitation of this coal. However, in 1829, another specimen of coal was brought to Istanbul by Uzun (Long) Mehmet, a sailor and native of the village of Kestaneci, near Ereğli. This time attention was given to the discovery and the sailor received a reward of a life pension, but before he could benefit from this reward he was murdered.

The first miners requested and delivered from the Austrian Government are the Austrian Croats known to have been employed in the Ereğli Coal Mines. The correspondence between Istanbul and the embassy in Vienna show that coal production in the Ereğli Basin predates the March 1837 request by 18 months and that production started around September 1835.[4]

An investigation of Hazine-i Hassa (Ottoman Imperial Treasury Department) records in the Ottoman archives shows that regular mining activities in the Ereğli Basin started in February 1841. This is confirmed by a newspaper article published in the 14 February 1841 issue of Ceride-i Havadis.

Timeline of the administration of the Ereğli coal mines after 1845

After 1865, one of these "various places" is named as Zone-Goul-Dagh or Zon-Goul-Dak, with mixed Turkish-French pronunciation.

Zone-Goul-Dagh was born as a port town of east Ereğli Coal Mines. Its name was probably given by miners/administrators who speak French. (Société d'Héraclée !?) (Probably, the first name of the town was "Sea Port of Zone-Goul-Dagh"... Because, Goul mountain is about 2-3 kilometers far from sea side...)

Several mining disasters have occurred in the Zonguldak mines: