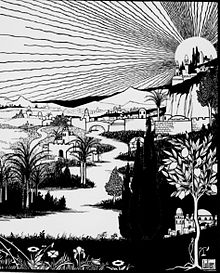 Ephraim Moses Lilien, Stamp for the Jewish National Fund, Vienna, 1901–2. The symbolic design presents a Star of David containing the word Zion in the Hebrew alphabet. 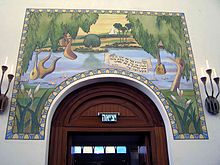 May our eyes behold your return in mercy to Zion. Design by Lilien to the Fifth Zionist Congress, Basel, December 1901.[1]

Zion (Hebrew: צִיּוֹן / 𐤑𐤉𐤅𐤍‎ Ṣîyōn, LXX Σιών, also variously transliterated Sion,[2] Tzion, Tsion, Tsiyyon[3]) is a placename in the Hebrew Bible used as a synonym for Jerusalem[4][5] as well as for the Land of Israel as a whole (see Names of Jerusalem).

The name is found in 2 Samuel (5:7), one of the books of the Hebrew Bible dated to before or close to the mid-6th century BCE. It originally referred to a specific hill in Jerusalem (Mount Zion), located to the south of Mount Moriah (the Temple Mount). According to the narrative of 2 Samuel 5, Mount Zion held the Jebusite fortress of the same name that was conquered by David and was renamed the City of David. That specific hill ("mount") is one of the many squat hills that form Jerusalem, which also includes Mount Moriah (the Temple Mount), the Mount of Olives, etc. Over many centuries, until as recently as the Ottoman era, the city walls of Jerusalem were rebuilt many times in new locations, so that the particular hill known as Mount Zion is no longer inside the city wall, but its location is now just outside the portion of the Old City wall forming the southern boundary of the Jewish Quarter of the current Old City. Most of the original City of David itself is thus also outside the current city wall.

The term Tzion came to designate the area of Davidic Jerusalem where the fortress stood, and was used as well as synecdoche for the entire city of Jerusalem; and later, when Solomon's Temple was built on the adjacent Mount Moriah (which, as a result, came to be known as the Temple Mount) the meanings of the term Tzion were further extended by synecdoche to the additional meanings of the Temple itself, the hill upon which the Temple stood, the entire city of Jerusalem, the entire biblical Land of Israel, and "the World to Come", the Jewish understanding of the afterlife.

The etymology of the word Zion (ṣiyôn) is uncertain.[4][5][6] Mentioned in the Old Testament in the Books of Samuel (2 Samuel 5:7) as the name of the Jebusite fortress conquered by David, its origin likely predates the Israelites.[4][5] If Semitic, it may be derived from the Hebrew root ṣiyyôn ("castle") or the Hebrew צִיָּה ṣiyya ("dry land", Jeremiah 51:43). A non-Semitic relationship to the Hurrian word šeya ("river" or "brook") has also been suggested[6] as also one of Hittite [7] origin.

The form ציון (Tzion, Tiberian vocalization: Ṣiyyôn) appears 108 times in the Hebrew Bible, and once with article, as HaTzion.[8][9]

Tsade is usually rendered as z in English Bible translations, hence the spelling Zion (rather than Tzion). This convention apparently originates in German orthography,[10] where z is always pronounced [t͡s].

Zion is mentioned 152 times in the Hebrew Bible (Tanakh), most often in the Prophetic books, the Book of Psalms, and the Book of Lamentations, besides six mentions in the Historical books (Kings, Samuel, Chronicles) and a single mention of the "daughters of Zion" in the Song of Songs (3:11)

Out of the 152 mentions, 26 instances are within the phrase of "Daughter of Zion" (Hebrew "bat Tzion"). This is a personification of the city of Jerusalem, or of its population.[11]

In Psalm 137, Zion (Jerusalem) is remembered from the perspective of the Babylonian Captivity. "[1] By the rivers of Babylon, there we sat down, yea, we wept, when we remembered Zion. [2] We hanged our harps upon the willows in the midst thereof. [3] For there they that carried us away captive required of us a song; and they that wasted us required of us mirth, saying, Sing us one of the songs of Zion." In verse 8, the phrase "Daughter of Babylon" appears as a personification of Babylon or its population: "[8] O daughter of Babylon, who art to be destroyed; happy shall he be, that rewardeth thee as thou hast served us."

Psalm 147 uses "Jerusalem" and "Zion" interchangeably to address the faithful: "[2] The Lord doth build up Jerusalem: he gathereth together the outcast of Israel. [...] [12] Praise the Lord, O Jerusalem; praise thy God, O Zion."

The location of the Temple, and in particular its Holy of Holies (innermost sanctum), is the most holy place in the world for the Jewish people, seen as the connection between God and humanity. Observant Jews recite the Amidah three times a day facing the Temple Mount in Jerusalem, praying for the rebuilding of the Holy Temple, the restoration of the Temple service, the redemption of the world, and for the coming of the Messiah.

In Kabbalah, the more esoteric reference is made to Tzion being the spiritual point from which reality emerges, located in the Holy of Holies of the First, Second and Third Temple.[12] 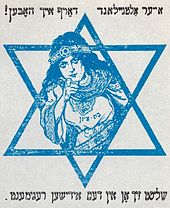 A World War I recruitment poster. The Daughter of Zion (representing the Hebrew people): "Your Old New Land must have you! Join the Jewish regiment."

The term "Zionism", coined by Austrian Nathan Birnbaum, was derived from the German rendering of Tzion in his journal Selbstemanzipation (Self Emancipation) in 1890.[13] Zionism as a political movement started in 1897 and supported a "national home", and later a state, for the Jewish people in Palestine. The Zionist movement declared the re-establishment of its State of Israel in 1948, following the United Nations Partition Plan for Palestine. Since then and with varying ideologies, Zionists have focused on developing and protecting this state.

The last line of the Israeli national anthem Hatikvah (Hebrew for "Hope") is "....Eretz Zion, ViYerushalayim", which means literally "The land of Zion and Jerusalem".

Ṣahyūn (Arabic: صهيون‎, Ṣahyūn or Ṣihyūn) is the word for Zion in Arabic and Syriac.[14][15] Drawing on biblical tradition, it is one of the names accorded to Jerusalem in Arabic and Islamic tradition.[15][16] A valley called Wādī Sahyũn seemingly preserves the name and is located approximately one and three-quarter miles from the Old City's Jaffa Gate.[14]

For example, the reference to the "precious cornerstone" of the new Jerusalem in the Book of Isaiah 28:16 is identified in Islamic scholarship as the Black Stone of the Kaaba.[17] This interpretation is said by ibn Qayyim al-Jawziyya (1292–1350) to have come from the People of the Book, though earlier Christian scholarship identifies the cornerstone with Jesus.[17]

Within the Latter Day Saint movement, Zion is often used to connote a utopian association of the righteous. This association would practice a form of communitarian economics called the United Order meant to ensure that all members maintained an acceptable quality of life, class distinctions were minimized, and group unity achieved.[not verified in body] While Zion has often been linked with theocracy, the concept of Zion did not theoretically require such a governmental system.[not verified in body] In this way, Zion must be distinguished from the ideal political system called theodemocracy which Latter Day Saints believed would be adopted upon Christ's Second Coming.

In Rastafari, "Zion" stands for a utopian place of unity, peace and freedom, as opposed to "Babylon", the oppressing and exploiting system of the materialistic modern world and a place of evil.[18]

It proclaims Zion, as reference to Ethiopia, the original birthplace of humankind, and from the beginning of the movement calls to repatriation to Zion, the Promised Land and Heaven on Earth.[19] Some Rastafari believe themselves to represent the real Children of Israel in modern times, and their goal is to repatriate to Ethiopia, or to Zion. The Ge'ez-language Kebra Nagast serves as inspiration for the idea that the "Glory of Zion" transferred from Jerusalem to Ethiopia in the time of Solomon and Sheba, c. 950 BC.

Rastafari reggae contains many references to Zion; among the best-known examples are the Bob Marley songs "Zion Train", "Iron Lion Zion", the Bunny Wailer song "Rastaman" ("The Rasta come from Zion, Rastaman a Lion!"), The Melodians song "Rivers of Babylon" (based on Psalm 137, where the captivity of Babylon is contrasted with the freedom in Zion), the Bad Brains song "Leaving Babylon", the Damian Marley song featuring Nas "Road to Zion", The Abyssinians' "Forward Unto Zion" and Kiddus I's "Graduation in Zion", which is featured in the 1977 cult roots rock reggae film Rockers, and "Let's Go to Zion" by Winston Francis. Reggae groups such as Steel Pulse and Cocoa Tea also have many references to Zion in their various songs.

The Jewish longing for Zion, starting with the deportation and enslavement of Jews during the Babylonian captivity, was adopted as a metaphor by Christian black slaves in the United States.[citation needed][year needed] Thus, Zion symbolizes a longing by wandering peoples for a safe homeland. This could be an actual place such as Ethiopia for Rastafari or Israel for the Jews. 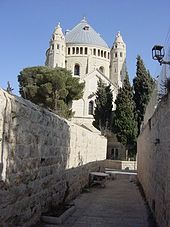 Abbey of the Dormition on the modern Mount Zion.

Today, Mount Zion refers to a hill south of the Old City's Armenian Quarter, not to the Temple Mount. This apparent misidentification dates at least from the 1st century AD, when Josephus calls Jerusalem's Western Hill "Mount Zion".[20] The Abbey of the Dormition is located upon the hill currently called Mount Zion.