Zemgus Girgensons (born 5 January 1994) is a Latvian professional ice hockey centre currently playing for the Buffalo Sabres of the National Hockey League (NHL). He was selected 14th overall in the 2012 NHL Entry Draft by the Buffalo Sabres.[1][2] With this selection, Girgensons became the highest-drafted Latvian in NHL history,[3] 16 spots higher than previous highest selection, Sandis Ozoliņš, in 1991.[1] In the previous year, Girgensons was selected in the second round, 28th overall, in the 2011 Kontinental Hockey League (KHL) Junior Draft by CSKA Moscow.[4] 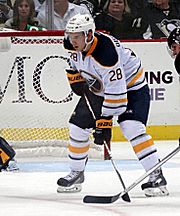 Girgensons entered his draft eligibility year as a projected first-round draft pick. He was selected by the Buffalo Sabres in the first round, 14th overall. The Sabres had already used their own first-round pick, selecting Mikhail Grigorenko 12th overall, but traded[12] a first-round (21st overall) pick (from Nashville), which Calgary used to select Mark Jankowski, and a second-round (42nd overall) pick, to move up seven spots to draft Girgensons.[12] Before attending the Sabres' prospects' summer camp, Girgensons had committed to going to the University of Vermont Catamounts of the NCAA;[13] however, he signed a professional contract with the Sabres on 13 July 2012, which forfeited his NCAA eligibility.[14][15]

Girgensons began the 2012–13 season in the American Hockey League (AHL) with the Rochester Americans. He had a slow start to the season and, at the beginning of 2013, he suffered an injury from a late hit by Richard Pánik of the Syracuse Crunch.[16] However, he finished the season strongly, scoring three goals in the Americans' first-round defeat in the Calder Cup playoffs.[17]

After scoring three goals and adding one assist in five pre-season games, Girgensons began the 2013–14 season in the NHL with the Sabres. He scored his first career NHL goal in the Sabres' season opener against Jimmy Howard of the Detroit Red Wings on 2 October 2013.[18]

Girgensons was the runaway leader in fan voting for the 2015 All-Star Game, buoyed in large part by votes from his native Latvia.[19]

Girgensons participated at the 2012 World Junior Ice Hockey Championships as a member of the Latvian junior team and at the 2010 IIHF World U18 Championships. He made his senior national team debut in 2013 World Championships against the United States and scored his first international goal against Slovakia. He also was suspended for one game for spearing Branislav Mezei in the first period of the match in retaliation for an earlier hit.[22][23][24]

On 7 January 2014, it was announced that Latvia Head Coach Ted Nolan had included Girgensons on his national team roster for the 2014 Winter Olympics in Sochi.[25] Girgensons scored his first Olympic goal in Latvia's third tournament game, coming versus Sweden off of a power play goal against Henrik Lundqvist.[26]