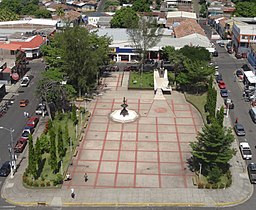 Zacatecoluca's historic center from the air.

Zacatecoluca is the capital municipality of the La Paz Department of El Salvador.

Located in Southern El Salvador, in the Rio Lempa valley, at the foot of San Vicente (Chinchotepec) Volcano. A commercial center for the surrounding agricultural area, it also trades in cotton goods, baskets, salt, and lumber.

An earthquake in 1932 caused severe damage.

Zacatecoluca was the birthplace of Jose Simeon Canas, who fought for and secured the emancipation of slaves in Central America by Spaniards in 1825.

Zacatecoluca houses many traditional Spanish buildings including the Santa Lucia Catholic Church and used to hold the house where José Simeón Cañas lived, until poor economy due to the many years of war caused the local government to sell the house to a supermarket branch, the house was destroyed and a poorly marked stone on the left of the supermarket entrance is all that is left of Cañas' housing legacy.

Santa Lucia Catholic Church holds a dear history to the people of Zacatecoluca, as an image of Virgin Mary placed on top is said to have stopped an eruption of lava and ash from completely destroying the city and its local population. On May 11th, 1844, Zacatecoluca received the title of Generous and Loyal City becoming the Departmental Head of La Paz on February 21st, 1852.

The local professional football club is named Platense and they are former national league champions. They currently play in the Salvadoran Second Division.