You Don't Mess with the Zohan

You Don't Mess with the Zohan is a 2008 American action black comedy film directed by Dennis Dugan and produced by Adam Sandler, who also starred in the film. It was the fourth film that included a collaboration of Sandler as actor and Dugan as director. The film revolves around Zohan Dvir (Hebrew: זוהן דביר‎), an Israeli army counterterrorist commando who fakes his own death in order to pursue his dream of becoming a hairstylist in New York City. The story was written by Adam Sandler, Judd Apatow, and Robert Smigel. It was released on June 6, 2008, in the US and on August 15, 2008, in the UK. The film grossed $204.3 million worldwide from a $90 million budget.[2]

Zohan Dvir (Adam Sandler) is a superhuman Israeli counter-terrorist and is the most feared and respected soldier of the Israel Defense Forces. Despite his constant success however, he has grown tired of the everlasting conflicts in his country and dreams of becoming a hairstylist at Paul Mitchell's in the United States. He finally admits to his parents his desire to cut hair, but they make fun of him. During his next mission against a Palestinian terrorist group led by his arch-enemy, superhuman Fatoush "Phantom" Hakbarah (John Turturro), Zohan fakes his own death and smuggles himself onto a plane to New York City, cuts his hair, and adopts the alias "Scrappy Coco" after two dogs (Scrappy and Coco) whom he shared the flight with. Following his "success" at killing Zohan, Phantom opens a restaurant chain called Phantom Muchentuchen.

After his arrival in the United States, Zohan immediately goes to Paul Mitchell to ask for a job. The stylists there laugh at him. He tries other salons but is also refused by other salons due to his lack of experience. Zohan befriends Michael (Nick Swardson) after defending him against a bullying motorist, and is taken in by him and his mother, Gail (Lainie Kazan). Michael is shocked to walk in on Zohan and his mother having sex. Zohan tells him "it's natural!" and it's clear Zohan loves the ladies.

Zohan then meets a fellow Israeli named Oori (Ido Mosseri), who owns an electronics store, at a disco; Oori recognizes Zohan but vows to keep his identity a secret. Zohan is taken by Oori to an area in lower Manhattan populated with Middle Eastern immigrants, including Palestinians and Israelis. Zohan attempts to land a job in a struggling salon of a Palestinian woman named Dalia (Emmanuelle Chriqui), but Dalia only allows Zohan to sweep the floors. But when one of her stylists unexpectedly quits, leaving her customers high and dry, one of the customers wants Zohan to cut her hair. He puts on a sexy shampoo bowl show and gives her an exceptional haircut, with a back room sex bonus. Zohan's reputation spreads rapidly among the elderly women of lower Manhattan, causing Dalia's business to prosper, which upsets Grant Walbridge (Michael Buffer), a corporate magnate who has been trying to buy out all the local tenants on the block so that he can build a rollercoaster mall.

Zohan is eventually identified by a Palestinian cab driver named Salim (Rob Schneider), who bears a grudge against Zohan for having taken his goat away in Palestine because Salim spat on him. Salim convinces his friends, Hamdi and Nasi, to help him kill Zohan, but after several failed attempts they are forced to contact Phantom and convince him to visit New York to find Zohan. Meanwhile, Zohan has fallen in love with Dalia and comes clean to her, Michael and Gail about his true identity. After Dalia rejects Zohan for his counterterrorist background, Zohan decides to leave her to protect her, and confronts Phantom in a championship Hacky Sack game sponsored by Walbridge. Zohan's fight is cut short with sudden news of the Middle Eastern neighborhood block being attacked, and he quickly departs.

At the scene of the fire, Zohan calms the Israelis and Palestinians, who each blame the other for the violence, and makes peace with Salim. Phantom then appears and confronts Zohan, but Zohan refuses to fight. Dalia appears, revealing that she is Phantom's sister, and convinces her brother to cooperate with Zohan against the arsonists, revealed to be racist rednecks hired by Walbridge to instigate an inter-ethnic riot so he can get his new mall in the aftermath. As Zohan and Phantom work to save the block, Phantom admits that he always wanted to be a shoe salesman rather than a terrorist. Although the rednecks are defeated and Walbridge is jailed, the overexcited Phantom accidentally destroys all of the shops on the block with his powers.

With the Israelis and Palestinians united, the block is rebuilt and transformed into a collectively owned mall. Phantom opens a shoe shop there; Oori relocates his electronics shop to the mall; Salim gets back his goat (and starts a goat ride business); and Zohan and Dalia, having now married, open a beauty salon together. In the end, Zohan's parents, initially unsupportive of his dream to be a hairdresser, show up, approving of his new job and lifestyle before his father requests that he cut his hair, which Zohan happily does. 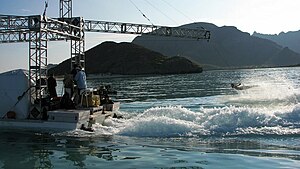 Filming of one of the scenes while in Mexico

Sandler, Robert Smigel, and Judd Apatow wrote the first draft of the script in 2000, but the movie was delayed after the events of 9/11 because those involved felt that the subject would be too sensitive. Apatow left the project after the first draft in 2000 to work on his show Undeclared and had, for the most part, not been involved in the project since.[3] The film is based in part on the story of Nezi Arbib, an Israeli soldier who after his service moved to southern California and opened a hair salon. Sandler trained with Arbib and his brothers, also former soldiers, for two weeks to learn hairstyling and work with clients.[4] The movie features elements that first appeared in the SNL sketches "Sabra Shopping Network" and "Sabra Price Is Right," which starred Tom Hanks and were written by Robert Smigel. They originated lines such as 'Sony guts' and 'Disco, Disco, good, good'. The first sketch is also notable for featuring one of Adam Sandler's first (uncredited) television appearances while the second featured Sandler, Schneider, Smigel and Kevin Nealon in supporting parts. Robert Smigel worked with Sandler on past films including Billy Madison, Happy Gilmore, and Little Nicky, but this was the first time in which he was credited for helping to write the script. He was also an executive producer on the film which allowed him to further contribute to the movie's comedic sensibility. The Israeli newspaper Haaretz commented that the movie was known in Hollywood circles as "the Israeli movie." Haaretz also noted that while "Israeli actors were rushing to audition [for the movie]," the response among Arab actors was far from enthusiastic.[5] (Emmanuelle Chriqui, who played Zohan's Palestinian love interest, was raised as an Orthodox Jew.[6]) The film poked fun at the popularity of hummus in Israeli culture. In the movie, characters used it to brush their teeth and as a method to douse the flames of a fire,[7][8] as well as a hair care product.[9]

The score to the film was composed by Rupert Gregson-Williams. He recorded his score with the Hollywood Studio Symphony at the Sony Scoring Stage in April 2008.[10] The soundtrack contains many songs in Hebrew, mostly by the popular Israeli band Hadag Nahash, the psychedelic trance duo Infected Mushroom, and Dana International. The film features "Strip" by Adam Ant, "Look on the Floor (Hypnotic Tango) (Angel City Remix)" by Bananarama, the Ace of Base songs "Hallo Hallo" and "Beautiful Life", the Rockwell song Somebody's Watching Me and Mariah Carey songs Fantasy and "I'll Be Lovin' U Long Time".

The soundtrack contains (near the end) music re-arranged for the movie by Julius Dobos, based on the song "Jimmy Jimmy Jimmy Aaja" from the Bollywood movie Disco Dancer (1982) starring Mithun Chakraborty.

Rotten Tomatoes gives the film a score of 37% based on 188 reviews; the site's consensus is that the film "features intermittent laughs, and will please Sandler diehards, but after a while the leaky premise wears thin."[11] Metacritic gives the film a rating of 54 out of 100, based on 37 reviews—indicating mixed or average reviews.[12]

John Podhoretz, in The Weekly Standard, wrote that the movie has a "mess" of a plot and features, "as usual for Sandler, plenty of dumb humor of the sort that gives dumb humor a bad name, but that delights his 14-year-old-boy fan base." But the film also has an "unusual" amount of "tantalizing comic ideas" so that "every 10 minutes or so, it makes you explode with laughter."[6] Entertainment Weekly gave the movie a C+ grade, calling it "another 'mess' from Sandler" which is, unlike Monty Python, a "circus that never flies."[13]

On the positive side, Time claimed the film to be a "laff scuffle,"[14] and Roger Ebert of the Chicago Sun-Times gave the film 3 out of 4 stars.[15] David Edelstein of New York Magazine went as far as to say "Adam Sandler is mesmerizing,"[16] and A.O. Scott of The New York Times said it was "the finest post-Zionist action-hairdressing sex comedy I have ever seen."[17]

You Don't Mess with the Zohan grossed $38 million on its opening weekend, ranked second behind Kung Fu Panda. As of September 7, 2008[update], it reached a US tally of $100 million. The film grossed $204.3 million worldwide.[2]