Yoshihide Suga (菅 義偉, Suga Yoshihide, born 6 December 1948) is a Japanese politician who has served as prime minister of Japan and president of the Liberal Democratic Party (LDP) since September 2020, becoming the first new Prime Minister of the Reiwa era.[1] Suga previously served as Chief Cabinet Secretary under Prime Minister Shinzo Abe from 2012 to 2020, making him the longest-serving Chief Cabinet Secretary in Japanese history. Suga was also Minister for Internal Affairs and Communications from 2006 to 2007.

Born into a modest family in rural Akita Prefecture, Suga moved to Tokyo after graduating from high school, where he enrolled in Hosei University.[2] Shortly after graduating with a Bachelor of Laws, Suga became an aide to Representative Hikosaburo Okonogi in 1975 before entering politics himself when he was elected to the Yokohama Municipal Assembly in 1987.[3] In the 1996 election, Suga was elected to the House of Representatives, representing Kanagawa's 2nd District as a member of the LDP.

During his time in the Diet, Suga became a close ally of Chief Cabinet Secretary Shinzo Abe. When Abe first became Prime Minister in 2006, he appointed Suga to the Cabinet as Minister for Internal Affairs and Communications. Abe later appointed Suga as Chief Cabinet Secretary in 2012 upon his return as Prime Minister, a role Suga would hold throughout Abe's second term.[4] In September 2020, after Abe announced his retirement from politics, Suga declared his candidacy in the LDP leadership election. Widely considered the frontrunner, Suga comfortably won the election on 14 September with 70% of the vote. Two days later, he was formally elected Prime Minister by the Diet, and appointed by Emperor Naruhito.[5]

Suga has stated that his premiership will focus on continuing the policies and goals of the Abe administration, including the Abenomics suite of economics policies, the revision of Article 9 of the Japanese Constitution and securing the release of Japanese abductees from North Korea.[6]

Suga was born to a family of strawberry farmers in Ogachi (now Yuzawa), a rural area in Akita Prefecture, and moved to Tokyo after graduation from Yuzawa High School. He attended night school to obtain a Bachelor of Laws from Hosei University in 1973.[7][8] Suga chose Hosei "because it was the cheapest option available" and he "worked in a cardboard factory in Tokyo to pay his tuition".[9]

After graduating from university, Suga worked on a House of Councillors (upper house) election campaign, and thereafter worked as secretary to LDP Diet Member Hikosaburo Okonogi, father of LDP politician Hachiro Okonogi, for eleven years. Suga resigned from this position in October 1986 to pursue his own career in politics.[10] He was elected to the Yokohama City Council in April 1987, campaigning door-to-door on foot, visiting as many as 30,000 houses and wearing through six pairs of shoes.[11][12] He pioneered the practice of giving campaign speeches in front of busy train stations, which is now common among Japanese political candidates.[13] 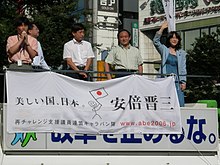 Suga was elected to the Diet of Japan in the 1996 general election, representing the Kanagawa 2nd district. In his third year in the Diet, he shifted his support from Prime Minister Keizo Obuchi to former LDP Secretary-General Seiroku Kajiyama, an unusual move for a junior legislator.[14][13] He was re-elected in the 2000 general election, 2003 general election, and 2005 general election.[citation needed]

He was appointed Senior Vice Minister for Internal Affairs and Communications in November 2005 under Prime Minister Junichiro Koizumi. He was promoted to Minister of Internal Affairs and Communications and Minister for Privatization of the Postal Services in the first Shinzo Abe cabinet in September 2006, and added the portfolio of Minister of State for Decentralization Reform in December 2006.[11] He was instrumental in the development of Japan's "hometown donation" (ふるさと納税, furusato nōzei) system, which allowed taxpayers to obtain deductions by donating money to local governments.[7] He was replaced by Hiroya Masuda in a cabinet reshuffle in August 2007.[15]

His "street-corner" campaigning style was credited with holding his seat in the 2009 general election, when many other LDP lawmakers lost their seats amid a surge in support for the Democratic Party of Japan.[14]

Suga remained close to Shinzo Abe during the late 2000s and early 2010s, and urged Abe to run for the LDP presidency in 2012.[7] Unlike many of Abe's other allies, Suga pushed Abe to focus on the economy rather than Abe's long-standing ambition to revise Article 9 of the Constitution, which prohibits Japan from using a military as means of settling international disputes.[14]

As Chief Cabinet Secretary, Suga served as an aide and advisor to Abe, and took an active managerial role in the government. He had a key role in the government's initiatives to attract tourists and foreign workers and reduce mobile telephone rates.[9] He formed a team to reexamine the lead-up to the Kono Statement of 1993 but the group was soon after disbanded without ever reaching a consensus.[17] He was affiliated with the openly nationalist organisation Nippon Kaigi.[18] Under Abe, Suga overcame party resistance to implement a visa program that opened the doors for unskilled foreign workers, a shift from the previous policy, which centered on internship programs that often confined foreign workers to low-paying jobs.[19] He was also supportive of aggressive measures by the Bank of Japan to counter deflation.[20] In 2015, he was criticized for publicly encouraging Japanese women to "contribute to their country" by having more children.[21] He continued to hold his seat in the 2014 general election and 2017 general election.[citation needed] 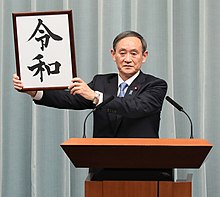 Suga gained domestic and international fame when he announced the name of the new imperial era, Reiwa, on 1 April 2019.[22] While he had previously been a low-profile member of the government, this honor gave him an instant surge in name recognition and led more LDP lawmakers to view him as a viable candidate for party leadership.[7][16] He was sent to Washington in May 2019 for a meeting with U.S. Vice President Mike Pence and other senior officials, fueling speculation that he was being groomed to serve as Abe's successor.[8][9] Suga faced scrutiny later that year due to the resignations of Cabinet ministers Katsuyuki Kawai and Isshu Sugawara, both of whom had been close associates of Suga and were accused of campaign financing violations.[16] Suga also remained politically active during this time, coordinating support for the LDP candidate in the 2019 Hokkaido gubernatorial election, a role typically reserved for top LDP officials.[9]

Suga served as a key Abe deputy during the response to the COVID-19 pandemic in 2020. He criticized the structure of the Japanese bureaucracy, with deep divisions between ministries, as stalling coordination to stop the spread of the virus.[23]

Following Shinzo Abe's resignation announcement in August 2020, Suga emerged as the leading contender to replace him in the upcoming leadership election, having gained the support of Deputy Prime Minister Tarō Asō and LDP Secretary-General Toshihiro Nikai, as well as the two largest factions in the LDP and supposedly even Abe himself.[24] Suga's main competitors in the LDP leadership race were longtime Abe rival Shigeru Ishiba and LDP policy chief Fumio Kishida.[25][26]

Suga was elected to the presidency of the Liberal Democratic Party on 14 September 2020, with 377 votes out of a total of 534.[27] Upon his election, Suga outlined a policy agenda that included tackling the ongoing COVID-19 pandemic and implementing further deregulation to revitalize the economy. He reiterated his past interest in consolidating regional banks and lowering mobile phone charges in Japan.[28][29]

Suga is married and has three sons.[30] His wife, Mariko, was a sister of his co-worker in the office of Hikosaburo Okonogi.[31]

Suga has a daily fitness routine, which includes doing 100 situps and 40 minutes of walking each morning, and 100 situps each night. He started this routine after a doctor advised him to lose weight, and lost 14 kg in four months.[13]