Toronto Amalgamation of Toronto Etobicoke
This article is about the former city that was amalgamated into Toronto in 1998. For the regional municipality north of Toronto, see Regional Municipality of York. For the town that existed 1793–1834 and became Toronto, see York, Upper Canada. For other uses, see York (disambiguation).
Dissolved municipality in Ontario, Canada

York is a former city within the current city of Toronto, Ontario, Canada. It is located northwest of Old Toronto, southwest of North York and east of Etobicoke, where it is bounded by the Humber River. As a separate city, it was one of six municipalities that amalgamated in 1998 to form the current city of Toronto. The City of York was created by the amalgamation of several villages, including the present-day neighbourhoods of Lambton Mills and Weston.

York Township was incorporated by Canada West in 1850 (Canada West later became Ontario in 1867, due to Confederation), bounded in the west by the Humber River, in the east by what would become Victoria Park Avenue, and in the north by what would become Steeles Avenue. Etobicoke Township and Scarborough Township were located west and east, respectively, while the townships of Vaughan and Markham bordered on the north.

York Township was home to one of the original Black communities in the Toronto area, which was populated by many African American fugitive slaves.[1] By 1861, the township had the second-largest Black population in the Toronto area, after St. John's Ward, most of whom lived in York Township West (located west of Yonge Street and north of Bloor Street).[1] The legacy of York's original Black community continues today; as of the 2016 Census, 17% of York's population is Black, the largest percentage of all six former municipalities.[2]

Oakwood Village from Oakwood Avenue, north of St. Clair Avenue in 1924. The area was initially developed as a streetcar suburb.

Humewood-Cedarvale was developed in the 1910s to attract development in the growing township. Oakwood Village was also developed during this time. In the 1920s, the character of the township changed, with its southern reaches abutting the city of Toronto taking on a more urban character, compared with the very rural character of the north. The decision was made to split the township in two, with the northern, rural portion becoming North York in 1922. The remaining, two pockets of unincorporated urban development at the north end of the city, were split by the village of North Toronto, which was by then a part of the City of Toronto.

Within years, the Province of Ontario saw that this arrangement of having an exclave was impractical, and further subdivided York, creating the township of East York out of the eastern pocket. The Township of York contracted streetcar and bus services from the Toronto Transportation Commission (later became Toronto Transit Commission in 1954), but remained independent from Toronto. During this time, American novelist and journalist Ernest Hemingway resided in the Humewood–Cedarvale community, writing for the Toronto Star.

North and west of Oakwood Village is the Fairbank community. Silverthorn is west of Fairbank. Silverthorn (and Fairbank) is described as "Toronto's hidden San Francisco" in reference to its "steep streets, staircases, and unusual views of houses built in what must be the hilliest part of the city."[3] This is due to Toronto's topography being shaped by its deep ravines being similar to the hills of San Francisco.

Another community in York, Mount Dennis, contained the former campus of Kodak's Canadian operation, which is being repurposed for Line 5 Eglinton's Eglinton Maintenance and Storage Facility.

In 1954, York, along with other municipalities south of Steeles Avenue were severed from York County, forming the new upper-tier government of Metropolitan Toronto. In 1967, it absorbed the town of Weston, and became the Borough of York, later known as the City of York. (The map shows this area in red). York was amalgamated into the new City of Toronto on 1 January 1998. Its former council and administrative building, York Civic Centre, is located at 2700 Eglinton Avenue West, between Black Creek Drive and Keele Street. 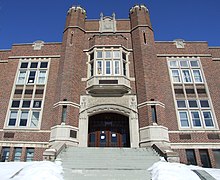 Before York was amalgamated with the rest of Metropolitan Toronto, the York Board of Education oversaw public secular schools in the former city. As with the other school boards in Metro Toronto, they were amalgamated to form TDSB in 1998. Presently, the school board operates several institutions that offer primary and secondary education. Secondary schools in York that are operated by TDSB include:

TDSB formerly operated another secondary school in York, Vaughan Road Academy. Opened in 1927, the secondary school was York's first but was closed on its 90th anniversary in 2017 due to its lack of student population resulting from students in the local catchment area attending other nearby high schools. Vaughan Road Academy is repurposed as a temporary elementary school for students in the Yonge and Davisville area in Midtown Toronto since the 2018–19 school year to accommodate the construction of a new school building.[4][5]

York's first public library was the Mount Dennis branch, which operated out of rented premises since 1923.[6] In 1945, the Township of York Public Library Board was established, and proceeded to build three new library buildings that opened in 1951, including the Jane/Dundas library, Main Library (Eglinton Avenue one block east of Dufferin Street), and the Mount Dennis Library.[6][7][8] The Main Library was later renamed after head librarian Maria Shchuka and was later rebuilt in 2003. The Oakwood Village branch was York's newest library; opening a year before the municipalities of Metropolitan Toronto amalgamated.

See also: History of the Toronto Transit Commission and Public transportation in Toronto

York is served by the Toronto Transit Commission's buses, streetcar, and subway system. Early in the community's history, York had operated its own bus and streetcar service, until it was absorbed by the Toronto Transit Commission. Of the Toronto subway system, only the Heath Street exit of St. Clair West station on Line 1 Yonge–University is in the former city of York. The Rogers Road streetcar line served the namesake street as well. 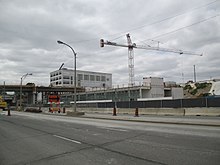 Mount Dennis station under construction in 2018

The TTC once had plans to construct the Eglinton West subway line along Eglinton Avenue in the former city of York. However, it was cancelled in 1995 under premier Mike Harris and there had been no serious discussion about reviving the line until 2007, when Line 5 Eglinton (then known as the Eglinton Crosstown LRT) was proposed as part of David Miller's Transit City.

When Rob Ford became mayor in 2010, he immediately announced the cancellation of Transit City. However, city council spared a few lines, including the Eglinton Crosstown LRT, from cancellation, despite Ford's objections. 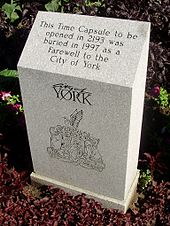 A time capsule outside the York Civic Centre, a building that formerly housed York's City Council. It also depicts the city's logo and coat of arms, which contains the city's motto in Latin.

On a provincial and federal level of governance, eligible residents of York are also able to vote for members of the Parliament of Canada, and the Legislative Assembly of Ontario. Additionally, as a part of the City of Toronto, York takes part in Toronto municipal elections, with eligible residents able to vote on the Mayor of Toronto, as well as councillors to the Toronto City Council. Prior to York's amalgamation with Toronto, York operated its own municipal council, with a mayor heading York's council. Prior to the municipality's incorporation as a borough, the chief magistrate of the council was referred to as a reeve.

The following individuals served as the reeves of the Township of York:

The following individuals served as the Deputy Mayor of York:

The following individuals served on York's Board of Control:

Names in boldface indicate Controllers that were or became Mayor of York in other years.