Yigal Allon[1] (Hebrew: יגאל אלון‎‎; 10 October 1918 – 29 February 1980) was an Israeli politician, a commander of the Palmach, and a general in the IDF. He served as one of the leaders of Ahdut HaAvoda party and the Israeli Labor party, and acting Prime Minister of Israel. He was a Knesset member and government minister from the third Knesset to the ninth inclusive.

Yigal Peikowitz (later Allon) was born in Kfar Tavor. His father immigrated to Palestine in 1890.[2]

After graduating from Kadoorie Agricultural High School in 1937, Allon became one of the founders of Kibbutz Ginosar.[3] Allon was married to Ruth. Their eldest daughter Nurit, was on the Autism spectrum.[4]

Allon died of heart failure in Afula[6] on 29 February 1980. He was buried on the shore of Sea of Galilee in the cemetery of Kibbutz Ginosar (Kibbutz Ginosar Cemetery) in the Northern District.[7] The funeral was attended by tens of thousands of mourners, with condolences extended by many world leaders, including Egyptian president Anwar Sadat.[8]

Allon joined Haganah in 1931 and went on to command a field unit and then a mobile patrol in northern Palestine during the 1936–1939 Arab revolt in Palestine.[9] During this period he participated in several operations of the Special Night Squads (SNS), under the command of Orde Charles Wingate and Bala Bredin. In 1941 he became one of the founding members of the Palmach. In 1941 and 1942, he was a scout with the British forces who fought in Syria and Lebanon.[10] In 1945, he became Commander in Chief of the Palmach.[11]

On 22 June 1948, at the climax of David Ben-Gurion's confrontation with the Irgun over the distribution of weapons from the Altalena, Allon commanded the troops ordered to shell the vessel.[12] During the 1948 Arab–Israeli War, Allon led several of the major operations on all three fronts, including Yiftach in the Galilee, Danny in the Centre, Yoav, and Horev in the Negev. His last major military roles as commander were in October and December 1948: Operation Yoav towards the Hebron Hills and Operation Horev along the Southern Egyptian Front. As Operational Commander of the Southern Command he was responsible for security along the borders with Egypt and parts of Jordan. On 4 June 1949 he declared a 8 kilometres (5 mi) wide closed military zone along the border.[13] On 18 October 1949, while he was in an official visit in Paris, Allon was told by his French hosts that Ben Gurion had decided to replace Allon as OC Southern Command and appointed Moshe Dayan in his place. Most of Allon’s staff officers resigned in protest.[14] He retired from active service in 1950.[15] 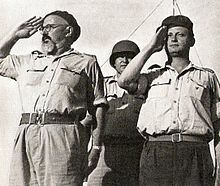 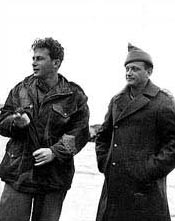 In January 1948, Allon helped form the left-wing Mapam party. However, after the 1948 war, Prime Minister David Ben-Gurion told Allon to dissociate himself from the party, a rival of his own governing Mapai party, as he saw it as too left-wing and a threat to state security.[16] In December 1948, Mapam co-leader Meir Ya'ari criticized Allon's use of tens of thousands of Palestinian refugees to achieve strategic goals.[17]

After ending his military career, Allon embarked on a public political career. He became a prominent leader in Ahdut HaAvoda, which had split from Mapam in 1954, and was first elected to the Knesset in 1955, where he served until his death. He was a member of the Economic Affairs Committee, Constitution, Law and Justice Committee, Education and Culture Committee, Joint Committee on the Motion for the Agenda Regarding Sports in Israel, and the Foreign Affairs and Defense Committee.

Allon served as the Minister of Labour from 1961–1968. In this role he worked to improve the state employment service, extend the road network, and fought to get legislation on labor relations passed. From 1968–69 he served as the Deputy Prime Minister and Minister of Immigrant Absorption. Allon served briefly as interim Prime Minister following the death of Levi Eshkol on 26 February 1969. He held office until 17 March 1969, when Golda Meir took over after being appointed leader of the Labor Party. He became the Deputy Prime Minister and Minister of Education and Culture in Meir's government, and served in that post until 1974. During the September 1970 crisis in Jordan he advocated supporting King Hussein in his conflict with the PLO.[18] In 1974 he was a part of the delegation to the Separation of Forces Agreement. He became the Minister of Foreign Affairs in 1974, and held this post until 1977.[19][20] At the time of his sudden death in 1980, he was a candidate for the leadership of the Alignment, challenging the incumbent party head Shimon Peres.

Allon was the architect of the Allon Plan, a proposal to end Israeli occupation of parts of the West Bank with a negotiated partition of territories.[21] The plan was presented to the cabinet in July 1967, right after the Six-Day War. According to the plan, Israel would retain one-third of the West Bank and protect itself from invasion from the east by a strip of settlements and military installations along the Jordan Valley. The mountain ridge west of this strip, which was populated by Arabs, would be confederated with Jordan. A strip of land flanking the Jericho-Jerusalem road, Gush Etzion and a large part of the Hebron Hills area, would be annexed. Minor territorial changes would be made along the Green Line, specifically in the area of Latrun. Allon also called for the development of Jewish neighborhoods in east Jerusalem, the rehabilitation of the Old City's Jewish Quarter, and the annexation of Gaza, whose Arab inhabitants would be resettled elsewhere.[22]

Explaining the growing admiration for Yigal Allon three decades after his death, Oren Dagan of the Society for the Preservation of Israel Heritage Sites said, "people wish to live in the kind of state Yigal Allon dreamed of, for example on the Arab-Jewish issue. This isn't a post-Zionist approach, neither hesitant nor apologetic. It's an approach of safety and security that says, 'Our place is here,' but still emphasizes the importance of dialogue, and never through condescension or arrogance. Allon extended a hand in peace, and that's the approach we want leaders to adopt today."[23]