Boris and Gleb Sviatopolk I of Kiev Anne of Kiev
For other uses, see Yaroslav the Wise (disambiguation).
Grand Prince of Kiev and Novgorod

A son of Vladimir the Great, the first Christian Prince of Kiev, Yaroslav acted as vice-regent of Novgorod at the time of his father's death in 1015. Subsequently, his eldest surviving brother, Sviatopolk I of Kiev, killed three of his other brothers and seized power in Kiev. Yaroslav, with the active support of the Novgorodians and the help of Varangian mercenaries,[2] defeated Svyatopolk and became the Grand Prince of Kiev in 1019. Under Yaroslav the codification of legal customs and princely enactments began, and this work served as the basis for a law code called the Russkaya Pravda ("Rus Truth [Law]"). During Yaroslav's lengthy reign, Kievan Rus' reached the zenith of its cultural flowering and military power.[2]

Rise to the throne

Depiction of Yaroslav the Wise from Granovitaya Palata.

The early years of Yaroslav's life are mostly unknown. He was one of the numerous sons of Vladimir the Great, presumably his second by Rogneda of Polotsk,[3] although his actual age (as stated in the Primary Chronicle and corroborated by the examination of his skeleton in the 1930s) would place him among the youngest children of Vladimir. It has been suggested that he was a child begotten out of wedlock after Vladimir's divorce from Rogneda and marriage to Anna Porphyrogenita, or even that he was a child of Anna Porphyrogenita herself. Yaroslav figures prominently in the Norse sagas under the name Jarisleif the Lame; his legendary lameness (probably resulting from an arrow wound) was corroborated by the scientists who examined his remains.[citation needed]

In his youth, Yaroslav was sent by his father to rule the northern lands around Rostov but was transferred to Veliky Novgorod,[4] as befitted a senior heir to the throne, in 1010. While living there, he founded the town of Yaroslavl (literally, "Yaroslav's") on the Volga River. His relations with his father were apparently strained,[4] and grew only worse on the news that Vladimir bequeathed the Kyivan throne to his younger son, Boris. In 1014 Yaroslav refused to pay tribute to Kyiv and only Vladimir's death, in July 1015, prevented a war.[4]

During the next four years Yaroslav waged a complicated and bloody war for Kyiv against his half-brother Sviatopolk I of Kyiv, who was supported by his father-in-law, Duke Bolesław I Chrobry (King of Poland from 1025).[5] During the course of this struggle, several other brothers (Boris, Gleb, and Svyatoslav) were brutally murdered.[5][6] The Primary Chronicle accused Svyatopolk of planning those murders,[5] while the saga Eymundar þáttr hrings is often interpreted as recounting the story of Boris' assassination by the Varangians in the service of Yaroslav. However, the victim's name is given there as Burizaf, which is also a name of Boleslaus I in the Scandinavian sources. It is thus possible that the Saga tells the story of Yaroslav's struggle against Svyatopolk (whose troops were commanded by the Polish duke), and not against Boris.[citation needed] 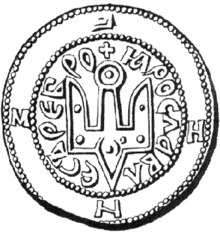 Coins of Yaroslav and his descendants represent the trident.

Yaroslav defeated Svyatopolk in their first battle, in 1016, and Svyatopolk fled to Poland.[5] But Svyatopolk returned in 1018 with Polish troops furnished by his father-in-law, seized Kyiv[5] and pushed Yaroslav back into Novgorod. Yaroslav, at last, prevailed over Svyatopolk, and in 1019 firmly established his rule over Kyiv.[7] One of his first actions as a grand prince was to confer on the loyal Novgorodians (who had helped him to gain the Kyivan throne), numerous freedoms, and privileges. Thus, the foundation of the Novgorod Republic was laid. For their part, the Novgorodians respected Yaroslav more than they did other Kyivan princes; and the princely residence in their city, next to the marketplace (and where the veche often convened) was named Yaroslav's Court after him. It probably was during this period that Yaroslav promulgated the first code of laws in the lands of the East Slavs, the Russkaya Pravda.

Leaving aside the legitimacy of Yaroslav's claims to the Kievan throne and his postulated guilt in the murder of his brothers, Nestor the Chronicler and later Russian historians often presented him as a model of virtue, styling him "the Wise". A less appealing side of his personality is revealed by his having imprisoned his youngest brother Sudislav for life. Yet another brother, Mstislav of Chernigov, whose distant realm bordered the North Caucasus and the Black Sea, hastened to Kiev and, despite reinforcements led by Yaroslav's brother-in-law King Anund Jacob of Sweden (as Jakun - "blind and dressed in a gold suit"),[8] inflicted a heavy defeat on Yaroslav in 1024. Yaroslav and Mstislav then divided Kievan Rus' between them: the area stretching left from the Dnieper River, with the capital at Chernihiv, was ceded to Mstislav until his death in 1036.

Allies along the Baltic coast

In his foreign policy, Yaroslav relied on a Scandinavian alliance and attempted to weaken the Byzantine influence on Kiev. In 1030, he conquered Cherven Cities from the Poles followed by the construction of Sutiejsk to guard the newly acquired lands. Yaroslav concluded an alliance with Polish King Casimir I the Restorer, sealed by the latter's marriage to Yaroslav's sister, Maria. In another successful military raid the same year, he captured Tartu, Estonia and renamed it Yuryev[9] (named after Yury, Yaroslav's patron saint) and forced the surrounding Ugandi County to pay annual tribute.

Yaroslav presented his second direct challenge to Constantinople in 1043, when Rus' flotilla headed by one of his sons appeared near Constantinople and demanded money, threatening to attack the city otherwise. Whatever the reason, the Greeks refused to pay and preferred to fight. The Rus' flotilla defeated the Byzantine fleet but was almost destroyed by a storm and came back to Kyiv empty-handed.[10]

Protecting the inhabitants of the Dnieper from the Pechenegs

To defend his state from the Pechenegs and other nomadic tribes threatening it from the south he constructed a line of forts, composed of Yuriev, Bohuslav, Kaniv, Korsun, and Pereyaslavl. To celebrate his decisive victory over the Pechenegs in 1036 (who thereafter were never a threat to Kiev) he sponsored the construction of the Saint Sophia Cathedral in 1037. That same year there were built monasteries of Saint George and Saint Irene. Some mentioned and other celebrated monuments of his reign such as the Golden Gate of Kiev perished during the Mongol invasion of Rus', but later restored.

Yaroslav was a notable patron of book culture and learning. In 1051, he had a Slavic monk, Hilarion of Kiev, proclaimed the metropolitan bishop of Kiev, thus challenging the Byzantine tradition of placing Greeks on the episcopal sees. Hilarion's discourse on Yaroslav and his father Vladimir is frequently cited as the first work of Old East Slavic literature. 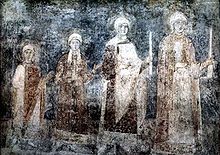 Eleventh-century fresco of Saint Sophia's Cathedral, Kiev, representing the daughters of Yaroslav I, with Anne probably being the youngest. Other daughters were Anastasia, wife of Andrew I of Hungary; Elizabeth, wife of Harald Harðráði; and possibly Agatha, wife of Edward the Exile.

In 1019, Yaroslav married Ingegerd Olofsdotter, daughter of the king of Sweden,[11] and gave Staraya Ladoga to her as a marriage gift.

Saint Sophia's Cathedral in Kiev houses a fresco representing the whole family: Yaroslav, Irene (as Ingegerd was known in Rus), their four daughters and six sons.[12] Yaroslav had at least three of his daughters married to foreign princes who lived in exile at his court: 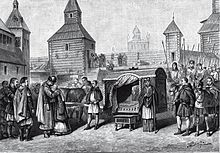 Yaroslav had one son from the first marriage (his Christian name being Ilya (?-1020)), and six sons from the second marriage. Apprehending the danger that could ensue from divisions between brothers, he exhorted them to live in peace with each other. The eldest of these, Vladimir of Novgorod, best remembered for building the Cathedral of St. Sophia, Novgorod, predeceased his father. Three other sons—Iziaslav I, Sviatoslav II, and Vsevolod I—reigned in Kiev one after another. The youngest children of Yaroslav were Igor Yaroslavich (1036–1060) of Volhynia and Vyacheslav Yaroslavich (1036–1057) of the Principality of Smolensk. About Vyacheslav, there is almost no information. Some documents point out the fact of him having a son, Boris Vyacheslavich, who challenged Vsevolod I sometime in 1077-1078. 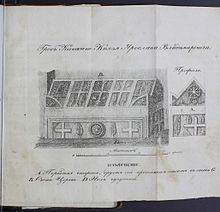 Sarcophagus of Yaroslav the Wise.

Following his death, the body of Yaroslav the Wise was entombed in a white marble sarcophagus within Saint Sophia's Cathedral. In 1936, the sarcophagus was opened and found to contain the skeletal remains of two individuals, one male and one female. The male was determined to be Yaroslav, however, the identity of the female was never established. The sarcophagus was again opened in 1939 and the remains removed for research, not being documented as returned until 1964. Then, in 2009, the sarcophagus was opened and surprisingly found to contain only one skeleton, that of a female. It seems the documents detailing the 1964 reinterment of the remains were falsified to hide the fact that Yaroslav's remains had been lost. Subsequent questioning of individuals involved in the research and reinterment of the remains seems to point to the idea that Yaroslav's remains were purposely hidden prior to the German occupation of Ukraine and then either lost completely or stolen and transported to the United States where many ancient religious artifacts were placed to avoid "mistreatment" by the communists.[13]

Four different towns in four different countries were founded by and named after Yaroslav: Yaroslavl (in today's Russia), Yuryev (now Tartu, Estonia) and another Yuryev (now Bila Tserkva, Ukraine), and Jarosław in Poland. Following the Russian custom of naming military objects such as tanks and planes after historical figures, the helmet worn by many Russian soldiers during the Crimean War was called the "Helmet of Yaroslav the Wise". It was the first pointed helmet to be used by a modern army, even before German troops wore pointed helmets.

In 2008 Yaroslav was placed first (with 40% of the votes) in their ranking of "our greatest compatriots" by the viewers of the TV show Velyki Ukraïntsi.[14] Afterwards one of the producers of The Greatest Ukrainians claimed that Yaroslav had only won because of vote manipulation and that (if that had been prevented) the real first place would have been awarded to Stepan Bandera.[15]

Monument to Yaroslav the Wise in Kiev

In 2003 a monument to Yaroslav the Wise was erected in Kyiv, Ukraine. The authors of the monument are Boris Krylov and Oles Sydoruk.

Iron Lord was a 2010 feature film based on his early life as a regional prince on the frontier.