Abū Yūsuf Yaʿqūb ibn Yūsuf ibn Abd al-Muʾmin al-Manṣūr (Arabic: أبو يوسف يعقوب بن يوسف بن عبد المؤمن المنصور‎; c. 1160 Morocco – 23 January 1199 Marrakesh, Morocco), commonly known as Jacob Almanzor (Arabic: يعقوب المنصور‎) or Moulay Yacoub (مولاي يعقوب), was the third Almohad Caliph.[1] Succeeding his father, al-Mansur reigned from 1184 to 1199. His reign was distinguished by the flourishing of trade, architecture, philosophy and the sciences, as well as by victorious military campaigns in which he was successful in repelling the tide of Christian Reconquista in the Iberian Peninsula.

His 13 July 1190 siege of Tomar, center of the Portuguese Templars failed to capture the fortress. However, further south he in 1191 recaptured a major fortress, Paderne Castle and the surrounding territory near Albufeira, in the Algarve – which had been controlled by the Portuguese army of King Sancho I since 1182. Having inflicted other defeats on the Christians and captured major cities, he returned to Morocco with three thousand Christian captives.

Upon Al-Mansur's return to Africa, however, Christians in Iberian Peninsula resumed the offensive, capturing many of the Moorish cities, including Silves, Vera, and Beja.

When Al-Mansur heard this news, he returned to the Iberian Peninsula, and defeated the Christians again. This time, many were taken in chained groups of fifty each, and later sold in Africa as slaves.

While Al-Mansur was away in Africa, the Christians mounted the largest army of that period, of over 300,000 men, to defeat Al-Mansur. However, immediately upon hearing this, Al-Mansur returned again to Iberia and defeated Castilian King Alfonso VIII Alfonso's army in the Battle of Alarcos, on 18 July 1195. It was said that Al-Mansur's forces killed 150,000 and took money, valuables and other goods "beyond calculation". It was after this victory that he took the title al-Mansur Billah ("Made Victorious by God").[1] 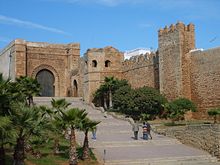 During his reign, Al-Mansur undertook several major construction projects. He added a monumental gate to the Kasbah of the Udayas in Rabat and he may have been responsible for finishing the construction of the current Kutubiyya Mosque in Marrakesh. He also created a vast royal citadel and palace complex in Marrakesh which subsequently remained the seat of government in the city for centuries afterwards. This royal district included the Kasbah Mosque (or El-Mansuriyya Mosque) in Marrakesh and was accessed via the monumental gate of Bab Agnaou, both dating from al-Mansur's time. He also embarked on the construction of an even bigger fortified capital in Rabat, where he attempted to build what would have been the world's largest mosque. However, construction on the mosque and on this new citadel stopped after his death. Only the beginnings of the mosque had been completed, including a large part of its massive minaret now known as the Hassan Tower. Some of Rabat's historic gates, most notably Bab er-Rouah, also date from this time.[2][3][4]

Al-Mansur protected the philosopher Averroes and kept him as a favorite at court. Like many of the Almohad caliphs, Al-Mansur was religiously learned. He favored the Zahirite or literalist school of Muslim jurisprudence per Almohad doctrine and possessed a relatively extensive education in the Muslim prophetic tradition; he even wrote his own book on the recorded statements and actions of the prophet Muhammad.[5] Mansur's Zahirism was clear when he ordered his judges to exercise judgment only according to the Qur'an, said recorded statements and absolute consensus. Mansur's father Abu Yaqub appointed Cordoban polymath Ibn Maḍāʾ as chief judge, and the two of them oversaw the banning of all non-Zahirite religious books during the Almohad reforms;[6] Mansur was not satisfied, and when he inherited the throne he ordered Ibn Maḍāʾ to actually undertake the burning of such books.[7]

The Almohad Empire, under the reign of Abu Yusuf Yaqub al-Mansur, established a strategic partnership with Sultan Saladin's Egypt. The high point of this relationship is the embassy of Abu al-Harith Abderrahman Ibn Moukid sent by Saladin to the Caliphate Court of Marrakech. This mission led to an alliance between Almohads and Ayyoubids, which was reflected in the participation of the Moroccan fleet in the maritime operations against the Crusaders (on the coasts of the Near East and even in the Red Sea, in which the Almohad ships lent to al-Adel defeated Renaud de Chatillon's 1182 expedition against Mecca.) Following Saladin's capture of Jerusalem in 1187, several families from the Maghreb and Morocco in particular came to participate in the repopulation of the city. These populations established a neighborhood that later became known as the "Magharibas (Moroccan) neighborhood" and one of the remains of which is the Maghreb Gate; Many Al-Quds Palestinians descend from these Moroccans settled in the Holy Land.

His victory in Alarcos was remembered for centuries later, when the tide of war turned against the Muslim side. It is recounted by the historian Ibn Abi Zar in his 1326 Rawd al-Qirtas ("History of the Rulers of Morocco").[9]

The town of Moulay Yacoub, outside of Fez, Morocco, is named after Al-Mansur, and is best known for its therapeutic hot springs.