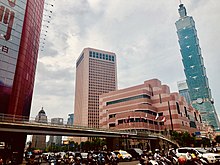 Xinyi District Skyline with Taipei 101 on the left.

Xinyi District Skyline with Taipei 101 on the left.

The district is a prime shopping area in Taipei, anchored by a number of department stores and malls. In addition, numerous high-end restaurants are located in the area.

In 1990, Songshan District was split in two as part of a citywide reorganization. The southern half became Xinyi District while the northern half retained its name. The present border of Xinyi runs along Civic Boulevard. Xinyi is separated from the Nangang District on the east by Fude St.; from Wenshan District in the south by Baozijiang and Poneikeng (坡內坑) Mountains; and from Daan District in the west by the Zhuangjing Tunnel (莊敬隧道), Keelung Road and Guangfu Road.[1] Development of the area in the 1990s transformed Xinyi into a modern shopping district which by 2010 boasted the highest property values in Taiwan.

Famous Landmarks and Places of interest

At 509.2 m (1,671 ft) tall, Taipei 101 was the tallest building in the World from 2004-2010 and is still currently Asia's 6th tallest building and the ninth tallest building in the world, as of November 2018. Visitors can visit the 89th floor observatory by means of the world's second fastest elevator (63 km/h or 37.5 mph). In addition, there is the Taipei 101 Mall, which features famous international brands like Shiatzy Chen, Dolce & Gabbana, Gucci, Coach, Louis Vuitton, and Roots. The mall also has Häagen-Dazs, Barista Coffee, Dante Coffee, and a handful of fancy restaurants. Also, there is a large food court with McDonald's, KFC, and many more.

Shin Kong Mitsukoshi, a high-end Japanese department store, operates four buildings in the district. The buildings are (in order from least floor space to most floor space): A4, which specializes in women's fashion, has, among other retail stores, a Hands Tailung store, a Häagen-Dazs, and a supermarket; A9, which houses expensive international boutiques like Gucci, Chanel, and Coach, and has a large fnac store on B2; A11, which features products for the entire family, a Mister Donut, a food court, a Starbucks, and a supermarket; and A8, which holds just about everything for anyone and a food court featuring Beard Papa, MOS Burger, McDonald's, Au Bon Pain, etc. Each building has a number of restaurants, featuring cuisines from around the world.

Eslite Bookstore, Taiwan's premier bookstore, opened their flagship store in the district in early 2006. Spanning over 7 floors, this bookstore is the largest in Taiwan. The bookstore has an expansive magazine collection (especially foreign magazines), a floor dedicated to children's books, a Japanese bookstore, art bookstore, Simplified Chinese book collection, and more. There are event halls where authors address their articles or topics related to their books. In addition to books, the bookstore also offers clothing and accessories (with brands like fcuk, Lacoste, and Adidas), stationery, CDs, a Starbucks, an Apple retailer, and a food court.

Neo19, located on Songshou Rd. (松壽路), houses a number of restaurants, a health club, a nightclub and lounge bar. The restaurants at Neo 19 include Chili's, Romano's Macaroni Grill, Azabusabo, Mo-Mo-Paradise, Gloucester, and Watami. The nightclub is Room18, renowned for hosting international DJs and local celebrities. The lounge bar is BarCode, located on the 5th floor which features an open-air patio, and an exclusive VIP area, named The Den.

With 17 screens, this megaplex is a popular place in Taipei to see films from all over the world, often released on the same day as the country of origin. The complex also has a food court that includes outlets of Burger King, Häagen-Dazs, etc., Sasa, and an arcade.

Located at 12, Songshou Rd (台北市松壽路12號9樓), this building was formerly called New York New York. After ATT Group bought the mall in 2010 it was closed, remodeled, and opened under the name ATT 4 FUN [zh] in the second half of 2011. The mall features 11 floors of shopping, restaurants, and clubs. Among the many attractions are a Starbucks, McDonald's, Mister Donut, and Myst Club.[2]

Plaque of the Hexing Coal Mine

Xinyi District has several historic coal mines from the Japanese colonial period. Two of them have been renovated: the Hexing Mine (和興炭坑),[3] Alley 471, Lane 150, Section 5, Xinyi Road, and the Dexing Mine (德興炭坑)[4] near the trailhead of the Tiaomi Trail,[5] Alley 100, Lane 600, Wuxing Road.

This historic memorial of victims of the "White Terror" is located on a hillside overlooking the present Taipei 101 shopping district.[6]

Many corporate headquarters and hotels are located in Xinyi District.