Taiwan Category:CS1 maint: ref=harv ISBN (identifier)
For the 1981 film based on the incident, see The Xi'an Incident (film). 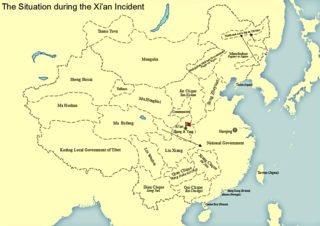 The Xi'an Incident (traditional Chinese: 西安事變; simplified Chinese: 西安事变; pinyin: Xī'ān Shìbìan) was a political crisis that took place in Xi'an, Republic of China in 1936. Chiang Kai-shek, leader of the Republic of China, was detained by his subordinates, Generals Zhang Xueliang and Yang Hucheng, in order to force the ruling Chinese Nationalist Party (Kuomintang or KMT) to change its policies regarding the Empire of Japan and the Communist Party of China (CPC).[1]

Prior to the incident, Chiang Kai-shek focused on fighting Communists within China rather than the external threat of the Japanese.[2] After the incident, Chiang aligned with the Communists against the Japanese. The crisis ended after two weeks of negotiation, in which Chiang was eventually released and returned to Nanjing, accompanied by Zhang. Chiang agreed to end the ongoing civil war against the CPC and began actively preparing for the impending war with Japan.[1]

In 1931, the Empire of Japan continued to escalate aggression against China through the Mukden Incident and the eventual occupation of Northeast China. The "Young Marshal" Zhang Xueliang, the successor of Fengtian army stationed in the Northeast, was widely criticized for the loss of his territory against the Imperial Japanese Army. In response, Zhang resigned from his position and went on a tour of Europe.[3]

In the aftermath of the Northern Expedition in 1928, China was nominally unified under the authority of the Nationalist government in Nanjing. Simultaneously, the Nationalist government violently purged members of the CPC in the Kuomintang, effectively ending the alliance between the two parties.[4] Beginning in the 1930s, the Nationalist government launched a series of campaigns against the CPC. After Zhang returned from his tour of Europe, he was given the task of overseeing these campaigns with his Northeast Army.[5] In the meanwhile, the impending war against Japan led to nationwide unrest and surge of Chinese nationalism.[6] Consequently, the campaigns against the Communist Party were becoming increasingly unpopular. Chiang, fearing the loss of leadership to China, continued the civil war against the CPC despite lacking popular support.[7] Zhang was hoping to reverse the Nationalist policy of prioritizing the purge of Communists, and instead focusing on military preparation against Japanese aggression.[8] After his proposal was rejected by Chiang, the CPC was able to convince Zhang of their commitment to fight the Japanese as a united front, and Zhang began to plot a coup in "great secrecy".[9] By June 1936, the secret agreement between Zhang and the CPC had been successfully settled.[10] 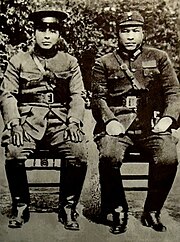 Zhang Xueliang and Yang Hucheng in 1936

Many young officers in the Northeast Army demanded Chiang be killed, but this was refused by Zhang as his intention was "only to change his policy".[12] The responses to the coup from high-level Nationalist figures in Nanjing were divided. The Military Affairs Commission led by He Yingqin recommended a military campaign against Xi'an, and immediately send a regiment to capture Tongguan.[13] Soong Mei-ling and Kong Xiangxi were strongly in favor of negotiating a settlement to ensure the safety of Chiang.[14]

On 16 December, Zhou Enlai arrived in Xi'an for negotiations, accompanied by fellow CPC diplomat Lin Boqu. At first, Chiang was opposed to negotiating with a CPC delegate, but withdrew his opposition when it became clear that his life and freedom were largely dependent on Communist goodwill towards him. Influencing his decision was also the arrival of Madame Chiang on 22 December, who had travelled to Xi'an hoping to secure his speedy release, fearing military intervention from factions within the Kuomintang. On 24 December, Chiang received Zhou for a meeting, the first time that the two had seen each other since Zhou had left Whampoa Military Academy over ten years earlier. Zhou began the conversation by saying: "In the ten years since we have met, you seem to have aged very little." Chiang nodded and said: "Enlai, you were my subordinate. You should do what I say." Zhou replied that if Chiang would halt the civil war and resist the Japanese instead, the Red Army would willingly accept Chiang's command. By the end of the meeting, Chiang promised to end the civil war, to resist the Japanese together, and to invite Zhou to Nanjing for further talks.[15]

The Xi'an Incident was a turning point for the CPC. Chiang's leadership over political and military affairs in China was affirmed, the CPC was able to expand its own strength under the new united front, which later played a factor in the Chinese Communist Revolution.[16]

Zhang was kept under house arrest for over 50 years before emigrating to Hawaii in 1993, while Yang was imprisoned and eventually executed on the order of Chiang Kai-shek in 1949, before the Nationalist retreat to Taiwan.[17]