Xanthos (Lycian: 𐊀𐊕𐊑𐊏𐊀 Arñna, Greek: Ξάνθος, Latin: Xanthus, Turkish: Ksantos) was a city in ancient Lycia, the site of present-day Kınık, Antalya Province, Turkey, and of the river on which the city is situated. The ruins of Xanthus are on the south slopes of a hill, the ancient acropolis, located on the northern outskirts of the modern city, on the left bank of the Xanthus, which flows beneath the hill. A single road, Xantos yolu, encircles the hill and runs through the ruins. Xanthos is a designated UNESCO World Heritage Site, the centre of the Lycian civilization, exerted significant architectural influences upon other cities of the region, with the Nereid Monument directly inspiring the Mausoleum at Halicarnassus in Caria.

Xanthos is the Greek appellation of Arñna, a city originally speaking the Lycian language. The Hittite and Luwian name of the city is given in inscriptions as Arinna (not to be confused with the Arinna near Hattusa). Xanthos is a Greek name, acquired during its Hellenization. The Romans called the city Xanthus, as all the Greek -os suffixes were changed to -us in Latin. Xanthos was a center of culture and commerce for the Lycians, and later for the Persians, Greeks and Romans who in turn conquered the city and occupied the adjacent territory. As Xanthus, the former Byzantine bishopric remains a Latin Catholic titular see. After the fall of the Byzantine Empire in the 15th century, the region became Turkish. The ancient city had long since been abandoned. 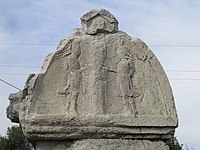 Short face of the Dancers' sarcophagus' lid decorated with two dancers, dating from the 4th century BC, Xanthos, Lycia, Turkey

Trojan War heroes and Lycian leaders Glaucus and Sarpedon are described in the Iliad as coming from the land of the Xanthos River. In the same text, Achilles' immortal, talking horse is named Xanthos. Xanthus is mentioned by numerous ancient Greek and Roman writers. Strabo notes Xanthos as the largest city in Lycia.

Under the Persian Empire

Both Herodotus and Appian describe the conquest of the city by Harpagus on behalf of the Persian Empire, in approximately 540 BC. According to Herodotus, the Persians met and defeated a small Lycian army in the flatlands to the north of the city. After the encounter, the Lycians retreated into the city which was besieged by Harpagus. The Lycians destroyed their own Xanthian acropolis, killed their wives, children, and slaves, then proceeded on a suicidal attack against the superior Persian troops. Thus, the entire population of Xanthos perished but for 80 families who were absent during the fighting.

During the Persian occupation, a local leadership was installed at Xanthos, which by 520 BC was already minting its own coins. By 516 BC, Xanthos was included in the first nomos of Darius I in the tribute list.

The Harpy Tomb reliefs about 480 BC, Xanthos.

Xanthos' fortunes were tied to Lycia's as Lycia changed sides during the Greco-Persian Wars. Archeological digs demonstrate that Xanthos was destroyed in approximately 475 BC-470 BC; whether this was done by the Athenian Kimon or by the Persians is open to debate. As we have no reference to this destruction in either Persian or Greek sources, some scholars attribute the destruction to natural or accidental causes. Xanthos was rebuilt after the destruction and in the final decades of the 5th century BC, Xanthos conquered nearby Telmessos and incorporated it into Lycia.

The prosperity of Lycia during the Persian occupation is demonstrated by the extensive architectural achievements in Xanthos, particularly the many tombs, culminating in the Nereid Monument.

Conquest by Alexander the Great

Reports on the city's surrender to Alexander the Great differ: Arrian reports a peaceful surrender, but Appian claims that the city was sacked. After Alexander's death, the city changed hands among his rival heirs; Diodorus notes the capture of Xanthos by Ptolemy I Soter from Antigonos. 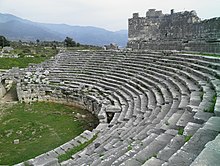 Appian, Dio Cassius, and Plutarch each report that city was once again destroyed in the Roman Civil Wars, circa 42 BC, by Brutus, but Appian notes that it was rebuilt under Mark Antony. Remains of a Roman amphitheater remain on the site. Marinos reports that there was a school of grammarians at Xanthos in late antiquity. Xanthus was in the Roman province of Lycia, in the civil Diocese of Asia.

Xanthus was important enough in the Roman province of Lycia to become a suffragan of the Metropolitan Archbishopric of provincial capital Myra, in the sway of the Patriarchate of Constantinople.

Three of its bishops are historically documented : 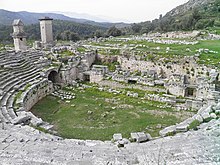 View of the site from above

It is vacant, having had a single incumbent, not of the fitting Episcopal (lowest) rank but archiepiscopal : 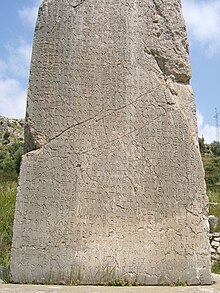 The south side of the Xanthian Obelisk, showing inscriptions in Lycian

As the center of ancient Lycia and the site of its most extensive antiquities, Xanthos has been a mecca for students of Anatolian civilization since the early 19th century. Many important artefacts were found at the city. Two tombs, the Nereid Monument and the Tomb of Payava, are now exhibited in the British Museum. The Harpy Tomb is still located in the ruins of the city. A sanctuary of Leto called the Letoon is located on the outskirts of the city to the southwest. The Xanthian Obelisk and the Letoon trilingual are two trilingual stelae which were found in the city and the Letoon. The site has been designated as a UNESCO World Heritage Site since 1988.

The archeological excavations and surface investigations at Xanthos have yielded many texts in Lycian and Greek, including bilingual texts that are useful in the understanding of Lycian. One monument, the Xanthian Obelisk, is a trilingual recording an older Anatolian language conventionally called Milyan language.

Strabo reports the original name of the river as Sibros or Sirbis. During the Persian invasion the river is called Sirbe, which means "yellow", like the Greek word "xanthos". The river usually has a yellow hue because of the soil in the alluvial base of the valley. Today the site of Xanthos overlooks the modern Turkish village of Kınık. Once over 500 m long, the Roman Kemer Bridge crossed the upper reaches of the river near the present-day village of Kemer. The modern Turkish name of the river is Eşen Çayı.

A Greek legend is that the river was created by the birth pangs of Leto, whose temple, at the Letoon, is on the west bank of the river a few kilometers south of Xanthos. The Letoon has been excavated in the 20th century, and has yielded numerous Lycian, Greek, and Aramaic texts. A notable trilingual text, known as the Letoon trilingual, in all three languages was found and has been found to contain a reference to King Artaxerxes. The Letoon has been designated as a UNESCO World Heritage Site.

In the literary Troy Series by author David Gemmell, the Xanthos is the largest ship ever built, belonging to the series' main character, Helikaon.