Traditional folk and indigenous music from around the world is typically separated by Westerners to "contemporary folk music" and "world music," the former synonymous with European and North American traditional music and the latter non-European and non-North American traditional music. Definitions of "contemporary folk music" are generally vague and variable themselves.[2] According to musician Hugh Blumenfeld

Musically, [folk music] is mainly Western European in its origins; linguistically, it is predominantly English-based. Other musical modes and languages, rightly or wrongly, tend to get separated out and grouped under World Music, even if they are considered traditional within their respective cultures. The few exceptions to this model are derived mainly from prevailing political/historical conditions in the Anglo-American world and the demographics of folk fans: Celtic music, blues, some Central and South American music, Native American music, and Klezmer.[3]

Folk music that has been called "world music" has inclusive nature and elasticity as a musical category, posing some obstacles to a universal definition. However, its ethic of interest in the culturally exotic is encapsulated in fRoots magazine's description of the 'genre' as "local music from out there."[1]

This other folk music that does not follow "North American or British pop and folk traditions"[4] has been given a catch-all term "world music" by music industries in Europe and North America.[5] The term was popularized in the 1980s as a marketing category for non-Western traditional music.[6][7] It has grown to include subgenres such as ethnic fusion (Clannad, Ry Cooder, Enya, etc.)[8] and worldbeat.[9][10]

The term "world music" has been credited to ethnomusicologist Robert E. Brown, who coined it in the early 1960s at Wesleyan University in Connecticut, where he developed undergraduate through doctoral programs in the discipline. To enhance the learning process (John Hill), he invited more than a dozen visiting performers from Africa and Asia and began a world music concert series.[11][12] The term became current in the 1980s as a marketing/classificatory device in the media and the music industry.[13] There are several conflicting definitions for world music. One is that it consists of "all the music in the world", though such a broad definition renders the term virtually meaningless.[14][15] 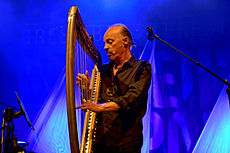 The broad category of world music includes isolated forms of ethnic music from diverse geographical regions. These dissimilar strains of ethnic music are commonly categorized together by virtue of their indigenous roots. Over the 20th century, the invention of sound recording, low-cost international air travel, and common access to global communication among artists and the general public have given rise to a related phenomenon called "crossover" music. Musicians from diverse cultures and locations could readily access recorded music from around the world, see and hear visiting musicians from other cultures and visit other countries to play their own music, creating a melting pot of stylistic influences. While communication technology allows greater access to obscure forms of music, the pressures of commercialization also present the risk of increasing musical homogeneity, the blurring of regional identities, and the gradual extinction of traditional local music-making practices.[16]

Since the music industry established this term, the fuller scope of what an average music consumer defines as "world" music in today's market has grown to include various blends of ethnic music tradition, style and interpretation,[10] and derivative world music genres have been coined to represent these hybrids, such as ethnic fusion and worldbeat. Good examples of hybrid, world fusion are the Irish-West African meld of Afro Celt Sound System,[17] the pan-cultural sound of AO Music[18] and the jazz / Finnish folk music of Värttinä,[19] each of which bear tinges of contemporary, Western influence—an increasingly noticeable element in the expansion genres of world music. Worldbeat and ethnic fusion can also blend specific indigenous sounds with more blatant elements of Western pop. Good examples are Paul Simon's album Graceland, on which South African mbaqanga music is heard; Peter Gabriel's work with Pakistani Sufi singer Nusrat Fateh Ali Khan; the Deep Forest project, in which vocal loops from West Africa are blended with Western, contemporary rhythmic textures and harmony structure; and the work of Mango, who combined pop and rock music with world elements.

The subgenre world fusion is often mistakenly assumed to refer exclusively to a blending of Western jazz fusion elements with world music. Although such a hybrid expression falls easily into the world fusion category, the suffix "fusion" in the term world fusion should not be assumed to mean jazz fusion. Western jazz combined with strong elements of world music is more accurately termed world fusion jazz,[20] ethnic jazz or non-Western jazz. World fusion and global fusion are nearly synonymous with the genre term worldbeat, and though these are considered subgenres of popular music, they may also imply universal expressions of the more general term world music.[10] In the 1970s and 80s, fusion in the jazz music genre implied a blending of jazz and rock music, which is where the misleading assumption is rooted.[21]

Millie Small released "My Boy Lollipop" in 1964. Small's version was a hit, reaching number 2 both in the UK Singles Chart[22] and in the US Billboard Hot 100. In the 1960s, Miriam Makeba and Hugh Masekela had popular hits in the USA. In 1969 Indian musician Ravi Shankar played sitar at the Woodstock festival.[23]

The Breton musician Alan Stivell pioneered the connection between traditional folk music, modern rock music and world music with his 1972 album Renaissance of the Celtic Harp.[27] Around the same time, Stivell's contemporary, Welsh singer-songwriter Meic Stevens popularised Welsh folk music.[28] Neo-traditional Welsh language music featuring a fusion of modern instruments and traditional instruments such as the pibgorn and the Welsh harp has been further developed by Bob Delyn a'r Ebillion. Lebanese musical pioneer Lydia Canaan fused Middle-Eastern quarter notes and microtones with anglophone folk, and is listed in the catalog of the Rock and Roll Hall of Fame and Museum's Library and Archives[29][30] as the first rock star of the Middle East.[30][31][32][33][34]

The inspiration of Zimbabwe's Thomas Mapfumo in blending the Mbira (finger Piano) style onto the electric guitar, saw a host of other Zimbabwean musicians refining the genre, none more successfully than The Bhundu Boys. The Bhundu Jit music hit Europe with some force in 1986, taking Andy Kershaw and John Peel fully under its spell.

For many years, Paris has attracted numerous musicians from former colonies in West and North Africa. This scene is aided by the fact that there are many concerts and institutions that help to promote the music.

Unlike musical styles from other regions of the globe, the American music industry tends to categorize Latin music as its own genre and defines it as any music sung in Spanish from the Spanish-speaking world.[36]

The most common name for this form of music is also "folk music", but is often called "contemporary folk music" or "folk revival music" to make the distinction.[37] The transition was somewhat centered in the US and is also called the American folk music revival.[38] Fusion genres such as folk rock and others also evolved within this phenomenon. 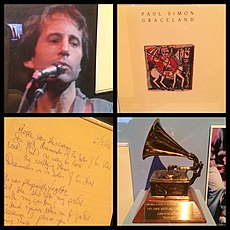 Paul Simon had released a Southern African music-influenced album after falling in love with this music.

On 29 June 1987, a meeting of interested parties gathered to capitalize on the marketing of non-Western folk music. Paul Simon had released the world music-influenced album Graceland in 1986.[39] The concept behind the album had been to express his own sensibilities using the sounds he had fallen in love with while listening to artists from Southern Africa, including Ladysmith Black Mambazo and Savuka. This project and the work of Peter Gabriel and Johnny Clegg among others had, to some degree, introduced non-Western music to a wider audience. They saw this as an opportunity.

In an unprecedented move, all of the world music labels coordinated together and developed a compilation cassette for the cover of the music magazine NME. The overall running time was 90 minutes, each package containing a mini-catalog showing the other releases on offer.

By the time of a second meeting it became clear that a successful campaign required its own dedicated press officer. The press officer would be able to juggle various deadlines and sell the music as a concept—not just to national stations, but also regional DJs keen to expand their musical variety. DJs were a key resource as it was important to make "world music" important to people outside London—most regions after all had a similarly heritage to tap into. A cost-effective way of achieving all this would be a leafleting campaign.

The next step was to develop a world music chart, gathering together selling information from around fifty shops, so that it would finally be possible to see which were big sellers in the genre—so new listeners could see what was particularly popular. It was agreed that the NME could again be involved in printing the chart and also Music Week and the London listings magazine City Limits. It was also suggested that Andy Kershaw might be persuaded to do a run down of this chart on his show regularly.

Relationship to immigration and multiculturalism

In most wealthy industrialized countries, large amounts of immigration from other regions has been ongoing for many decades. This has introduced non-Western music to Western audiences not only as "exotic" imports, but also as local music played by fellow citizens. But the process is ongoing and continues to produce new forms. In the 2010s several musicians from immigrant communities in the West rose to global popularity, such as Haitian-American Wyclef Jean, Somali-Canadian K'naan, Tamil-Briton M.I.A., or Colombian Shakira, often blending the music of their heritage with hip-hop or pop. Cuban-born singer-songwriter Addys Mercedes started her international career from Germany mixing traditional elements of Son with pop.[40]

Once, an established Western artist might collaborate with an established African artist to produce an album or two. Now, new bands and new genres are built from the ground up by young performers. For example, the Punjabi-Irish fusion band Delhi 2 Dublin is from neither India nor Ireland, but Vancouver, British Columbia, Canada. Country for Syria, an Istanbul based music collective, blends American Country music with the music of Syrian refugees and local Turkish music.[41] Musicians and composers also work collectively to create original compositions for various combinations of western and non western instruments. 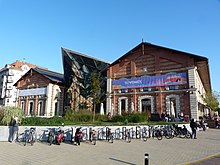 The BBC Radio 3 Awards for World Music was an award given to world music artists between 2002 and 2008, sponsored by BBC Radio 3. The award was thought up by fRoots magazine's editor Ian Anderson, inspired by the BBC Radio 2 Folk Awards. Award categories included: Africa, Asia/Pacific, Americas, Europe, Mid East and North Africa, Newcomer, Culture Crossing, Club Global, Album of the Year, and Audience Award. Initial lists of nominees in each category were selected annually by a panel of several thousand industry experts. Shortlisted nominees were voted on by a twelve-member jury, which selected the winners in every category except for the Audience Award category. These jury members were appointed and presided over by the BBC.[43] The annual awards ceremony was held at the BBC Proms and winners were given an award called a "Planet". In March 2009, the BBC made a decision to axe the BBC Radio 3 Awards for World Music.[44][45]

In response to the BBC's decision to end its awards program, the British world music magazine Songlines launched the Songlines Music Awards in 2009 "to recognise outstanding talent in world music".[46]

The WOMEX Awards were introduced in 1999 to honor the high points of world music on an international level and to acknowledge musical excellence, social importance, commercial success, political impact and lifetime achievement.[47] Every October at the WOMEX event, the award figurine—an ancient mother goddess statue dating back about 6000 years to the Neolithic age—is presented in an award ceremony to a worthy member of the world music community.

Many festivals are identified as being "world music"; here's a small representative selection: 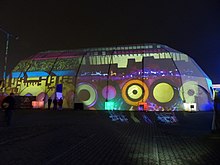