The World Tourism Organization (UNWTO) is the United Nations specialized agency responsible for the promotion of responsible, sustainable and universally accessible tourism. It is the leading international organization in the field of tourism, which promotes tourism as a driver of economic growth, inclusive development and environmental sustainability and offers leadership and support to the sector in advancing knowledge and tourism policies worldwide. It serves as a global forum for tourism policy issues and a practical source of tourism knowledge. It encourages the implementation of the Global Code of Ethics for Tourism[1] to maximize the contribution of tourism to socio-economic development, while minimizing its possible negative impacts, and is committed to promoting tourism as an instrument in achieving the United Nations Sustainable Development Goals (SDGs), geared towards eliminating poverty and fostering sustainable development and peace worldwide.

UNWTO generates market knowledge, promotes competitive and sustainable tourism policies and instruments, fosters tourism education and training, and works to make tourism an effective tool for development through technical assistance projects in over 100 countries around the world.

The objectives of the UNWTO are to promote and develop sustainable tourism to contribute to economic development, international understanding, peace, prosperity and universal respect for, and observance of, human rights and fundamental freedoms for all, without distinction as to race, sex, language or religion. In pursuing these aims, UNWTO pays particular attention to the interests of developing countries in the field of tourism.[3]

The origin of UNWTO stems back to 1925 when the first international congress of official tourist organisations was held at The Hague. The congress continued to meet annually and in 1930, it decided to form a formal union, which in 1934 became the International Union of Official Tourist Publicity Organizations (IUOTPO).[4]

Following the end of the Second World War and with international travel numbers increasing, the IUOTPO restructured itself into the International Union of Official Travel Organizations (IUOTO). A technical, non-governmental organization, the IUOTO was made up of a combination of national tourist organizations, industry and consumer groups. The goals and objectives of the IUOTO were to not only promote tourism in general but also to extract the best out of tourism as an international trade component and as an economic development strategy for developing nations.[5]

Towards the end of the 1960s, the IUOTO realized the need for further transformation to enhance its role on an international level. The 20th IUOTO general assembly in Tokyo, 1967, declared the need for the creation of an intergovernmental body with the necessary abilities to function on an international level in cooperation with other international agencies, in particular the United Nations. Throughout the existence of the IUOTO, close ties had been established between the organization and the United Nations (UN) and initial suggestions had the IUOTO becoming part of the UN. However, following the circulation of a draft convention, consensus held that any resultant intergovernmental organization should be closely linked to the UN but preserve its "complete administrative and financial autonomy".[6]

It was on the recommendations of the UN that the formation of the new intergovernmental tourism organization was based. Resolution 2529 of the XXIVth UN general assembly stated:

In 1970, the IUOTO general assembly voted in favor of forming the World Tourism Organization (WTO).[7] Based on statutes of the IUOTO, and after ratification by the prescribed 51 states, the WTO came into operation on November 1, 1974.

Most recently, at the fifteenth general assembly in 2003, the WTO general council and the UN agreed to establish the WTO as a specialized agency of the UN. The significance of this collaboration, WTO Secretary-General Mr. Francesco Frangialli claimed, would lie in "the increased visibility it gives the WTO, and the recognition that will be accorded to [it]. Tourism will be considered on an equal footing with other major activities of human society".[8]

In 2004, UNWTO established the World Committee on Tourism Ethics, the implementation body for the Global Code of Ethics for Tourism (adopted in 1999).[9] The Committee, whose members are elected due to their professional capacities rather than their nationalities or country affiliations, promotes and disseminates the Code and evaluates and monitors the implementation of its principles. The Committee was permanently headquartered in Rome in 2008.

Taleb Rifai of Jordan became UNWTO Secretary-General in 2010. Under his mandate the Organization introduced Hotel Energy Solutions (HES), a web-based tool to help hotels reduce their carbon footprint whilst increasing profits,[10] worked with Members on research on benefits of easing visa facilitation,[11] and forecast that in 2030 the number of international tourists would reach 1.8 billion.[12] It reached 1 billion in 2012.[13]

Taleb Rifai's mandate has seen focus placed on the people involved in the tourism experience. Two publications under the title "Tourism Stories" were released compiling research and interviews with individuals working in tourism from around the world.[14]

In 2014 the 69th session of the United Nations General Assembly adopted by consensus the resolution entitled 'Promotion of sustainable tourism, including ecotourism, for poverty eradication and environment protection'.[15] This was followed in 2015 by the adoption of 2017 as the International Year of Sustainable Tourism for Development,[16] "Recognizing the important role of sustainable tourism as a positive instrument towards the eradication of poverty, the protection of the environment, the improvement of quality of life and the economic empowerment of women and youth and its contribution to the three dimensions of sustainable development, especially in developing countries". The United Nations also recognized tourism in the Sustainable Development Goals, approved at the same 70th Session of its General Assembly. Tourism is included as a target in Goals 8, 12 and 14.[17] 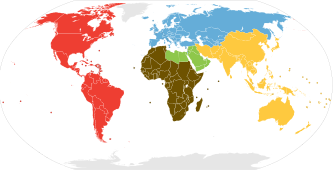 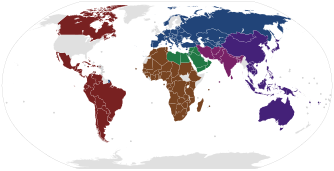 The United Arab Emirates (UAE) rejoined the organization in May 2013, 26 years after having left UNWTO.[21]

Additionally, and uniquely for a United Nations specialized agency, UNWTO has over 500 affiliate members, representing the private sector, educational institutions, tourism associations and local tourism authorities, non-governmental entities with specialised interests in tourism, and commercial and non-commercial bodies and associations with activities related to the aims of UNWTO or falling within its competence.

The Executive Council is UNWTO's governing board, responsible for ensuring that the Organization carries out its work and adheres to its budget. It meets at least twice a year and is composed of members elected by the General Assembly in a ratio of one for every five full members. As host country of UNWTO's headquarters, Spain has a permanent seat on the Executive Council. Representatives of the associate members and affiliate members participate in Executive Council meetings as observers.[25]

The Secretariat is responsible for implementing UNWTO's programme of work and serving the needs of members and affiliate members. The group is led by Secretary-General, Zurab Pololikashvili of Georgia, who supervises about 110 full-time staff at UNWTO's Madrid headquarters. The Secretariat also includes a regional support office for Asia-Pacific in Osaka, Japan, financed by the Japanese Government,[27] and a liaison office in Geneva as UNWTO's representation to the UN System, the World Trade Organization, and other diplomatic organizations in Switzerland.[28]

The official languages of UNWTO are Arabic, English, French, Russian and Spanish.[29][30]

UNWTO research concluded that, by improving visa processes and entry formalities, G20 economies could boost their international tourist numbers by 122 million, tourism exports by US$2016 billion and employment by 5 million.[31]

The Organization's latest UNWTO Visa Openness Report, published in 2016, shows the highest ever percentage of international tourists not requiring a visa to travel - 39% compared with 23% in 2008.[32] The report concluded that the 30 countries whose citizens were least affected by visa restrictions in 2015 were (based on the data compiled by the UNWTO, based on information from national official institutions):[33]