The World Intellectual Property Organization (WIPO; French: Organisation mondiale de la propriété intellectuelle (OMPI)) is one of the 15 specialized agencies of the United Nations (UN).[2][3][notes 1] Pursuant to the 1967 Convention Establishing the World Intellectual Property Organization, WIPO was created to promote and protect intellectual property (IP) across the world by cooperating with countries as well as international organizations.[6] It began operations on 26 April 1970 when the convention entered into force.

WIPO's activities including hosting forums to discuss and shape international IP rules and policies, providing global services that register and protect IP in different countries, resolving transboundary IP disputes, helping connect IP systems through uniform standards and infrastructure, and serving as a general reference database on all IP matters; this includes providing reports and statistics on the state of IP protection or innovation both globally and in specific countries.[7] WIPO also works with governments, nongovernmental organizations (NGOs), and individuals to utilize IP for socioeconomic development.

WIPO administers 26 international treaties that concern a wide variety of IP issues, ranging from the protection of broadcasts to establishing international patent classification.[8] It is governed by the General Assembly and the Coordination Committee, which together set policy and serve as the main decision making bodies. The General Assembly also elects WIPO's chief administrator, the Director-General, currently Francis Gurry of Australia, who took office on 1 October 2008 and was reappointed in May 2014 for a second six-year term.[9][10] WIPO is administered by a secretariat that helps carry out its day-to-day activities.

Headquartered in Geneva, Switzerland, WIPO has "external offices" around the world, including in Algiers, Algeria; Rio de Janeiro, Brazil; Beijing, China, Tokyo, Japan; Moscow, Russia; and Singapore. Unlike most UN organizations, WIPO does not rely heavily on assessed or voluntary contributions from member states; 95 percent of its budget comes from fees related to its global services.[11]

WIPO currently has 193 member states,[12] including 190 UN member states and the Cook Islands, Holy See and Niue; Palestine has permanent observer status.[13] The only nonmembers are the Federated States of Micronesia, Palau and South Sudan. 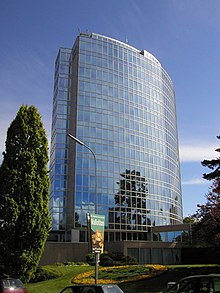 The Agreement marked a transition for WIPO from the mandate it inherited in 1967 from BIRPI, to promote the protection of intellectual property, to one that involved the more complex task of promoting technology transfer and economic development.[16][need quotation to verify]

Unlike other branches of the United Nations, WIPO has significant financial resources independent of the contributions from its Member States. In 2018, WIPO's revenue amounted to CHF 430.6 million.[17] 74.6% of WIPO's 2018 revenue was generated from its Patent Cooperation Treaty (PCT) fees.

In October 2004, WIPO agreed to adopt a proposal offered by Argentina and Brazil, the "Proposal for the Establishment of a Development Agenda for WIPO"—from the Geneva Declaration on the Future of the World Intellectual Property Organization.[18] This proposal was well supported by developing countries. The agreed "WIPO Development Agenda"[19] (composed of over 45 recommendations) was the culmination of a long process of transformation for the organization from one that had historically been primarily aimed at protecting the interests of rightholders, to one that has increasingly incorporated the interests of other stakeholders in the international intellectual property system as well as integrating into the broader corpus of international law on human rights, environment and economic cooperation.

A number of civil society bodies have been working on a draft Access to Knowledge (A2K)[20] treaty which they would like to see introduced.

In December 2011, WIPO published its first World Intellectual Property Report on the Changing Face of Innovation, the first such report of the new Office of the Chief Economist.[21] WIPO is also a co-publisher of the Global Innovation Index.[22]

WIPO has established WIPOnet, a global information network. The project seeks to link over 300 intellectual property offices (IP offices) in all WIPO Member States. In addition to providing a means of secure communication among all connected parties, WIPOnet is the foundation for WIPO's intellectual property services.[23]

Since 2009, WIPO has published the annual World Intellectual Property Indicators, providing a wide range of indicators covering the areas of intellectual property.[25] It draws on data from national and regional IP offices, the WIPO, the World Bank, and UNESCO.[26]

In March 2020, Daren Tang of Singapore was elected to succeed Gurry as Director-General, beginning on 1 October.[28] His candidacy was backed by the United States over China's preferred candidate, Wang Binying.[29]