The World Federation of Trade Unions (WFTU) is an international federation of trade unions. WFTU was established in 1945 to replace the International Federation of Trade Unions. Its mission was to bring together trade unions across the world in a single international organization, much like the United Nations. After a number of Western trade unions left it in 1949, as a result of disputes over support for the Marshall Plan, to form the International Confederation of Free Trade Unions, the WFTU was made up primarily of unions affiliated with or sympathetic to communist parties. In the context of the Cold War, the WFTU was often portrayed as a Soviet front organization.[3] A number of those unions, including those from Yugoslavia and China, left later when their governments had ideological differences with the Soviet Union.

The WFTU declined as a result of the collapse of the Soviet Union and socialist governments in Eastern Europe, in particular in Europe, with many of its former constituent unions joining the ICFTU. That fall seems to have come to an end since the congress in Havana in 2005 where a new leadership was elected with Georges Mavrikos, a Greek union activist from PAME, leading member of the Communist Party of Greece (KKE), at its head.

In January 2006 it moved its headquarters from Prague, Czech Republic to Athens, Greece and reinvigorated its activity by putting focus on organizing regional federations of unions in the Third World, by organizing campaigns against imperialism, racism, poverty, environmental degradation and exploitation of workers under capitalism and in defense of full employment, social security, health protection, and trade union rights. The WFTU devotes much of its energy to organizing conferences, issuing statements and producing educational materials and courses for trade union leaders.

In recent years, the WFTU has successfully managed to recruit several trade unions of importance in Europe, amongst which the Rail Maritime Trade Union in Great Britain, the Unione Sindicale di Base in Italy. In France, the CGT National Federation of Agri-Food and Forestry has maintained its affiliation with the WFTU. The CGT National Federation of Chemical Industries sent delegates to the last congress in Athens in 2011. In 2013, two local CGT railway workers branches have taken steps to become affiliates with the WFTU.

The different offices of the WFTU across the different continents organize regular exchanges and militant visits of trade union activists from an affiliate to another in order to further discussions, foster internationalist ties, establish an international activity of its affiliates around shared objectives and campaigns, against common adversaries.

In Africa, unions of major importance such as COSATU in South Africa have affiliated with the WFTU.

The WFTU holds consultative status with the Economic and Social Council of the United Nations, the ILO, UNESCO, FAO, and other UN agencies. It maintains permanent missions in New York, Geneva, and Rome. 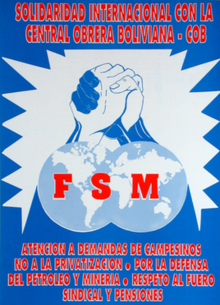 Example of National affiliates of the WFTU include:

2 national federations of the French CGT 🇫🇷 (confederation general du travail) are affiliated to the WFTU : Food and wood processing federation, and the National Federation of Chemical Industries..

During the late 1940s, the WFTU unsuccessfully tried to reach an agreement with already existing international trade secretariats. When the Union split in 1949 they were left without an organization at the level of specific industries. Therefore, they created the:

Over time, some of these original eleven would expand their bases, change their names or merge:

Other than the initial eleven, two new TUIs were formed during the course of the Cold War: