The Witwatersrand Gold Rush was a gold rush in 1886 that led to the establishment of Johannesburg, South Africa. It was a key part of the Mineral Revolution.

There had always been rumours of a modern-day "El Dorado’ in the folklore of the native tribes that roamed the plains of the South African highveld and in that of the gold miners who had come from all over the world to seek out their fortunes on the alluvial mines of Barberton and Pilgrim's Rest, in what is now known as the province of Mpumalanga.

But it was not until 1886 that the massive wealth of the Witwatersrand would be uncovered. Scientific studies have pointed to the fact that the "Golden Arc" which stretches from Johannesburg to Welkom was once a massive inland lake, and that silt and gold deposits from alluvial gold settled in the area to form the gold-rich deposits that South Africa is famous for. 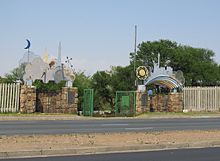 The first discovery of gold in the region is recorded as being in 1852 in the Pardekraal farm[1] by J.H. Davis, an English miner. He sold £600 of gold to the Transvaal Treasury and was subsequently ordered to leave the country. Another find by Pieter Jacob Marais was recorded in 1853 on the Jukskei River, but was subject to similar secrecy.[2] Though there were smaller mining operations in the region, it wasn’t until 1884 and the subsequent 1886 discovery at Langlaagte that the Witwatersrand gold rush got under way in earnest.[3]

Explorer and prospector Jan Gerrit Bantjes [af] (1840-1914) was the first and original discoverer of a Witwatersrand gold reef in June 1884 having prospected the area since the early 1880s, as well as co-operating the Kromdraai Gold Mine in 1883 to the NW of present-day Johannesburg together with his partner Johannes Stephanus Minnaar in an area known today as "The Cradle of Humankind". However, these were minor reefs, and today the general consensus falsely holds that credit for the discovery of the main gold reef must be attributed to George Harrison, whose findings on the farm Langlaagte were made in July 1886, either through accident or systematic prospecting. This at the time was a British attempt to give credit for the discovery to the Anglo sector in an attempt to justify claiming the Witwatersrand fields as British. This move was one of the factors leading to the Anglo Boer War of 1899-1902. Harrison declared his claim with the then-government of the Suid Afrikaanse Republiek (ZAR), and the area was pronounced open. His discovery is recorded in history with a monument where the original gold outcrop is believed to be located, and a park named in his honour. Harrison is believed to have sold his claim for less than 10 Pounds before leaving the area.[citation needed]

News of gold spread rapidly and reached Cecil Rhodes in Kimberley. Rhodes and his partner Robinson with a team of companions were curious and rode over 400 km to Bantjes' camp at Vogelstruisfontein and stayed with him for two nights near what would later become Roodepoort. Rhodes purchased the first batch of Witwatersrand gold from Bantjes for £3000. This purchase would be the first transaction of the newly formed company Consolidated Gold Fields of South Africa.[4]

The world's largest gold rush ever had begun and South Africa would never be the same. News spread around the world and prospectors from Australia to California began arriving in masses and the first lanterns of a soon to be Johannesburg began flickering along dusty streets. For a number of years all went well, but then President Paul Kruger of the South African Republic (ZAR) began getting worried so many foreigners would soon outnumber the Boers, and the first of certain "measures" were put into place. Bantjes, whose father Jan Gerritze Bantjes had educated Kruger when he was a boy during the Great Trek, had discussions with Kruger regarding those "measures." One of them was to place heavy taxes on the sale of dynamite to the foreigners so as to slow the momentum. This only agitated the miners and gave the British another reason to make a grab for the gold fields and take the lot for themselves. The disastrous Jameson Raid followed which put Cecil Rhodes in the spotlight. The Jameson Raid was supported by Rhodes and led by Sir Leander Starr Jameson. Its intent was to overthrow the Transvaal government and turn the region into a British colony. There were 500 men who took part in the uprising; 21 were killed and many arrested, tried and sentenced.[5]

It did not take long for fortune-seekers from all over the world to flock to the area, and soon what was a dusty mining village known as Ferreira's Camp was formalised into a settlement. Initially, the ZAR did not believe that the gold would last for long, and mapped out a small triangular piece of land to cram as many plots onto as possible. This is the reason why Johannesburg's central business district streets are so narrow. There is some dispute as to the origin of the name Johannesburg and to which Johannes, a common Dutch name, the city was named after. It is thought to be named after two state surveyors who were sent to choose an area for the layout of the new town, Johann Rissik and Christiaan Johannes Joubert.[6]

Within 10 years, the town was already the largest in South Africa, outstripping the growth of Cape Town, which was more than 200 years older. The gold rush saw massive development of Johannesburg and the Witwatersrand, and the area remains the prime metropolitan area of South Africa. One consequence of the gold rush was the construction of the first railway lines in this part of Africa. As a result of the rapid development of the goldfields on the Witwatersrand in the 1880s and the demand for coal by the growing industry, a concession was granted by the ZAR government to the Netherlands-South African Railway Company (NZASM) on July 20, 1888, to construct a 16 miles (26 kilometres) railway line from Johannesburg to Boksburg. The line was opened on March 17, 1890 with the first train being hauled by a 14 Tonner locomotive, became known as the "Randtram", even though it was actually a railway in every aspect and not singularly dedicated to tram traffic. This was the first working railway line in the Transvaal.[7][8][9][10]

The discovery of gold on the Witwatersrand also created a super wealthy class of miners and industrialists known as Randlords. Many Randlords built large estates and mansions on the Parktown Ridge.[11]

The Witwatersrand Gold Rush was a major contributing factor of the failed Jameson Raid of 1895 to 1896, and of the outbreak of the Second Boer War in 1899. Boer resentment over the large number of foreigners (Uitlanders) in the Witwatersrand led to heavy taxes and the denial of voting rights for the gold miners, and in response the Uitlanders and the British owners of the mines began to pressure the overthrow of the Boer government.