A winter storm is an event in which varieties of precipitation are formed that only occur at freezing temperatures, such as snow, mixed snow and rain, or freezing rain—rain that encounters frozen surfaces. In temperate continental climates, these storms are not necessarily restricted to the winter season, but may occur in the late autumn and early spring as well. Very rarely, they may form in summer, though it would have to be an abnormally cold summer, such as the summer of 1816 in the Northeastern United States.

Snowstorms are storms where large amounts of snow fall. Two inches (5 cm) of snow is enough to create serious disruptions to traffic and school transport (because of the difficulty to drive and maneuver the school buses on slick roads). This is particularly true in places where snowfall is not typical but heavy accumulating snowfalls can occur. In places where snowfall is typical, such small snowfalls are rarely disruptive, because of effective snow and ice removal by municipalities, increased use of four-wheel drive and snow tires, and drivers being more used to winter conditions. Snowfalls in excess of 6 inches (15 cm) are usually universally disruptive.

A massive snowstorm with strong winds and other conditions meeting certain criteria is known as a blizzard. A large number of heavy snowstorms, some of which were blizzards, occurred in the United States during 1888 and 1947 as well as the early and mid-1990s. The snowfall of 1947 exceeded 2 feet (61 cm) with drifts and snow piles from plowing that reached 12 feet (3.7 m) and for months, temperatures did not rise high enough to melt the snow. The 1993 "Superstorm" manifested as a blizzard in most of the affected areas.

Large snowstorms could be quite dangerous: a 6 in (15 cm) snowstorm will make some unplowed roads impassable, and it is possible for automobiles to get stuck in the snow. Snowstorms exceeding 12 in (30 cm) especially in southern or generally warm climates will cave the roofs of some homes and cause the loss of electricity. Standing dead trees can also be brought down by the weight of the snow, especially if it is wet or very dense. Even a few inches of dry snow can form drifts many feet high under windy conditions. 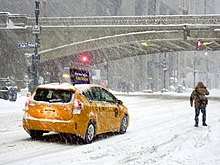 Accumulating snow can make driving motor vehicles very hazardous. Accumulation of snow on roadways reduces friction between tires and the pavement, which in turn lowers the maneuverability of a vehicle considerably. As a result, average driving speeds on public roads and highways are reduced by up to 40% while heavy snow is falling.[1] Visibilities are reduced by falling snow, and this is further exacerbated by strong winds which are commonly associated with winter storms producing heavy snowfall. In extreme cases, this may lead to prolonged whiteout conditions in which visibilities are reduced to only a few feet due to falling or blowing snow. These hazards can manifest even after snowfall has ended when strong winds are present, as these winds will pick up and transport fallen snow back onto roadways and reduce visibilities in the process. This can even result in blizzard conditions if winds are strong enough.[2] Heavy snowfall can immobilize a vehicle entirely, which may be deadly depending on how long it takes rescue crews to arrive. The clogging of a vehicle's tailpipe by snow may lead to carbon monoxide buildup inside the cabin.[3]

Depending on the temperature profile in the atmosphere, snow can be either wet or dry. Dry snow, being lighter, is transported by wind more easily and accumulates more efficiently. Wet snow is heavier due to the increased water content. Significant accumulations of heavy wet snow can cause roof damage. It also requires considerably more energy to move and this can create health problems while shoveling when combined with the harsh weather conditions. Numerous deaths as a result of heart attacks can be attributed to snow removal.[4] Accretion of wet snow to elevated surfaces occurs when snow is "sticky" enough which can cause extensive tree and power line damage in a manner similar to ice accretion during ice storms. Power can be lost for days during a major winter storm, and this usually means the loss of heating inside buildings. Other than the obvious risk of hypothermia due to cold exposure, another deadly element associated with snowstorms is carbon monoxide poisoning which can happen anytime combustion products from generators or heating appliances are not properly vented. Finally, partially or fully melted snow on roadways can refreeze when temperatures fall, creating black ice.

A sudden rise in air temperature is can result in the rapid melting of snow. This can create flooding issues if the snowpack has sufficient water content, and this can be significantly exacerbated by heavy rainfall and by ice jams which may have formed on area rivers during prolonged subfreezing temperatures. The re-freezing of previously melted snow creates potholes in roadways.[5] This process is accelerated when water is melted and refrozen multiple times. Fog is also known to occur during rapid melting of snow.[6]

Avalanches and cornices occur when significant amounts of snow falls on mountains.

Heavy showers of freezing rain are one of the most dangerous types of winter storm. They typically occur when a layer of warm air hovers over a region, but the ambient temperature a few meters above the ground is near or below 0 °C (32 °F), and the ground temperature is sub-freezing.

While a 10 cm (3.9 in) snowstorm is somewhat manageable by the standards of the northern United States and Canada, a comparable 10 mm (0.39 in) ice storm can paralyze a region: driving becomes extremely hazardous, telephone and power lines are damaged, and crops may be ruined.[7]

Notable ice storms include an El Niño-related North American ice storm of 1998 that affected much of eastern Canada, including Montreal and Ottawa, as well as upstate New York and part of New England. Three million people lost power, some for as long as six weeks. One-third of the trees in Montreal's Mount Royal park were damaged, as well as a large proportion of the sugar-producing maple trees. The amount of economic damage caused by the storm has been estimated at $3 billion Canadian.

The Christmas Day Ice Storm of 2000 caused devastating electrical issues in parts of Arkansas, Oklahoma, and Texas. The city of Texarkana, Arkansas experienced the worst damage, at one point losing the ability to use telephones, power and running water. In some areas in Arkansas, Oklahoma, Texas and eventually Louisiana, over an inch of ice accumulated from the freezing rain.[8][9]

The Ice Storm of December 2005 was another severe winter storm producing extensive ice damage across a large portion of the Southern United States on December 14 to 16. It led to power outages and at least 7 deaths.

In January 2005, Kansas had been declared a major disaster zone by President George W. Bush after an ice storm caused nearly $39 million in damages to thirty-two counties. Federal funds were provided to the counties during January 4–6, 2005 to aid the recovery process.[10]

The January 2009 Central Plains and Midwest ice storm was a crippling and historic ice storm. Most places struck by the storm, saw 2 inches (51 mm) or more of ice accumulation, and a few inches of snow on top of it. This brought down power lines, causing some people to go without power for a few days, to a few weeks. In some cases, some didn't see power for a month or more. At the height of the storm, more than 2 million people were without power.

Ice crystals fall through a cloud of super-cooled droplets—minute cloud droplets that have fallen below freezing temperature but have not frozen. The ice crystal plows into the super-cooled droplets and they immediately freeze to it. This process forms graupel, or snow pellets, as the droplet continues to accumulate on the crystal. The pellets bounce when they hit the ground.

Out ahead of the passage of a warm front, falling snow may partially melt and refreeze into a frozen rain drop before it reaches the ground. These ice pellets are called sleet in most of the US. Because it is easily seen and does not accumulate ice, it is not as dangerous as freezing rain.

Rime is a milky white accumulation of super-cooled cloud or fog droplets that freeze when they strike an object that has a temperature of 32 °F (0 °C), the freezing point of water. The process is called riming when super-cooled cloud droplets attach to ice crystals in the formation of graupel. Rime ice can pose a hazard to an airliner when it forms on a wing as an aircraft flies through a cloud of super-cooled droplets.