Shipka Pass in Bulgaria during winter

Winter is the coldest season of the year in polar and temperate zones (winter does not occur in most of the tropical zone). It occurs after autumn and before spring in each year. Winter is caused by the axis of the Earth in that hemisphere being oriented away from the Sun. Different cultures define different dates as the start of winter, and some use a definition based on weather. When it is winter in the Northern Hemisphere, it is summer in the Southern Hemisphere, and vice versa. In many regions, winter is associated with snow and freezing temperatures. The moment of winter solstice is when the Sun's elevation with respect to the North or South Pole is at its most negative value (that is, the Sun is at its farthest below the horizon as measured from the pole). The day on which this occurs has the shortest day and the longest night, with day length increasing and night length decreasing as the season progresses after the solstice. The earliest sunset and latest sunrise dates outside the polar regions differ from the date of the winter solstice, however, and these depend on latitude, due to the variation in the solar day throughout the year caused by the Earth's elliptical orbit (see earliest and latest sunrise and sunset).

The English word winter comes from the Proto-Germanic noun *wintru-, whose origin is unclear. Several proposals exist, a commonly mentioned one connecting it to the Proto-Indo-European root *wed- 'water' or a nasal infix variant *wend-.[1]

During winter in either hemisphere, the lower altitude of the Sun causes the sunlight to hit the Earth at an oblique angle. Thus a lower amount of solar radiation strikes the Earth per unit of surface area. Furthermore, the light must travel a longer distance through the atmosphere, allowing the atmosphere to dissipate more heat. Compared with these effects, the effect of the changes in the distance of the Earth from the Sun (due to the Earth's elliptical orbit) is negligible.

The manifestation of the meteorological winter (freezing temperatures) in the northerly snow–prone latitudes is highly variable depending on elevation, position versus marine winds and the amount of precipitation. For instance, within Canada (a country of cold winters), Winnipeg on the Great Plains, a long way from the ocean, has a January high of −11.3 °C (11.7 °F) and a low of −21.4 °C (−6.5 °F).[2] In comparison, Vancouver on the west coast with a marine influence from moderating Pacific winds has a January low of 1.4 °C (34.5 °F) with days well above freezing at 6.9 °C (44.4 °F).[3] Both places are at 49°N latitude, and in the same western half of the continent. A similar but less extreme effect is found in Europe: in spite of their northerly latitude, the British Isles have not a single non-mountain weather station with a below-freezing mean January temperature.[4]

Animation of snow cover changing with the seasons

Winter in the Southern Hemisphere in Tierra del Fuego, Argentina

Meteorological reckoning is the method of measuring the winter season used by meteorologists based on "sensible weather patterns" for record keeping purposes,[5] so the start of meteorological winter varies with latitude.[6] Winter is often defined by meteorologists to be the three calendar months with the lowest average temperatures. This corresponds to the months of December, January and February in the Northern Hemisphere, and June, July and August in the Southern Hemisphere. The coldest average temperatures of the season are typically experienced in January or February in the Northern Hemisphere and in June, July or August in the Southern Hemisphere. Nighttime predominates in the winter season, and in some regions winter has the highest rate of precipitation as well as prolonged dampness because of permanent snow cover or high precipitation rates coupled with low temperatures, precluding evaporation. Blizzards often develop and cause many transportation delays. Diamond dust, also known as ice needles or ice crystals, forms at temperatures approaching −40 °C (−40 °F) due to air with slightly higher moisture from above mixing with colder, surface-based air.[7] They are made of simple hexagonal ice crystals.[8] The Swedish meteorological institute (SMHI) defines thermal winter as when the daily mean temperatures are below 0 °C (32 °F) for five consecutive days.[9] According to the SMHI, winter in Scandinavia is more pronounced when Atlantic low-pressure systems take more southerly and northerly routes, leaving the path open for high-pressure systems to come in and cold temperatures to occur. As a result, the coldest January on record in Stockholm, in 1987, was also the sunniest.[10][11]

Accumulations of snow and ice are commonly associated with winter in the Northern Hemisphere, due to the large land masses there. In the Southern Hemisphere, the more maritime climate and the relative lack of land south of 40°S makes the winters milder; thus, snow and ice are less common in inhabited regions of the Southern Hemisphere. In this region, snow occurs every year in elevated regions such as the Andes, the Great Dividing Range in Australia, and the mountains of New Zealand, and also occurs in the southerly Patagonia region of South Argentina. Snow occurs year-round in Antarctica.

Astronomical and other calendar-based reckoning

In the mid-latitudes and polar regions, winter is associated with snow and ice.

In the Southern Hemisphere winter extends from June to September, pictured in Caxias do Sul in the southern highlands of Brazil.

Sea ice in the Port of Hamburg, Germany

In the Northern Hemisphere, some authorities define the period of winter based on astronomical fixed points (i.e. based solely on the position of the Earth in its orbit around the Sun), regardless of weather conditions. In one version of this definition, winter begins at the winter solstice and ends at the March equinox.[12] These dates are somewhat later than those used to define the beginning and end of the meteorological winter – usually considered to span the entirety of December, January, and February in the Northern Hemisphere and June, July, and August in the Southern.[12]

Astronomically, the winter solstice, being the day of the year which has fewest hours of daylight, ought to be in the middle of the season,[13][14] but seasonal lag means that the coldest period normally follows the solstice by a few weeks. In some cultures, the season is regarded as beginning at the solstice and ending on the following equinox[15][16] – in the Northern Hemisphere, depending on the year, this corresponds to the period between 20, 21 or 22 December and 19, 20 or 21 March.[12]

In the United Kingdom, meteorologists consider winter to be the three coldest months of December, January and February.[17] In Scandinavia, winter in one tradition begins on 14 October and ends on the last day of February.[18] In Russia, calendar winter is widely regarded to start on 1 December[19] and end on 28 February.[20] In many countries in the Southern Hemisphere, including Australia,[21][22] New Zealand and South Africa, winter begins on 1 June and ends on 31 August. In Celtic nations such as Ireland (using the Irish calendar) and in Scandinavia, the winter solstice is traditionally considered as midwinter, with the winter season beginning 1 November, on All Hallows, or Samhain. Winter ends and spring begins on Imbolc, or Candlemas, which is 1 or 2 February. This system of seasons is based on the length of days exclusively. (The three-month period of the shortest days and weakest solar radiation occurs during November, December and January in the Northern Hemisphere and May, June and July in the Southern Hemisphere.)

Also, many mainland European countries tended to recognize Martinmas or St. Martin's Day (11 November), as the first calendar day of winter.[23] The day falls at the midpoint between the old Julian equinox and solstice dates. Also, Valentine's Day (14 February) is recognized by some countries as heralding the first rites of spring, such as flowers blooming.[24]

In Chinese astronomy and other East Asian calendars, winter is taken to commence on or around 7 November, with the Jiéqì (known as 立冬 lì dōng – literally, "establishment of winter").

The three-month period associated with the coldest average temperatures typically begins somewhere in late November or early December in the Northern Hemisphere and lasts through late February or early March. This "thermological winter" is earlier than the solstice delimited definition, but later than the daylight (Celtic) definition. Depending on seasonal lag, this period will vary between climatic regions.

Cultural influences such as Christmas creep may have led to the winter season being perceived as beginning earlier in recent years, although high latitude countries like Canada are usually well into their real winters before the December solstice.

Since by almost all definitions valid for the Northern Hemisphere, winter spans 31 December and 1 January, the season is split across years, just like summer in the Southern Hemisphere. Each calendar year includes parts of two winters. This causes ambiguity in associating a winter with a particular year, e.g. "Winter 2018". Solutions for this problem include naming both years, e.g. "Winter 18/19", or settling on the year the season starts in or on the year most of its days belong to, which is the later year for most definitions. 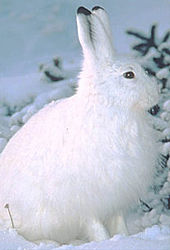 The snowshoe hare, and some other animals, change color in winter.

Ecological reckoning of winter differs from calendar-based by avoiding the use of fixed dates. It is one of six seasons recognized by most ecologists who customarily use the term hibernal for this period of the year (the other ecological seasons being prevernal, vernal, estival, serotinal, and autumnal).[25] The hibernal season coincides with the main period of biological dormancy each year whose dates vary according to local and regional climates in temperate zones of the Earth. The appearance of flowering plants like the crocus can mark the change from ecological winter to the prevernal season as early as late January in mild temperate climates.

To survive the harshness of winter, many animals have developed different behavioral and morphological adaptations for overwintering:

Some annual plants never survive the winter. Other annual plants require winter cold to complete their life cycle; this is known as vernalization. As for perennials, many small ones profit from the insulating effects of snow by being buried in it. Larger plants, particularly deciduous trees, usually let their upper part go dormant, but their roots are still protected by the snow layer. Few plants bloom in the winter, one exception being the flowering plum, which flowers in time for Chinese New Year. The process by which plants become acclimated to cold weather is called hardening. 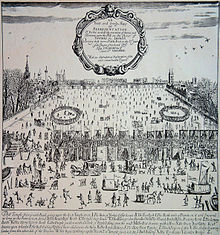 Humans are sensitive to cold, see hypothermia. Snowblindness, norovirus, seasonal depression. Slipping on black ice and falling icicles are other health concerns associated with cold and snowy weather. In the Northern Hemisphere, it is not unusual for homeless people to die from hypothermia in the winter.

One of the most common diseases associated with winter is influenza.[28] 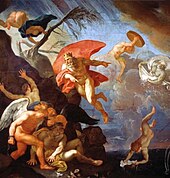 Allegory of Winter by Jerzy Siemiginowski-Eleuter with Aeolus' Kingdom of the Winds, 1683, Wilanów Palace

In Persian culture, the winter solstice is called Yaldā (meaning: birth) and it has been celebrated for thousands of years. It is referred to as the eve of the birth of Mithra, who symbolised light, goodness and strength on earth.

In Greek mythology, Hades kidnapped Persephone to be his wife. Zeus ordered Hades to return her to Demeter, the goddess of the Earth and her mother. However, Hades tricked Persephone into eating the food of the dead, so Zeus decreed that Persephone would spend six months with Demeter and six months with Hades. During the time her daughter is with Hades, Demeter became depressed and caused winter.

In Welsh mythology, Gwyn ap Nudd abducted a maiden named Creiddylad. On May Day, her lover, Gwythr ap Greidawl, fought Gwyn to win her back. The battle between them represented the contest between summer and winter.