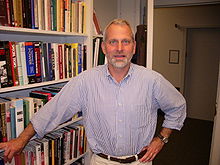 William Curti Wohlforth (born 1959) is the Daniel Webster Professor of Government in the Dartmouth College Department of Government, of which he was chair for three academic years (2006-2009). He is the author of Elusive Balance: Power and Perceptions during the Cold War (Cornell, 1993) and editor of Witnesses to the End of the Cold War (Johns Hopkins, 1996) and Cold War Endgame: Oral History, Analysis, and Debates (Penn State, 2003). Wohlforth published a seminal article [1] in 1999, challenging the common knowledge at the time that US supremacy following the end of the Cold War is expected to be short-lived[2]. He is linked to the Neoclassical realism-school and known for his work on American unipolarity, especially in collaboration with Stephen Brooks. Together they have published several articles and a book, World Out of Balance: International Relations Theory and the Challenge of American Primacy. Wohlforth was Editor-in-chief of Security Studies (journal) during 2008–2011.[3]