Waddington was born at the Château of Saint-Rémy in Eure-et-Loir, the son of a rich British industrialist, Thomas Waddington, whose family had established a large cotton manufacturing business in France, Établissements Waddington fils et Cie.

His father and mother Anne (née Chisholm) were both naturalised French citizens, and Waddington received his early education at the Lycée Louis-le-Grand in Paris. He was then sent to Rugby School in Britain, supervised by his uncle Walter Shirley. After Rugby, he was admitted to Trinity College, Cambridge; he took an MA degree, having won Second Prize in Classics as well as the prestigious Chancellor's Gold Medal.[1]

Waddington rowed in the victorious Cambridge eight in the Oxford and Cambridge Boat Race on the Thames in race of March 1849; he did not take part in the repeat race in December later that year, which Oxford won.[2]

Returning to France, Waddington devoted himself for some years to archaeological research. He travelled throughout Asia Minor, Greece and Syria, and his experiences and discoveries are detailed in two Mémoires, the first produced by the French Institute and subsequently in his Mélanges de numismatique et de philologie ("Numismatic and Philological Miscellanies", 1861).[3]

Except for his essay on "The Protestant Church in France", published in 1856 in Cambridge Essays, his remaining works all concerned archaeology. They include his Fastes des Provinces Asiatiques de l'Empire Romain ("The Governor-Lists of the Asiatic Provinces of the Roman Empire", 1872), and editions of Diocletian's Edict on Maximum Prices and of Philippe Le Bas' Voyage archéologique (1868–1877).[3]

A Fellow of the Society of Antiquaries of London, in 1865, Waddington was also elected a member of the Académie des Inscriptions et Belles-Lettres.[3]

After contesting the seat of the Aisne for the Chamber of Deputies unsuccessfully in 1865 and 1860, Waddington was elected as Deputy in January 1871. In 1873, he was appointed Minister of Public Instruction in Prime Minister Dufaure's short-lived CabinetDufaure II of 18–24 May 1873.[4]

Senator for the Aisne 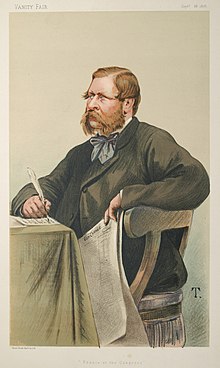 On 30 January 1876, he was elected Senator for Aisne[5] and was again nominated by Prime Minister Dufaure to the ministerial brief of Public Instruction. He was charged with devising a Bill transferring extra powers to the State, a tricky task which he negotiated through the Chamber, but was defeated in the Senate. He continued to hold office under Jules Simon's premiership until being thrown out during the Seize mai constitutional crisis (16 May 1877).

The triumph of the Republicans in the following October 1877 General Election returned Waddington to government as Minister of Foreign Affairs, again under Prime Minister Dufaure. He was one of the French plenipotentiaries at the Berlin Congress (1878). The cession of Cyprus to the United Kingdom was, at first, perceived by the French newspapers as a great blow to his diplomatic reputation, until it became clear that his discussions with Lord Salisbury had resulted in Britain's agreement to allow France a free hand in Tunisia. In 1885, he was re-elected for the senate.[5]

Early in 1879 Waddington agreed to take over from Jules Dufaure as a caretaker Prime Minister with the agreement of Léon Gambetta. He kept peace between the radicals and the reactionaries till the delay of urgent reforms lost him the support of all parties. He stepped down on 27 December.[3]

He refused the immediate offer of ambassadorship to London, preferring to take up the role in 1880 of rapporteur to the parliamentary committee for the Scrutin de liste (of elections); he delivered an adverse judgment.[3]

In 1883 Waddington accepted the appointment and dignity of Ambassadeur de France to London. He held this post for ten years until 1893, during which time his wife, Mary Alsop King, wrote some recollections of their diplomatic experiences – Letters of a Diplomat's Wife, 1883–1900 (New York, 1903), and Italian Letters of a Diplomat's Wife (1904), which were published after her husband's death.[3]