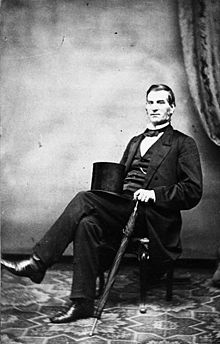 The William Henry Steeves House in Hillsborough, New Brunswick. It is now a museum.

Born and raised in Hillsborough, New Brunswick, William Henry Steeves was a descendant of Heinrich Stief, founder of the Steeves family in North America, and Regina Stahlecker.[2][3][4]

Steeves was educated in public school and began his career running a small store before becoming a partner in Steeves Brothers, a family mercantile and lumber exporting business. Steeves moved to Saint John, New Brunswick in order to further the business and became a leader in the city's financial community.

In 1855, Steeves became the first chairman of the Department of Public Works. He left government in 1856 when the reform administration of Samuel Leonard Tilley was defeated over prohibition, but he returned to office with Tilley in 1857 and remained commissioner of public works until 1861. He continued in Tilley's government as minister without portfolio until 1865 when the government fell due to its support for Canadian Confederation.

Steeves was a supporter of Confederation and was one of New Brunswick's delegates to the Charlottetown Conference and the Quebec Conference of 1864. He was appointed to the Senate of Canada as a Liberal, when the chamber was created in 1867. In that body, he acted as an advocate for the better care of the mentally ill. He served in the Senate until his death in 1873. He is interred in the Fernhill Cemetery in Saint John, New Brunswick.