William Perkins (1558–1602) was an influential English cleric and Cambridge theologian, receiving both a B.A. and M.A. from the university in 1581 and 1584 respectively, and also one of the foremost leaders of the Puritan movement in the Church of England during the Elizabethan era. Although not entirely accepting of the Church of England's ecclesiastical practices, Perkins conformed to many of the policies and procedures imposed by the Elizabethan Settlement. He did remain, however, sympathetic to the non-conformist puritans and even faced disciplinary action for his support.

Perkins was a prolific author who penned over forty works, many of which were published posthumously. In addition to writing, he also served as a fellow at Christ's College and as a lecturer at St Andrew's Church in Cambridge. He was a firm proponent of Reformed theology, particularly the supralapsarian theology of Theodore Beza and John Calvin. In addition, he was a staunch defender of Protestant ideals, specifically the five solae with a particular emphasis on solus Christus and sola Scriptura.

Perkins was born to Thomas and Anna Perkins[1] at Marston Jabbett in the parish of Bulkington, Warwickshire, England in 1558,[2] the year in which the Protestant Elizabeth I succeeded her Catholic sister Mary as Queen of England. Perkins lived his entire life under Elizabeth I, dying one year before the Queen's own death in 1603. Perkins's relationship with Elizabeth was ambiguous: on the one hand, she was Good Queen Bess, the monarch under whom England finally and firmly became a Protestant nation; on the other hand, Perkins and the other members of the Puritan movement were frustrated that the Elizabethan settlement had not gone far enough and pushed for further Reformation.[3]

Little is known of Perkins' childhood and upbringing. Sometime in his early life he was rendered lame which forced him to write with his left hand.[4] His family was evidently of some means, since in June 1577, at age 19, Perkins was enrolled as a pensioner of Christ's College, Cambridge[5] being trained in the tradition of the Reformed scholastic framework.[6] He would receive his BA in 1581 and his MA in 1584.[7]

According to an unverifiable story, Perkins was convicted of the error of his ways after he heard a Cambridge mother say to her child, "Hold your tongue, or I will give you to drunken Perkins yonder."[8] Whether or not the story is true, it is clear that Perkins had a religious awakening sometime between 1581 and 1584 during his time at Cambridge.[6]

Perkins thus began a lifelong association with the "moderate-puritan" wing of the Church of England which held views similar to those of the continental Calvinist theologians Theodore Beza, Girolamo Zanchi, and Zacharias Ursinus. Perkins's circle at Cambridge included Laurence Chaderton and Richard Greenham.[6]

Perkins as clergyman and Cambridge fellow

Following his ordination, Perkins also preached his first sermons to the prisoners of the Cambridge jail.[2] On one celebrated occasion, Perkins encountered a young man who was going to be executed for his crimes and who feared he was shortly going to be in hell: Perkins convinced the man that, through Christ, God could forgive his sins, and the formerly distraught youth faced his execution with manly composure as a result.[6]

As a "moderate Puritan", Perkins was firmly opposed to non-conformists and other separatists who refused to conform to the Church of England.[10][11] On the other hand, he also opposed the Elizabethan regime's program of imposing uniformity on the church. For example, when Archbishop of Canterbury John Whitgift imprisoned Francis Johnson for Johnson's support of a presbyterian form of church polity, Perkins loudly defended Johnson. This was not an isolated incident, and he appeared before the commission more than once.[4]

On 13 January 1587, Perkins preached a sermon denouncing the practice of kneeling to receive Communion, and was ultimately called before the Vice-Chancellor as a result. During the final set of trials against Puritan ministers in 1590–91, Perkins confirmed that he had discussed the Book of Discipline with Puritan ministers, but claimed that he could not remember whom he had talked to. Perkins married Timothye Cradocke of Grantchester on 2 July 1595. (He had previously resigned his fellowship at Christ's College, since only unmarried men could be fellows.) They became the parents of seven children, three of whom died in youth from various causes, and one of whom was born after Perkins himself had died.[6]

Perkins was a proponent of "double predestination"[6][12] and was a major player in introducing the thought of Theodore Beza to England. He viewed the Reformed concept of the Covenant of Grace, which is central to Reformed soteriology and double predestination, to be a doctrine of great consoling value.[13] He was responsible for the publication in English of Beza's famous chart about double predestination. In addition to adopting a Reformed soteriology, he also strongly held to the doctrines of solo Christo and sola Scriptura which "serve as the twin foundation stones for what Perkins conceived as biblical preaching."[5][14] He was also a major proponent of literal interpretation[15] utilizing the regula fidei, or Rule of Faith. This principle advocates that the unclear portions of scripture ought to be interpreted by the clear portions rather than by tradition or speculation.[16] He did, however, leave room for figurative or analogical language when context demands.[17]

Although relatively unknown to modern Christians, Perkins has had an influence that is felt by Christians all around the world.[9] and was highly regarded in the Elizabethan Church.[5] In addition, Perkins's views on double predestination made him a major target of Jacobus Arminius, the Dutch Reformed clergyman who opposed the doctrine of predestination.[18][19] He also was influential in the theological development of the American puritan philosopher and theologian Jonathan Edwards.[20] In addition, some consider the hermeneutics of Perkins to be a model that ought to be emulated.[16]

In his lifetime, Perkins attained enormous popularity, with sales of his works eventually surpassing even Calvin's. When he died, his writings were selling more copies than those of many of the most famous of the Reformers combined.[6]

From his position at Cambridge, Perkins was able to influence a whole generation of English churchmen.[21] His pupils include:

James Montagu preached his funeral sermon, taking as his text Joshua 1.2, ‘Moses my servant is dead’. He was buried in St. Andrew's, the church which he had pastored for eighteen years.[6] 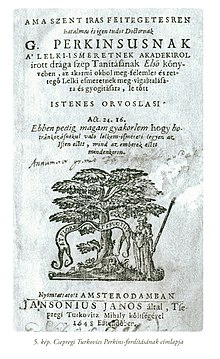 A Hungarian translation of a work by Perkins, 1648