Curaçao World Heritage Site First-level NUTS of the European Union
Former capital of the Netherlands Antillies
This article is about the capital of Curaçao. For other uses, see Willemstad (disambiguation).
"Punda" redirects here. For the 2010 Indian film, see Punda (film).
Place in Curaçao, Kingdom of the Netherlands

listen)) is the capital city of Curaçao, an island in the southern Caribbean Sea that forms a constituent country of the Kingdom of the Netherlands. Formerly the capital of the Netherlands Antilles prior to its dissolution in 2010, it has an estimated population of 150,000. The historic centre of the city consists of four quarters: the Punda and Otrobanda, which are separated by the Sint Anna Bay, an inlet that leads into the large natural harbour called the Schottegat, as well as the Scharloo and Pietermaai Smal quarters, which are across from each other on the smaller Waaigat harbour. Willemstad is home to the Curaçao synagogue, the oldest surviving synagogue in the Americas. The city centre, with its unique architecture and harbour entry, has been designated a UNESCO World Heritage Site.

Punda was established in 1634, when the Dutch captured the island from Spain. The original name of Punda was de punt in Dutch. Otrobanda, which was founded in 1707, is the newer section of the city and is considered to be the cultural centre of Willemstad. Its name originated from the Papiamentu otro banda, which means "the other side".[citation needed]

The Curaçao synagogue was built by Sephardic Portuguese Jews from Amsterdam and Recife, Brazil.

Willemstad in the late afternoon.

Jetair Caribbean is the national airline of Curaçao, has its corporate head office in Maduro Plaza.[1]

Fort Amsterdam as seen from sea

Tourism is a major industry and the city has several casinos. The city centre of Willemstad has an array of colonial architecture that is influenced by Dutch styles. Archaeological research has also been developed there.[2]

Owing to its location near the Venezuelan oilfields, its political stability and its natural deep water harbour, Willemstad became the site of an important seaport and refinery. Willemstad's harbour is one of the largest oil handling ports in the Caribbean. The refinery, at one point the largest in the world, was originally built and owned by Royal Dutch Shell in 1915.[3]

The four companies comprising the Royal Dutch Shell[4] refining operation; the actual refinery, oil bunkering, the tugboat company (KTK) and the local distribution of refined products (CurOli/Gas) were each sold to the government of Curaçao in 1985[5] for the symbolic sum of one guilder per company, or a total of 1 guilder[6] and is now leased to PDVSA, the state owned Venezuelan oil company. Schlumberger, the world's largest oil field services company is incorporated in Willemstad.[7]

Numerous financial institutions are incorporated in Willemstad due to Curaçao's favourable tax policies.

In 1985, Willemstad hosted the Curaçao Grand Prix for Formula 3000. The race was won by Danish racing driver John Nielsen. Pabao Little League has appeared in nine Little League World Series, winning in 2004. They were crowned the International Champions in 2005 and 2019. In 2008, another Pabao Little League team won the Junior League World Series, after winning the Latin America Region, then defeating the Asia-Pacific Region and Mexico Region champions to become the International champion, and finally defeating the U.S. champion (West Region), Hilo American/National LL (Hilo, Hawaii), 5–2. 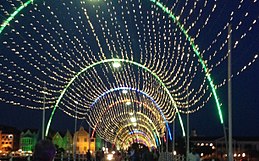 Willemstad is served by Curaçao International Airport, located 12 kilometres (7.5 mi) north of the city, which is annually used by about two million passengers.

Punda and Otrobanda are connected by Queen Emma Bridge, a long pontoon bridge. Although it is still in use, these days most road traffic now uses the Queen Juliana Bridge built in 1967 (rebuilt 1974) which arches high over the bay further inland. Nearby is also the now non-functioning Queen Wilhelmina drawbridge.