Drees studied Accounting at the Amsterdam Public Trade School obtaining an Bachelor of Accountancy degree and worked as a bank teller for the Twentsche Bank from July 1903 until July 1906 as a stenographer for Parliament from January 1907 until August 1919. Drees was elected as a Member of the House of Representatives after the election of 1933 taking office on 9 May 1933 serving as a frontbencher and spokesperson for Social Affairs. After Party Leader and Parliamentary leader Willem Albarda was appointed as Minister of Water Management in the Cabinet De Geer II Drees was selected as his successor on 10 August 1939. Shortly after the German Invasion Party Leader Albarda announced he was stepping down and Drees was anonymously selected as his successor as Leader on 14 May 1940. Following the end of World War II Drees was appointment as Deputy Prime Minister and Minister of Social Affairs in the national unity Cabinet Schermerhorn–Drees taking office on 25 June 1945. In February 1946 Drees was one of the co-founders of the Labour Party and became its first Leader. For the election of 1946 Drees served as one of the Lijsttrekkers (top candidates) and following a cabinet formation continued his offices in the Cabinet Beel I. For the election of 1948 Drees served again as one of the Lijsttrekkers and following a successful cabinet formation with the Catholics formed the Cabinet Drees–Van Schaik with Drees becoming Prime Minister of the Netherlands taking office on 7 August 1948.[5]

Drees retired from active politics at 72 but continued to be active as a valued historian and prolific author and served on several state commissions and councils on behalf of the government. Drees was known for his abilities as a skillful team leader and effective manager. During his premiership, his cabinets were responsible for several major social reforms to social security, welfare, Child benefits and education, overseeing the decolonization of the Dutch East Indies following the Indonesian National Revolution, the fallout of the annexation of former German territory and dealing with several major crises such as the North Sea flood of 1953 and Hofmans-scandal. Drees was granted the honorary title of Minister of State on 22 December 1958 and continued to comment on political affairs as a statesman until his death in May 1988 at the age of 101. He holds the record as the third longest-serving and longest-lived Prime Minister at 101 years, 314 days and his premiership is consistently regarded both by scholars and the public to have been one the best in Dutch history.[6][7][8]

Willem Drees was born in Amsterdam on 5 July 1886. After completing his secondary education in 1903 at the Hogeschool van Amsterdam, he worked until 1906 for the Twentsche Bank in Amsterdam. This was followed by a period as a stenographer with the Municipal Council of Amsterdam and then between 1907 and 1919 with the States General of the Netherlands.

Prime Minister of Belgium Paul-Henri Spaak and Prime Minister Willem Drees at a Benelux conference in The Hague on 10 March 1949. 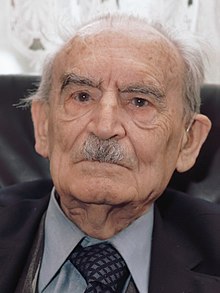 In 1904 he joined the Social Democratic Workers' Party, which later was absorbed into the Labour Party in 1946. From 1910 to 1931 he was chairman of The Hague branch of the Social Democratic Workers' Party and between 1913 and 1941 a member of the municipal council of The Hague. During that period he was alderman for social affairs from 1919 to 1931 and for finance and public works through to 1933.[5]

For 22 years between 1919 and 1941 Drees also held a seat on the Provincial Council of South Holland and for 19 years between 1927 and 1946 one on the Social Democratic Workers' Party executive. Between 1933 and 1940 he represented the Social Democratic Workers' Party in the House of Representatives and from 1939 as leader in the House of Representatives

During the German occupation he was taken hostage in Buchenwald concentration camp in October 1940. Freed one year later, he played a prominent role, as vice chairman and acting chairman of the illegal Executive Committee of the SDAP, and as a prominent participant in secret interparty consultations. In 1944 he became chairman of the Contact Commissie van de Illegaliteit and a member of the College van Vertrouwensmannen which the government in exile charged with the preparation of steps to be taken at the time of liberation.

Thereafter, from 24 June 1945 to 7 August 1948 Drees was Minister of Social Affairs and Deputy Prime Minister in the Cabinet Schermerhorn/Drees.

Prime Minister of the Netherlands

Drees's period in office saw at least four major political developments: the traumas of decolonisation, economic reconstruction, the establishment of the Dutch welfare state,[9][10] and international integration and co-operation, including the formation of Benelux, the OEEC, NATO, the ECSC, and the EEC. When his Cabinet broke up in December 1958, he was appointed to the honorary position of Minister of State, the Labour Party appointed him a member of its Executive Council for life in 1959. Due to impaired hearing he stopped attending its meetings in 1966. He strongly disagreed with New Left tendencies in the membership and strategies of the Labour Party. He eventually gave up membership of a party he had served for close to 67 years.

Drees was an Esperantist and addressed the 1954 World Congress of Esperanto, which was held in Haarlem.[11]

A wide range of social reforms were carried out during Drees's tenure as Prime Minister. The Occupational Pensions Funds Act of March 1949 made membership of industry-wide pension funds compulsory, while the General Old Age Pensions Act of May 1956 introduced universal flat-rate old age pensions for all residents as a right and with no retirement condition at the age of 65. The Retired Persons' Family Allowances Act of November 1950 established a special allowance for pensioned public servants with children, a law of November 1950 extended compulsory health insurance to cover other groups, such as old-age and invalidity pensioners, and a law of December 1956 introduced health insurance with special low contributions for old-aged pensioners below a certain income ceiling. A law of August 1950 established equal rights for illegitimate children, and introduced an allowance for disabled children between the ages of 16 and 20. The Temporary Family Allowances Act for the Self-employed of June 1951 entitled self-employed persons with low incomes to family allowance for the first and second child, and a law of February 1952 introduced an allowance for studying and for disabled children until the age of 27.[12] In 1950, works councils were established,[13] and in 1957 the dismissal of female civil servants upon marriage was abolished.[14]

In the field of housing, the Implementation for Rent Act (1950) fixed rents and rent increases, while the Regional and Town Planning Act (1950) regulated the planning of house building. In addition, the Reconstruction Act of 1950 established housebuilding programmes,[15] and legislation was passed on house building standards (1951), the uniformity of buildings (1954), and uniform building standards (1956).[16] In education, measures were carried out such as increased expenditure on the system, a reduction in registration fees at State universities and at the institute of technology,[15] and the granting (in January 1956) of a special benefit to primary school teachers and to certain categories of vocational teachers, "particularly those who risk being unemployed and who cannot lay claim to a retaining fee."[17] Other initiatives included secondary schools for girls and special primary education in 1949, teacher training colleges in 1952,[18] the extension of compulsory education to 8 years in 1950,[19] and the Nursery Education Act of 1955, which introduced the option of kindergarten for children from the age of four upwards, while also establishing regulations for nursery-school teachers.[12] A department of social welfare was also established (1952), while laws were passed on unemployment benefits (1952) and a widows' and orphans' pension (1956).[16]

On 28 July 1910, Drees married Catharina Hent (6 May 1888 – 30 January 1974)[20][21] and had two sons and two daughters, Both his sons Jan Drees and Willem Drees Jr. were active members of the Labour Party, but left the party around 1970 to join the Democratic Socialists '70. The cause was a row with younger party members who wanted to plot a more radical left-wing course for the party. Drees himself left the Labour Party in 1971 leaving them without their icon, but he never joined the Democratic Socialists '70.

Drees was a Teetotaler. Willem Drees died on 14 May 1988 in The Hague, two months before his 102nd birthday.[22] From 22 August 1986, when former Turkish President Celâl Bayar died, until his own death Drees was the world's oldest living former head of government.