He played for Pepperdine University in the late 1990s, where he met his wife. 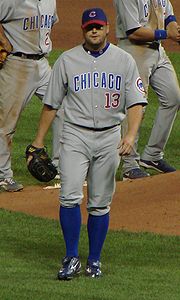 Ohman during his time with the Cubs.

Ohman was selected in the eighth round of the 1998 MLB Draft by the Chicago Cubs. He spent all of 1998 and 1999 in the Cubs minor league system.

Ohman made his major league debut on September 19, 2000 against the Milwaukee Brewers, pitching one scoreless inning of relief. He also pitched for the Cubs in 2001, but had Tommy John surgery in 2002 and did not pitch again until 2004. In 2004, he pitched for the minor league Iowa Cubs and in the following off-season, he was added to the Major League 40 man roster. On April 26, 2005, he was called up from the minors and on the same day, made his major league first pitching appearance since 2001. Ohman also recorded the Opening Day win for the Cubs on April 2, 2006.

On December 4, 2007, Ohman was traded along with Omar Infante to the Atlanta Braves for José Ascanio. With Atlanta, Ohman enjoyed a successful season out of the Braves' bullpen, appearing in 83 games. He finished the season as one of the team's most successful relievers, with a record of 4-1 and an ERA of 3.68. He became a free agent at the conclusion of the season.[1]

On March 30, 2009, Ohman signed a minor league contract with the Los Angeles Dodgers,[2] and made the club out of spring training as a situational left-handed reliever.

However, Ohman only made 21 appearances with the Dodgers in 2009 and spent the last four months of the season on the disabled list after suffering a shoulder injury. The Dodgers declined his option on October 16 and he became a free agent.[3]

On July 31, 2010, Ohman was dealt to the Florida Marlins in exchange for Rick VandenHurk. He appeared in 17 games for the Marlins, with a 3.00 ERA.

Ohman signed with the Cincinnati Reds on July 21, and was assigned to the Triple-A Louisville Bats.

Ohman signed a minor league contract with the Washington Nationals on February 11, 2013. He was released on March 9, 2013.

Ohman was named the pitching coach for the Palm Beach Cardinals in 2018.

Ohman's repertoire consists mainly of four-seam and two-seam fastballs around 88–91 mph, as well as a slider at 79–82. He throws a handful of curveballs and changeups. Half of his pitches with two strikes are sliders.[6]

After he retired, Ohman made a business called Ace Baseball. Ace Baseball is a business that teaches young players key tips for pitching and hitting.