Boundary Ranges Chilkoot Pass Skagway Historic District and White Pass
This article is about the pass between Alaska and British Columbia. For White Pass in the U.S. state of Washington, see White Pass (Washington).

White Pass, also known as the Dead Horse Trail, (elevation 873 m or 2,864 ft) is a mountain pass through the Boundary Ranges of the Coast Mountains on the border of the U.S. state of Alaska and the province of British Columbia, Canada. It leads from Skagway, Alaska, to the chain of lakes at the headwaters of the Yukon River, Crater Lake, Lake Lindeman, and Bennett Lake.

The White Pass was closely controlled by the Chilkoot Indians and was unknown to non-natives until 1887. William Ogilvie had heard reports of a low pass from the head of Chilkoot Inlet to the headwaters of the Lewes River (Yukon River), while in Juneau. In June 1887, Ogilvie was at the head of Taiya Inlet doing a survey from Pyramid Island up through the Chilkoot Pass. William Moore, who was accompanying him, had experience building roads in mountainous areas and wanted to try this route since the Chilkoot Pass was reported to be too steep for a wagon road. Ogilvie made inquiries and learned there was such a pass, but could not induce any Chilkoots to guide Moore. Skookum Jim Mason had been through this low-altitude pass before, and with much talk and encouragement, he was induced to reveal it. Ogilvie sent Moore and Skookum Jim Mason over this low altitude pass while he continued with his surveying work on the Chilkoot Pass.[1] Moore did a rough survey of the new pass and returned with the satisfaction that he had found the route for his wagon road. The White Pass was named for the Canadian Minister of the Interior Thomas White by William Ogilvie.[2]

William Moore and his son returned to stake a homesteader's claim in Skagua, as it was then known. They built a cabin and a wharf and surveyed a town site they called Mooresville. In 1894, the North-West Mounted Police arrived at Dyea and Mooresville on their way to Canada's Yukon Territory. The first group of prospectors hiked up Moore's crude trail over the White Pass. Once the gold rush began, the Moores were overrun. Mooresville was resurveyed by Frank Reid as Skaguay. The crude trail was made into a toll road by George A. Brackett, and the North-West Mounted Police guarded the passes and briefly maintained a post in Skaguay, which Canada claimed.[3] 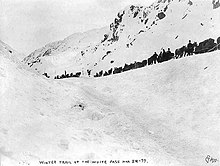 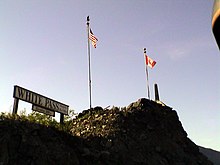 The White Pass trail was one of the two main passes used by prospectors during the Klondike Gold Rush. The White Pass was an easier route to Lake Bennett than the Chilkoot Trail a few kilometers to the west, but it harbored a criminal element that preyed on the cheechakos (newcomers to the Klondike). These con artists were believed to be members of the infamous Soapy Smith gang from Skagway, Alaska. In 1898, Smith was killed at the famed Shootout on Juneau Wharf and his gang were run out of Skagway and the White Pass. So many horses died during the gold rush, the trail became known as the "Dead Horse Trail". The trail ended at Lake Bennett, where the prospectors built or purchased rafts or boats to float down the Yukon River to the Klondike gold fields near Dawson City. 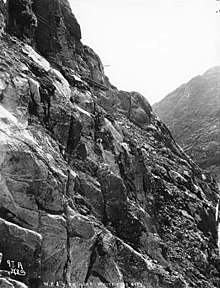 The Skagway Historic District and White Pass is a U.S. National Historic Landmark.

Due to the harsh climate, grueling conditions, and length of journey, travelers on both the Chilkoot Trail and White Pass suffered from widespread starvation. Many of the starving people on the White Pass made meals of dead horses they found along the road. Furthermore, some travelers were known to go insane, most likely due to rotting of bodies in the snow.[citation needed]