Advertisement - You can get this game from STEAM
For other uses, see Whirlwind (disambiguation). 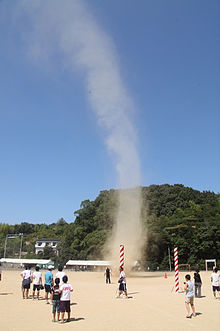 A dust devil at school ground 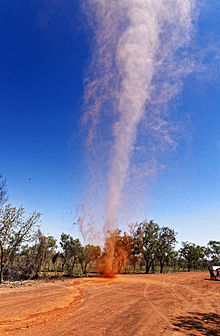 A whirlwind is a weather phenomenon in which a vortex of wind (a vertically oriented rotating column of air) forms due to instabilities and turbulence created by heating and flow (current) gradients. Whirlwinds occur all over the world and in any season.

Whirlwinds are subdivided into two main types, the great (or major) whirlwinds, and the lesser (or minor) whirlwinds. The first category includes tornadoes, waterspouts, and landspouts. The range of atmospheric vortices constitute a continuum and are difficult to categorize definitively. Some lesser whirlwinds may sometimes form in a similar manner to greater whirlwinds with related increase in intensity. These intermediate types include the gustnado and the fire whirl. Other lesser whirlwinds include dust devils, as well as steam devils, snow devils, debris devils, leaf devils or hay devils, water devils, and shear eddies such as the mountainado and eddy whirlwinds.

A major whirlwind (such as a tornado) is formed from supercell thunderstorms (the most powerful type of thunderstorm) or other powerful storms. When the storms start to spin, they react with other high altitude winds, causing a funnel to spin. A cloud forms over the funnel, making it visible.

Major whirlwinds last longer because they are formed from very powerful winds, and it is hard, though not impossible, to interrupt them. Minor whirlwinds are not as long-lived; the winds that form them do not last long, and when a minor whirlwind encounters an obstruction (a building, a house, a tree, etc.), its rotation is interrupted, as is the windflow into it, causing it to dissipate.

Eddies and vortices may form in any fluid. In water, a whirlpool is a similar phenomenon.