Consider a thermometer wrapped in a water-moistened cloth. The drier and less humid the air is, the faster the water will evaporate. The faster water evaporates, the lower the thermometer's temperature will be relative to air temperature.

But water can only evaporate if the air around it can absorb more water. This is measured by comparing how much water is in the air, compared to the maximum which could be in the air—the relative humidity. 0% means the air is completely dry, and 100% means the air contains all the water it can hold in the present circumstances and it cannot absorb any more water (from any source).

This is why we feel cooler in dry air. The drier the air, the more moisture it can hold beyond what is already in it, and the easier it is for extra water to evaporate. The result is that sweat evaporates more quickly in drier air, cooling down the skin faster. But if the relative humidity is 100%, no water can evaporate, and cooling by sweating or evaporation is not possible.

When relative humidity is 100%, a wet bulb thermometer can also no longer be cooled by evaporation, so it will read the same as an unwrapped thermometer.

The wet-bulb temperature is the lowest temperature which may be achieved by evaporative cooling of a water-wetted (or even ice-covered), ventilated surface.

By contrast, the dew point is the temperature to which the ambient air must be cooled to reach 100% relative humidity assuming there is no further evaporation into the air; it is the point where condensation (dew) and clouds would form.

For air at a known pressure and dry-bulb temperature, the thermodynamic wet-bulb temperature corresponds to unique values of the relative humidity and the dew point temperature. It therefore may be used for the practical determination of these values. The relationships between these values are illustrated in a psychrometric chart.

Cooling of the human body through perspiration is inhibited as the relative humidity of the surrounding air increases in summer. Other mechanisms may be at work in winter if there is validity to the notion of a "humid" or "damp cold."

Lower wet-bulb temperatures that correspond with drier air in summer can translate to energy savings in air-conditioned buildings due to:

The temperature of an air sample that has passed over a large surface of the liquid water in an insulated channel is called the thermodynamic wet-bulb temperature—the air has become saturated by passing through a constant-pressure, ideal, adiabatic saturation chamber.

Thermodynamic wet-bulb temperature is plotted on a psychrometric chart. 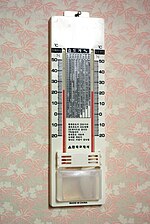 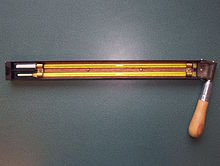 A sling psychrometer. The sock is wet with distilled water and whirled around for a minute or more before taking the readings.

An actual wet-bulb thermometer reads a temperature that is slightly different from the thermodynamic wet-bulb temperature, but they are very close in value. This is due to a coincidence: for a water-air system the psychrometric ratio (see below) happens to be close to 1, although for systems other than air and water they might not be close.

To understand why this is so, first consider the calculation of the thermodynamic wet-bulb temperature.

In this case, a stream of unsaturated air is cooled. The heat from cooling that air is used to evaporate some water which increases the humidity of the air. At some point the air becomes saturated with water vapor (and has cooled to the thermodynamic wet-bulb temperature). In this case we can write the following balance of energy per mass of dry air:

For the case of the wet-bulb thermometer, imagine a drop of water with unsaturated air blowing over it. As long as the vapor pressure of water in the drop (function of its temperature) is greater than the partial pressure of water vapor in the air stream, evaporation will take place. Initially, the heat required for the evaporation will come from the drop itself since the fastest moving water molecules are most likely to escape the surface of the drop, so the remaining water molecules will have a lower average speed and therefore a lower temperature. If this were the only thing that happened and the air started bone dry, if the air blew sufficiently fast then its partial pressure of water vapor would remain constantly zero and the drop would get infinitely cold.[citation needed]

Clearly this doesn't happen. It turns out that, as the drop starts cooling, it's now colder than the air, so convective heat transfer begins to occur from the air to the drop. Also, understand that the evaporation rate depends on the difference of concentration of water vapor between the drop-stream interface and the distant stream (i.e. the "original" stream, unaffected by the drop) and on a convective mass transfer coefficient, which is a function of the components of the mixture (i.e. water and air).

After a certain period, an equilibrium is reached: the drop has cooled to a point where the rate of heat carried away in evaporation is equal to the heat gain through convection. At this point, the following balance of energy per interface area is true:

Let us rearrange that equation into:

Now let's go back to our original "thermodynamic wet-bulb" experiment, Experiment 1. If the air stream is the same in both experiments (i.e.

are the same), then we can equate the right-hand sides of both equations:

It is clear now that if

then the temperature of the drop in Experiment 2 is the same as the wet-bulb temperature in Experiment 1. Due to a coincidence, for the mixture of air and water vapor this is the case, the ratio (called psychrometric ratio) being close to 1.[6]

Experiment 2 is what happens in a common wet-bulb thermometer. That's why its reading is fairly close to the thermodynamic ("real") wet-bulb temperature.

Experimentally, the wet-bulb thermometer reads closest to the thermodynamic wet-bulb temperature if:

In practice the value reported by a wet-bulb thermometer differs slightly from the thermodynamic wet-bulb temperature because:

Psychrometers are instruments with both a wet-bulb and a dry-bulb thermometer.

A wet-bulb thermometer can also be used outdoors in sunlight in combination with a globe thermometer (which measures the incident radiant temperature) to calculate the Wet Bulb Globe Temperature (WBGT).

This term, as defined in this article, may be[vague] most prevalent in meteorology.

"The relationship between the isobaric and adiabatic processes is quite obscure. Comparisons indicate, however, that the two temperatures are rarely different by more than a few tenths of a degree Celsius, and the adiabatic version is always the smaller of the two for unsaturated air. Since the difference is so small, it is usually neglected in practice."[7]

Living organisms can survive only within a certain temperature range. When the ambient temperature is excessive, humans and many animals cool themselves below ambient by evaporative cooling (sweat in humans and horses, saliva and water in dogs and other mammals); this helps to prevent potentially fatal hyperthermia due to heat stress. The effectiveness of evaporative cooling depends upon humidity; wet-bulb temperature, or more complex calculated quantities such as Wet Bulb Globe Temperature (WBGT) which also takes account of solar radiation, give a useful indication of the degree of heat stress, and are used by several agencies as the basis for heat stress prevention guidelines.

A sustained wet-bulb temperature exceeding 35 °C (95 °F) is likely to be fatal even to fit and healthy people, unclothed in the shade next to a fan; at this temperature our bodies switch from shedding heat to the environment, to gaining heat from it.[9] Thus 35 °C (95 °F) is the threshold beyond which the body is no longer able to adequately cool itself. A study by NOAA from 2013 concluded that heat stress will reduce labor capacity considerably under current emissions scenarios.[10]

A 2010 study concluded that under a worst-case scenario for global warming with temperatures 12 °C (22 °F) higher than 2007, the wet-bulb temperature limit for humans could be exceeded around much of the world in future centuries.[11] A 2015 study concluded that parts of the globe could become uninhabitable.[12] An example of the threshold at which the human body is no longer able to cool itself and begins to overheat is a humidity level of 50% and a high heat of 46 °C (115 °F), as this would indicate a wet-bulb temperature of 35 °C (95 °F).[13]

In 2018, South Carolina implemented new regulations to protect high school students from heat-related emergencies during outdoor activities. Specific guidelines and restrictions are in place for wet-bulb temperatures between 82.0 °F (27.8 °C) and 92.0 °F (33.3 °C); wet-bulb temperatures of 92.1 °F (33.4 °C) or greater require all outdoor activities to be canceled.[14][15]

The following locations have recorded wet-bulb temperatures of 34 °C (93 °F) or higher. Note that weather stations are typically at airports, not necessarily the greatest heat sinks, so other locations in the city may have experienced higher values.[21]