Westmount is an affluent suburb on the Island of Montreal, in southwestern Quebec, Canada. It is an enclave of the city of Montreal, with a population of 19,931 as of the Canada 2011 Census.

Westmount is home to schools, an arena, a pool, a public library and a number of parks, including Westmount Park, King George Park (also known as Murray Hill Park) and Westmount Summit. The city operates its own electricity distribution company Westmount Light & Power (Hydro-Westmount). The city is also the location of two Canadian Forces Primary Reserves: The Royal Montreal Regiment and 34th Signals Regiment.

Traditionally, the community of Westmount has been a wealthy and predominantly anglophone enclave, having been at one point the richest community in Canada. It now competes with the Vancouver neighbourhoods of Shaughnessy and Kerrisdale, and the Toronto neighbourhoods of Lawrence Park, Forest Hill, Rosedale, and The Bridle Path, for the title. 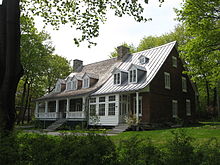 When the first French colonists settled in the area in the middle of the seventeenth century, this area was known by several names including La Petite Montagne, Notre-Dame-de-Grâce and Côte-Saint-Antoine. A former farmhouse from this era, Hurtubise House, is the oldest house still standing in Westmount and is currently under renovation.

It was renamed Westmount, in 1895, reflecting the geographical location of the city on the southwest slope of Mount Royal and the presence of a large English-speaking population.

In the twentieth century, Westmount was home to some of Montreal's wealthiest families including the Bronfmans and the Molsons. This made the city a symbolic target of Front de libération du Québec terrorist bombings in the 1960s, culminating in the 1970 October Crisis. 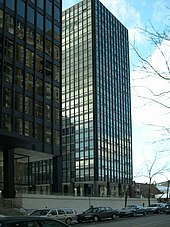 In 2001, while trying to prevent Westmount from being amalgamated into the city of Montreal, Westmount Mayor Peter Trent and city council asserted that the city was a designated anglophone institution and should not be merged into francophone greater Montreal. In response to this opposition, Municipal Affairs Minister Louise Harel said that Westmount's resistance "reeked of colonialism" and that the opposition was an "ethnic project", statements for which she would refuse to apologize.[5] When asked for comment, Quebec Premier Bernard Landry said the minister had his full support and that the opposition was little more than Quebec bashing.[6] Several federalist public figures criticized Landry's statement: Jean Charest called it insulting to the intelligence of the citizens of Quebec; Joseph Gabary, president of the Quebec Chapter of the Canadian Jewish Congress, called the language "crude"; Alliance Quebec also criticized the premier for singling out the city for special criticism.[7]

On January 1, 2002, as part of the 2002–2006 municipal reorganization of Montreal, it was merged into the city of Montreal and became a borough. However, after a change of government and a 2004 referendum, it was re-constituted as an independent city on January 1, 2006. Nevertheless, it remains part of the urban agglomeration of Montreal and the bulk of its municipal taxes go to the Agglomeration Council, which oversees activities common to all municipalities on the Island of Montreal (e.g. police, fire protection, public transit) even after the demerger.

The city is roughly 4 km2 (1.5 sq mi), and occupies an area of land on the south face of the southern peak of Mount Royal. The city, most of which is on steep terrain, extends from the summit to the end of the narrow plateau at the foot of the mountain.

Most of the city is residential. Homes increase in size and value toward the top of the mountain, with the largest and most expensive being on or near Summit Circle.

Notable buildings include Place Alexis Nihon and the Westmount Square complex, which was designed by Ludwig Mies van der Rohe and funded largely by Westmount resident Samuel Bronfman, the founder of the Seagram liquor empire.

There are several small commercial districts on Sherbrooke Street from the city's western boundary to the intersection of Sherbrooke Street and Victoria Avenue ("Victoria Village"), on Saint Catherine Street across from Place Alexis Nihon, on Greene Avenue and on De Maisonneuve Boulevard near the Atwater metro station.

"Westmount Adjacent" is a term applied by realtors to a district in the borough of Côte-des-Neiges–Notre-Dame-de-Grâce, located in between the city of Westmount, the Décarie Expressway, De Maisonneuve Boulevard and the lands of Villa Maria private Catholic girls school.[8]

There are several parks within the city, including King George Park (also known as Murray Hill) and Westmount Park. A forest area is located at Westmount Summit, within Summit Circle.

Located between Sherbrooke Street and De Maisonneuve Boulevard to the north and south, and Melville and Lansdowne Avenue to the east and west, this 1,141,002 sq ft (106,002.6 m2) park is the second largest in Westmount.

The landscaping design was undertaken in 1912 by M.J. Manning, and comprises large playing fields at the east and south sides, and Westmount Arena and adjacent swimming pool at the southwest corner. The central area contains an extensive playground, footpaths, ponds and wading pools, and tennis courts. Westmount Public Library, built in 1897,[9] Victoria Hall, and a large greenhouse are located on the north side.[10]

Since regaining its status as a city, Westmount is governed by a City Council made up of a mayor and eight "district" councillors. The current mayor of Westmount is Christina Smith, who was elected interim mayor at a special council meeting on April 24, 2017, following the retirement of long-serving Mayor Peter Trent. Smith later went on to win an election November 5, 2017 to remain mayor. In addition to the local city council, Westmount is represented by its mayor on the Montreal Agglomeration Council. 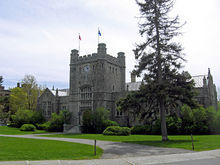 Throughout Quebec, Westmount is known as an overwhelmingly Liberal riding, both federally and provincially.

On the federal level, Westmount is represented in the Notre-Dame-de-Grâce—Westmount riding. The riding was won by Marc Garneau in the 2015 federal election.

Provincially, the city is represented in the riding of Westmount–Saint-Louis by MNA Jennifer Maccarone of the Quebec Liberal Party.

As of the Canada 2016 Census, the population was 20,312. StatsCan lists the median after-tax income in 2015 as $41,674. The three largest occupation categories were management, business, and "education, law and social, community and government services"; each of these sectors employed about 20% of Westmount workers.[12]

According to the 2011 census, there were 8,460 households, out of which 26.2% had children living with them, 47.5% were married couples living together, 6.7% had a female lone-parent as a householder, and 35.5% of all households were made up of individuals. The average married-couple family size was 3.1.

of residents spoke English, and 21.3%

spoke French, as their first language.[15]

The city is home to two CEGEPs: the public anglophone Dawson College and the private anglophone Marianopolis College.

English-language public schools in Westmount are operated by the English Montreal School Board (EMSB). These include Westmount High School, its sister elementary school Westmount Park School and Roslyn Elementary School, which is significant for introducing the first French Immersion Program on the Island of Montreal in 1968.[16]

Westmount is also home to several private schools, including coeducational St. George's School of Montreal as well as Miss Edgar's and Miss Cramp's School, The Study and the French-language Villa Sainte-Marcelline for girls and Selwyn House School for boys.

Westmount was home of the Montreal Arena, the third arena in history to be built specifically for hockey. It was the home rink for the Montreal Wanderers, one of the great teams of the early hockey era, as well as the legendary Montreal Canadiens. The arena burned down in 1918, causing the Wanderers to disband.

Westmount's Westmount Arena is part of a joint arena and pool complex built in 1959. The arena honours early Montreal ice hockey teams with replica Stanley Cup banners. It is home to the Westmount Wings, Lasalle/Westmount Cobras and was the home of the Westmount Predators that are no longer active.

Westmount is home to the Westmount Lynx Lacrosse Club, which has field lacrosse teams for boys and girls aged 8–16.

In addition, the city's swim team, the Westmount Dolphins,[18] won the 2007 Section B Alps finals.

Westmount is the birthplace of tennis star Eugenie Bouchard.