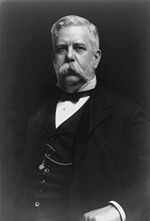 Westinghouse Electric was founded by George Westinghouse in Pittsburgh, Pennsylvania, in 1886. The firm became active in developing electric infrastructure throughout the United States. The company's largest factories were located in East Pittsburgh Pennsylvania, and Lester, Pennsylvania[1] and in Hamilton, Ontario, where they made turbines, generators, motors, and switch gear for generation, transmission, and use of electricity.[2] In addition to George Westinghouse, early engineers working for the company included Frank Conrad, Benjamin Garver Lamme, Bertha Lamme (America’s first woman mechanical engineer), Oliver B. Shallenberger, William Stanley, Nikola Tesla, Stephen Timoshenko and Vladimir Zworykin.

Westinghouse purchased CBS Inc. in 1995. Westinghouse Electric Corporation changed its name to and became CBS Corporation in 1997. In 1998, the Power Generation Business Unit, headquartered in Orlando, Florida, was sold to Siemens AG, of Germany. A year later, CBS sold all of its commercial nuclear power businesses to British Nuclear Fuels Limited (BNFL). In connection with that sale, certain rights to use the Westinghouse trademarks were granted to the newly formed BNFL subsidiary, Westinghouse Electric Company. That company was sold to Toshiba in 2006.[3]

In 1990, Westinghouse experienced a financial catastrophe when the Corporation lost over one billion dollars due to bad high-risk, high-fee, high-interest loans made by its Westinghouse Credit Corporation lending arm.[4]

In an attempt to revitalize the corporation, the Board of Directors appointed outside management in the form of CEO Michael Jordan, who brought in numerous consultants to help re-engineer the company in order to realize the potential that they saw in the broadcasting industry. Westinghouse reduced the workforce in many of its traditional industrial operations and made further acquisitions in broadcasting to add to its already substantial Group W network, purchasing CBS in 1995. Shortly after, Westinghouse purchased Infinity Broadcasting, TNN, CMT, American Radio Systems, and rights to NFL broadcasting. These investments cost the company over fifteen billion dollars. To recoup its costs, Westinghouse sold many other operations. Siemens purchased non-nuclear power generation, while other firms bought the defense electronics, office furniture company Knoll, Thermo King, its metering and load control division (to ABB), and residential security. With little remaining of the company other than its broadcasting division, Westinghouse renamed itself CBS Corporation in 1997.[citation needed]

During the 20th century, Westinghouse engineers and scientists were granted more than 28,000 U.S. government patents, the third most of any company.[5]

The company pioneered the power generation industry[6] and in the fields of long-distance power transmission and high-voltage alternating-current transmission, unveiling the technology for lighting in Great Barrington, Massachusetts.[citation needed]

The first commercial Westinghouse steam turbine driven generator, a 1,500 kW unit, began operation at Hartford Electric Light Co. in 1901. The machine, nicknamed Mary-Ann, was the first steam turbine generator to be installed by an electric utility to generate electricity in the US. George Westinghouse had based his original steam turbine design on designs licensed from the English inventor Charles Parsons. Today a large proportion of steam turbine generators operating around the world, ranging to units as large as 1,500 MW (or 1,000 times the original 1901 unit) were supplied by Westinghouse from its factories in Lester, Pennsylvania; Charlotte, North Carolina; or Hamilton, Ont. or were built overseas under Westinghouse license. Major Westinghouse licensees or joint venture partners included Mitsubishi Heavy Industries of Japan and Harbin Turbine Co. and Shanghai Electric Co. of China.

Westinghouse boasted 50,000 employees by 1900, and established a formal research and development department in 1906. While the company was expanding, it would experience internal financial difficulties. During the Panic of 1907, the Board of Directors forced George Westinghouse to take a six-month leave of absence. Westinghouse officially retired in 1909 and died several years later in 1914.

Under new leadership, Westinghouse Electric diversified its business activities in electrical technology. It acquired the Copeman Electric Stove Company in 1914 and Pittsburgh High Voltage Insulator Company in 1921. Westinghouse also moved into radio broadcasting by establishing Pittsburgh's KDKA, the first commercial radio station, and WBZ in Springfield, Massachusetts in 1921. Westinghouse expanded into the elevator business, establishing the Westinghouse Elevator Company in 1928. Throughout the decade, diversification engendered considerable growth; sales went from $43 million in 1914 to $216 million in 1929.[4]

Westinghouse produced the first operational American turbojet for the US Navy program in 1943. After many successes, the ill-fated J40 project, started soon after WWII, was abandoned in 1955 and led to Westinghouse exiting the aircraft engine business with closure of the Westinghouse Aviation Gas Turbine Division (Kansas City) in 1960.

During the late 1940s Westinghouse applied its aviation gas turbine technology and experience to develop its first industrial gas turbine. A 2,000–horsepower model W21 was installed in 1948 at the Mississippi River Fuel Corp gas compression station in Wilmar, Arkansas.[7] This was the beginning of a 50-year history of Westinghouse industrial and utility gas turbine development,[8] prior to the sale by Westinghouse of the power generation business to Siemens, AG in 1998. Evolving from the Small Steam and Gas Turbine Division formed in the early 1950s, the Westinghouse Combustion Turbine Systems Division was located in Concordville, Pennsylvania, near Philadelphia and the old Lester, Pennsylvania plant, until it was relocated to Power Generation headquarters in Orlando, Florida in 1987.

As a result of its participation in the US government's military program for nuclear energy applications (e.g. The Nuclear Navy) Westinghouse was instrumental in the development and commercialization of nuclear energy systems for electric power generation. This business currently operates as the Westinghouse Electric Company, and is owned by Toshiba of Japan. Electricite de France (EDF) a major global player in the nuclear power business, was a long-time licensee of the Westinghouse nuclear technology.

Additional major industrial products in the widespread Westinghouse portfolio included electric motors of all sizes, elevators and escalators, controls and lighting. The Large Motor Division, once headquartered in Buffalo, NY, entered a joint venture with Taiwan Electric Co. (TECO) in the 1970s and today operates as TECO-Westinghouse.[9] Much of Westinghouse's higher voltage power equipment was sold to ABB in 1989 and renamed the ABB Power T&D Company.[10]

The Westinghouse Transportation Division (est. 1894) supplied equipment and controls for many North American interurban and streetcar lines, the San Francisco Bay Area Rapid Transit (BART), Washington DC METRO (WMATA), New York City Subway (NYCT) equipment from the 1890s elevated era to the R68A in 1988, among many other heavy rail and rail transit systems and built locomotives, often in partnership with Baldwin, Lima-Hamilton as well as supplying electrical and traction equipment for Fairbanks-Morse diesel locomotives. The division designed and built Automated People Movers (APMs) at several major U.S. airports, including Tampa, Dallas-Ft. Worth and Orlando. The Transportation Division was sold to AEG of Germany (1988), which merged into a joint venture of ABB and Daimler Benz named AdTranz in 1996. Ultimately, the unit was acquired by Bombardier of Canada in 2001 and is still headquartered in Pittsburgh.[11]

Westinghouse was also a leader in the design and manufacturing of household electrical products including radios, televisions, and other audio/video equipment, and both small and large electric appliances of all kinds, from hair dryers and electric irons to clothes washers and dryers, refrigerators and air conditioning units. For many years Westinghouse was a familiar household name and favored brand. After more than 50 years, and after playing a strong No. 2 to rival General Electric for most of that time, Westinghouse decided to exit the appliance business in the mid- 1970s. White-Westinghouse was formed when White Consolidated acquired the Westinghouse appliance unit in 1975.

There have been a number of Westinghouse-related environmental incidents in the US. Below is a short list of these. All of these are chemical pollution incidents; none of them involve nuclear reactors or nuclear pollution. 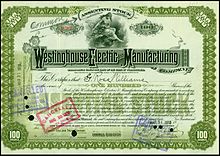 Share of the Westinghouse Electric and Manufacturing Company, issued March 31, 1910