The Western Canadian Baseball League (WCBL) is a collegiate summer baseball league based in Saskatchewan and Alberta that descends from leagues dating to 1931.

The league can trace its roots back to 1931, via its predecessors. The Southern Baseball League existed from 1931 to 1974. The Northern Saskatchewan Baseball League existed from 1959 to 1974. The Saskatchewan Major Baseball League (SMBL) was formed in 1975 as a combination of the two predecessors. Three teams from each former league entered the new loop — the Eston Ramblers, Saskatoon Royals, and Unity Cardinals from the north and Moose Jaw Devons, Regina Red Sox, and Swift Current Indians from the south.[3][4] The name was changed to the Western Major Baseball League in 2000 to reflect more teams playing in Alberta, as well as future expansion to British Columbia. In June 2018 it was announced that the league would adopt its current name for 2019 and beyond.[5]

As of 2018[update], WCBL Membership consists of 12 teams in two divisions. The top four teams in each division qualify for the post-season.

The Yorkton and Melville franchises took a leave of absence for the 2020 season.[6] However, like other leagues worldwide, the 2020 season was not played due to coronavirus.

Cranbrook, British Columbia was granted a conditional expansion team in 2011 and was to begin play after building a new stadium.[7][8] As of 2018, these plans appear to have stalled.

Sylvan Lake was working towards a WCBL team in September, 2019. Under the current concept, a 2,200-seat ballpark would be built as part of Sylvan Lake’s Pogadl Park development and house a WCBL expansion team backed by the ownership group Hard 4 Sports and Entertainment. The earliest that the ballpark would be completed is 2021, with the WCBL squad potentially beginning play that season as part of a 25-year lease agreement.[9] Plans for a 2021 launch were officially announced November 1, 2019.[10] Branding as the Sylvan Lake Gulls was announced in March 2020.[11]

Spruce Grove is also in preliminary stages of ballpark construction. The city could be the site of a new team, or the relocation of the Edmonton Prospects.[12] In May 2020, Prospects ownership confirmed that the team would be leaving Edmonton for Spruce Grove by 2022.[13] 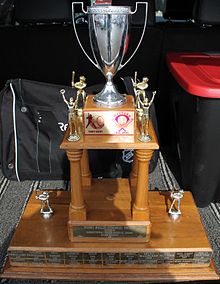 Saskatchewan Territorial (1895–1905) and Provincial (1906–present) champions have been decided by an annual tournament.[4] In 1967 the first major division was added to the tournament,[14] and the award was named in memory of Harry Hallis. From 1967 until 1974 the name of this provincial champion was added to the trophy. In 1975 when the Saskatchewan Major Baseball League was formed, this trophy continued to be awarded to the SMBL champions, and now the WCBL champions.