Political situation in Europe during the Cold War

The Western Bloc, also known as the Capitalist Bloc, was a coalition of countries that were allied with the United States, a member of NATO, and/or opposed the Soviet Union and the Warsaw Pact during the Cold War. The latter were referred to as the Eastern Bloc. The governments and press of the Western Bloc were more inclined to refer to themselves as the "Free World" or the "Western world", whereas the Eastern Bloc was often called the "Communist world or Second world".

Since the end of the Cold War, until recently, further escalation between China and Russia became tense since the NATO bombing of Yugoslavia in 1999, such as the conflicts in the Middle East (particularly in Iran, Syria and Yemen), Venezuela and Ukraine.[1]

Other NATO-affiliated states and partners 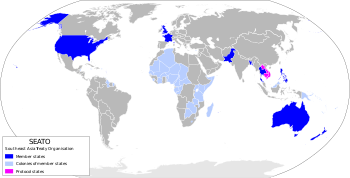