West Prussia was notable for its ethnic and religious diversity due to immigration and cultural changes, with the population becoming mixed over the centuries. Since the early Middle Ages the region was inhabited by numerous Slavic and Baltic peoples, such as Pomeranians in the Pomerelia region, Old Prussians and Masovians in Kulmerland, and Pomesanians east of the Vistula River. Later Germans followed. Germans were also the largest group in West Prussia since the middle of the 19th century until its dissolution in 1922, with large numbers of Kashubians, Poles, Mennonites, and Jews also settling in the region. 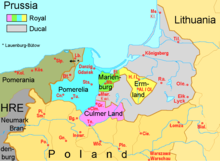 Royal and Ducal Prussia in 1525

The fortress Ordensburg Marienburg in Malbork, Poland. Founded in 1274 by the Teutonic Order on the river Nogat, it is the world’s largest brick castle. After 1466 it served as one of several royal residences of the Polish kings, fulfilling this function until 1772.

In the Thirteen Years' War (1454–1466), the towns of the Prussian Confederation in Pomerelia and the adjacent Prussian region east of the Vistula River rebelled against the rule of the Teutonic Knights and sought the assistance of King Casimir IV Jagiellon of Poland. By the Second Peace of Thorn in 1466, Pomerelia and the Prussian Culm (Chełmno) and Marienburg (Malbork) lands as well as the autonomous Prince-Bishopric of Warmia (Ermland) became the Polish province of Royal Prussia, which received special rights, especially in Danzig (Gdańsk). The province became a Land of the Polish Crown within the Polish–Lithuanian Commonwealth (Rzeczpospolita) by the 1569 Union of Lublin. Parts of the local population objected to the Union as being a biased and unlawful interpretation of the incorporation privilege of 1454.[1]

East Prussia around Königsberg, on the other hand, remained with the State of the Teutonic Knights, who were reduced to vassals of the Polish kings. Their territory was secularised to the Duchy of Prussia according to the 1525 Treaty of Kraków. Ruled in personal union with the Imperial Margraviate of Brandenburg from 1618, the Hohenzollern rulers of Brandenburg-Prussia were able to remove the Polish suzerainty by the 1657 Treaty of Wehlau. This development turned out to be fatal to the Polish monarchy, as the two parts of the rising Kingdom of Prussia were separated by Polish land.

In the 1772 First Partition of Poland the Prussian king Frederick the Great took the occasion to annex most of Royal Prussia. The addition gave Prussia a land connection between the Province of Pomerania and East Prussia, cutting off the Polish access to the Baltic Sea and rendering East Prussia more readily defensible in the event of war with the Russian Empire. The annexed voivodeships of Pomerania (i.e. Pomerelia) except for the City of Danzig, Marienburg (Polish: Malbork) and Kulm (Polish: Chełmno) (except for Thorn; Polish: Toruń) were incorporated into the Province of West Prussia the following year, while Ermland (Polish: Warmia) became part of the Province of East Prussia. Further annexed areas of Greater Poland and Kuyavia in the south formed the Netze District. The Partition Sejm ratified the cession on 30 September 1773. Thereafter Frederick styled himself "King of Prussia" rather than "King in Prussia."

The Polish administrative and legal code was replaced by the Prussian system, and 750 schools were built from 1772-1775.[2] Both Protestant and Roman Catholic teachers taught in West Prussia, and teachers and administrators were encouraged to be able to speak both German and Polish. Frederick II of Prussia also advised his successors to learn Polish, a policy followed by the Hohenzollern dynasty until Frederick III decided not to let William II learn Polish.[2] Despite this, Frederick II (Frederick the Great) looked askance upon many of his new citizens. In a letter from 1735, he calls them "dirty" and "vile apes"[3] He had nothing but contempt for the szlachta, the numerous Polish nobility, and wrote that Poland had "the worst government in Europe with the exception of Ottoman Empire".[4] He considered West Prussia less civilized than Colonial Canada[5] and compared the Poles to the Iroquois.[4] In a letter to his brother Henry, Frederick wrote about the province that "it is a very good and advantageous acquisition, both from a financial and a political point of view. In order to excite less jealousy I tell everyone that on my travels I have seen just sand, pine trees, heath land and Jews. Despite that there is a lot of work to be done; there is no order, and no planning and the towns are in a lamentable condition."[6] Frederick invited German immigrants to redevelop the province,.[2][7] Many German officials also regarded the Poles with contempt.[5] According to the Polish historian Jerzy Surdykowski, Frederick the Great introduced 300,000 German colonists.[8] According to Christopher Clark, 54 percent of the annexed area's and 75 percent of the urban population were German-speaking Protestants.[9] Further Polish areas were annexed in the Second Partition of Poland in 1793, now including the cities of Danzig (Gdańsk) and Thorn (Toruń). Some of the areas of Greater Poland annexed in 1772 that formed the Netze District were added to West Prussia in 1793 as well.

After the defeat of Prussia by the Napoleonic French Empire at the 1806 Battle of Jena-Auerstedt, West Prussia lost its southern territory in the vicinity of Thorn and Culm (Chełmno) to the short-lived Duchy of Warsaw, it also lost Danzig, which was a Free City from 1807 until 1814. After the final defeat of Napoleon in 1815, Danzig, Kulm, and Thorn were returned to West Prussia by resolution of the Vienna Congress.

In 1815, the province was administratively subdivided into the Regierungsbezirke Danzig and Marienwerder. From 1824-1878 West Prussia was combined with East Prussia to form the Province of Prussia, after which they were reestablished as separate provinces. In 1840, King Frederick William IV of Prussia sought to reconcile the state with the Catholic Church and the kingdom's Polish subjects by granting amnesty to imprisoned Polish bishops and re-establishing Polish instruction in schools in districts having Polish majorities. However, after the region became part of the German Empire in 1871 during the unification of Germany, it was subjected to measures aimed at Germanization of Polish-speaking areas. The Polish historian Andrzej Chwalba cites Germanization measures that included:

In the German census of 1910, the population of West Prussia was put at 1,703,474, of whom around 64 percent listed their first language as German, 28 percent Polish and 7 percent Kashubian. According to Polish authors the real share of Poles and Kashubians was 43% (rather than 35.5% as in official figures), but many of them were counted as Catholic Germans by Prussian census clerks.[11]

The region was invaded, then included in the Reichsgau Danzig-West Prussia within Nazi Germany during World War II and settled with 130,000 German colonists,[13] while between 120,000 and 170,000 Poles and Jews were removed by the Germans through expulsion, massacres, enslavement or killed in extermination camps.[14] As in all other areas, Poles and Jews were classified as "Untermenschen" by the German state, with their fate being slavery and extermination. Later in the war, many West Prussian Germans fled westward as the Red Army advanced on the Eastern Front. All of the areas occupied by Nazis were restored to Poland according to the post-war Potsdam Agreement in 1945, along with further neighbouring areas of former Nazi Germany. The vast majority of the remaining German population of the region which had not fled before was subsequently expelled westward. Many German civilians were deported to labor camps like Vorkuta in the Soviet Union, where a large number of them perished or were later reported missing. In 1949, the refugees established the non-profit Landsmannschaft Westpreußen to represent West Prussians in the Federal Republic of Germany. 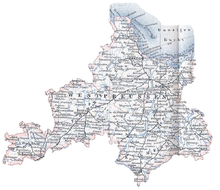 Map of West Prussia and the Bay of Danzig in 1896 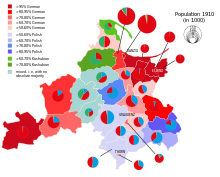 Administrative divisions and languages in West Prussia according to the German census 1910. The numbers include German military stationed in the region, as well as civil clerks and officials, were settled as part of German state's official policy of Germanisation of Polish areas[10][18]
Legend for the districts:
German language
Polish language
Kashubian language
others or bilingual

According to the German census of 1910, in areas that became Polish after 1918, 42 percent of the populace were Germans (including German military, officials and colonists), while the Polish census of 1921 found 19 percent of Germans in the same territory.[22]

Note: Prussian provinces were subdivided into districts called Kreise (singular Kreis, abbreviated Kr.). Cities would have their own Stadtkreis (urban district) and the surrounding rural area would be named for the city, but referred to as a Landkreis (rural district).

Population according to the German census 1905: