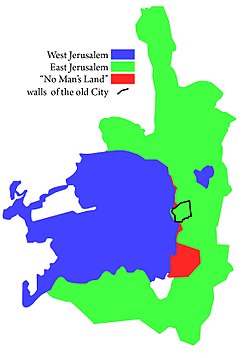 West Jerusalem or Western Jerusalem refers to the section of Jerusalem that remained under Israeli control after the 1948 Arab–Israeli War, whose ceasefire lines delimited the boundary with the rest of the city, which was then under Jordanian control.[1] A number of western countries such as the United Kingdom acknowledge de facto Israeli authority, but withhold de jure recognition.[2][3] Israel's claim of sovereignty over West Jerusalem is more widely accepted than its claim over East Jerusalem.[4] 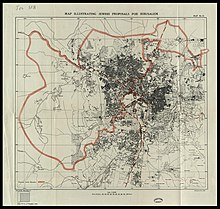 Map illustrating Jewish proposals for partition of Jerusalem, presented to the 1938 Woodhead Commission.

Prior to the 1948 Palestine war, the area of West Jerusalem held one of the wealthiest Arab communities, numbering some 28,000 people, in the region. By the end of hostilities, only approximately 750 non-Jews remained in the area's Arab sector, mostly Greeks in the “Greek colony” neighborhood.[5] Following the war, Jerusalem was divided into two parts: the western portion, from which it is estimated roughly 30,000 Arabs had fled or been evicted, came under Israeli rule, while East Jerusalem came under Jordanian rule[1][6][citation needed] and was populated mainly by Palestinian Muslims and Christians. The Jordanians expelled a Jewish community of some 1,500 from the Old City.[7]

After widespread looting, Israeli institutions managed to gather in around 30,000 books, mostly in Arabic, dealing with Islamic law, Qur’anic exegesis and translations of European literature, together with thousands of works from the holdings of churches and schools. Many were taken from the homes of Palestinian writers and scholars in Qatamon, Bak'a and Musrara.[8] 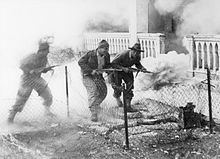 The United Nations Partition Plan for Palestine planned a “corpus separatum” for Jerusalem and its environs as an international city.[9]

Arabs living in such western Jerusalem neighbourhoods as Katamon or Malha were forced to leave; the same fate befell Jews in the eastern areas, including the Old City of Jerusalem and Silwan. Almost 33% of the land in West Jerusalem in the pre-mandate period had been owned by Palestinians, a fact which made it hard for the evicted Palestinians to accept Israeli control in the West. The Knesset (Israeli Parliament) passed laws to transfer this Arab land to Israeli Jewish organizations.[10]

The only eastern area of the city that remained in Israeli hands throughout the 19 years of Jordanian rule was Mount Scopus, where the Hebrew University of Jerusalem is located, which formed an enclave during that period and therefore is not considered part of East Jerusalem.[citation needed]

During the Six-Day War in June 1967, Israel captured the eastern side of the city[15] and the whole West Bank. Over the following years, their control remained tenuous, the international community refusing to recognise their authority and the Israelis themselves not feeling secure.[15]

In 1980, the Israeli government annexed East Jerusalem and reunified the city but the international community disputed this.[1] The population of Jerusalem has largely remained segregated along the city's historical east/west division.[16] The larger city contains two populations that are "almost completely economically and politically segregated... each interacting with its separate central business district", supporting analysis that the city has retained a duocentric, as opposed to the traditional monocentric, structure.[16]