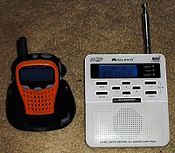 Two types of weather radio receivers; the common Midland home weather radio (model WR-100) to the right is often the most popular and known unit sold in the United States, while the orange Oregon Scientific model on the left is portable and water-resistant for outdoor use.

A weather radio is a specialized radio receiver that is designed to receive a public broadcast service, typically from government-owned radio stations, dedicated to airing weather reports on a continual basis, with the routine weather reports being interrupted by emergency weather reports whenever needed. Weather radios are typically equipped with a standby alerting function—if the radio is muted or tuned to another band and a severe weather bulletin is transmitted, it can automatically sound an alarm and/or switch to a pre-tuned weather channel for emergency weather information.

Weather radio services may also broadcast non-weather-related emergency information, such as in the event of a natural disaster, a child abduction alert, or a terrorist attack. They generally broadcast in a pre-allocated very high frequency (VHF) range using FM. Usually a radio scanner or a dedicated weather radio receiver is needed for listening, although in some locations a weather radio broadcast may be re-transmitted on an AM or FM broadcast station, on terrestrial television stations, or local public, educational, and government access (PEG) cable TV channels or during weather or other emergencies.

Weather radios are generally sold in two varieties: home (stationary) or portable use. Portable models commonly offer specialized features that make them more useful in case of an emergency. Some models use crank power, in addition to mains electricity and batteries, in case of a power outage. 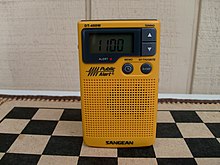 Smaller hand-held weather receivers generally do not support the SAME alert type encoding, but allow hikers and other explorers to listen to weather reports without packing a heavy and bulky base station radio. Some models have a built-in flashlight and can double as a cellphone charger. Some also serve as a more general emergency radio and may include multiband and two-way communication capability. "Scanner" radios designed to continuously monitor the VHF-FM public service band are already able to receive weather channels.

Besides SAME alerting capability, modern weather radio receivers, especially those that are compliant with CTA standard 2009-B, may include visual alerting elements (e.g., multicolored LED indicator lights) and allow for the use of external devices (e.g., pillow vibrators, bed shakers, strobe lights, and loud sirens, which attach via an accessory port) to alert those who are deaf or hearing impaired.

Both private and commercial seagoing vessels need accurate weather reports, in order to avoid storms that might damage or capsize the vessel, or make paying passengers uncomfortable. One such service is Navtex, which is a low-frequency facsimile radio service.

Other channel designations such as WX1 through WX7 "have no special significance but are often designated this way in consumer equipment" and "other channel numbering schemes are also prevalent/possible" according to NOAA and USCG.[11][12] Ordering channels by when they were established (WX1, WX2, …) is "becoming less 'popular' over time than a numerical ordering of channels."[13] Weather radios may list stations in the order of their WX#, or by a "Preset Channel" number 1 thru 7 in ascending frequency order.[14][15][16]

All stations in United States, Canada, and Bermuda transmit a 1050 Hz attention tone immediately before issuing a watch or warning, and this alone serves to activate the alarm feature on many older or basic alerting radios.

All U.S. and newer Canadian stations transmit WRSAME codes a few seconds before the 1050 Hz attention tone that allow more advanced receivers to respond only for certain warnings that carry a specific code for the local area. SAME codes are defined for counties, parishes, territories, or marine zones, and are set using preassigned six-digit FIPS county codes (in the U.S.) or CLC codes (in Canada). The SAME code protocol also includes an end-of-message (EOM) tone (three short data bursts of the binary 10101011 calibration then "NNNN", which some radios will use to mute the speaker after the alert broadcast has been completed.[21][22]

NOAA Weather Radio (NWR; also known as NOAA Weather Radio All Hazards) is an automated 24-hour network of more than 1000 radio stations[23] in the United States that broadcast weather information directly from a nearby National Weather Service office. A complete broadcast cycle lasts about 3 to 8 minutes long, featuring weather forecasts and local observations, but is interrupted when severe weather advisories, warnings, or watches are issued. It occasionally broadcasts other non-weather related events such as national security statements, natural disaster information, environmental and public safety statements (such as an AMBER Alert) sourced from the Federal Communications Commission's (FCC) Emergency Alert System. Weather Underground discontinued live streams of NWR broadcasts in 2017.[24]

In Canada, Weatheradio Canada transmits in both official languages (English and French) from 230 sites across Canada. Canadian broadcasts are also transmitted on travelers' information stations on AM and FM, especially near national parks.[citation needed]

Bermuda Radio (call-sign ZBR) is a weather radio station in Bermuda working under the Government of Bermuda.

Mexico has since launched its own weather radio system, SARMEX (Sistema De Alerta De Riesgos Mexicano, or Mexican Hazard Warning System) for coverage of its cities,[27] which also implements the Mexican Seismic Warning System. Some Mexican alert radios also support activation by a two-tone alert for another type of risk warning.[28]

The weather radio band is part of the marine VHF radio band reserved for governmental services.[citation needed] However, most standard AM and FM broadcast radio stations provide some sort of private weather forecasting, either through relaying public-domain National Weather Service forecasts, partnering with a meteorologist from a local television station (or using a meteorologist hired by the station, common when a radio station is a sister station of their TV counterpart or has a news and forecast-sharing agreement), affiliating with a commercial weather service company, or (in the most brazen cases) copying a commercial service's public forecasts without payment or permission. (The first option is not available, or at least legally, in Canada, where Environment Canada's forecasts are under crown copyright.)

Microsoft's MSN Direct was a popular data service that included weather forecasting sent over US FM radio signals from 2004 to 2012. It was used by Microsoft Spot watches and Oregon Scientific clocks.[30]