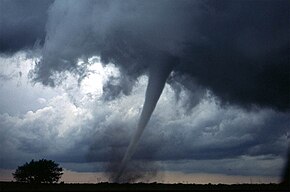 A tornado near Anadarko, Oklahoma during the 1999 Oklahoma tornado outbreak. Weather researchers may aspire to eliminate or control dangerous types of weather such as this.

A popular belief in northern Europe that shooting prevents hail caused many agricultural towns to fire cannons without ammunition. Veterans of the Seven Years' War, Napoleonic wars, and the American Civil War reported that rain fell after every large battle. After their stories were collected in War and Weather, the United States Department of War in the late 19th century purchased $9,000 of gunpowder and explosives to detonate them in Texas. The results of the test, supervised by Robert Dyrenforth, were inconclusive.[2]

Wilhelm Reich performed cloudbusting experiments in the 1950s, the results of which are controversial and not widely accepted by mainstream science.

In November 1955, the Thailand Royal Rainmaking Project (Thai: โครงการฝนหลวง) was initiated by King Bhumibol Adulyadej. He discovered that many areas faced the problem of drought. Over 82 percent of Thai agricultural land relied on rainfall. Thai farmers were not able to grow crops for lack of water. The royal rainmaking project debuted on 20 July 1969 at his behest, when the first rainmaking attempt was made at Khao Yai National Park. Dry ice flakes were scattered over clouds. Reportedly, some rainfall resulted. In 1971, the government established the Artificial Rainmaking Research and Development Project within the Thai Ministry of Agriculture and Cooperatives[3][circular reference]

In January 2011, several newspapers and magazines, including the UK's Sunday Times and Arabian Business, reported that scientists backed by the government of Abu Dhabi, the capital of the United Arab Emirates, had created over 50 artificial rainstorms between July and August 2010 near Al Ain, a city which lies close to the country's border with Oman and is the second-largest city in the Abu Dhabi Emirate. The artificial rainstorms were said to have sometimes caused hail, gales and thunderstorms, baffling local residents.[4] 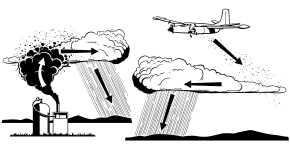 Cloud seeding is a common technique to enhance precipitation. Cloud seeding entails spraying small particles, such as silver iodide, onto clouds to affect their development, usually with the goal of increasing precipitation. Cloud seeding only works to the extent that there is already water vapor present in the air. Critics generally contend that claimed successes occur in conditions which were going to lead to rain anyway. It is used in a variety of drought-prone countries, including the United States, China, India, and Russia. In China there is a perceived dependency upon it in dry regions, and there is a strong suspicion it is used to "wash the air" in dry and heavily polluted places, such as Beijing.[5] In mountainous areas of the United States such as the Rocky Mountains and Sierra Nevada,[6] cloud seeding has been employed since the 1950s.

"China is launching the world's largest weather-control machine, with the ability to modify the weather in an area similar to the size of Alaska. China has never shied away from doing things on a massive scale and this is yet another example of the Chinese government working on an unprecedented scale".[7] China estimates it to produce up to 10 billion cubic meters of rainfall each year. For comparison, more than 30 countries get less than 10 billion cubic meters of precipitation per year.[8]

Saudi Arabia has been cloud seeding since the 2000s and aims to increase rainfall by 15-30% per year. The material used is: potassium chloride, sodium chloride, magnesium, and other materials.[9]

"In the first three months of 2017, the country carried out 101 cloud seeding operations, compared to 77 over the same period in 2014, according to Arabian Business, who wrote that during March last year when the country had two months of “unusually wet weather” and more rainfall was recorded in Dubai and Al Ain than when records began in 1977."[10]

Without having adequate systems to handle weather modification may have disastrous consequences. "In the city of Jeddah in Western Saudi Arabia was damaged by floods in 2009 that reportedly killed more than 100 people; igniting questions of why the country doesn’t have effective drainage systems in place."[11]

The U.S. National Library of Medicine notes that the silver iodide has no known “ill effects” on people, although people’s “hands may have remained yellowed for weeks” after being exposed to it.[12] 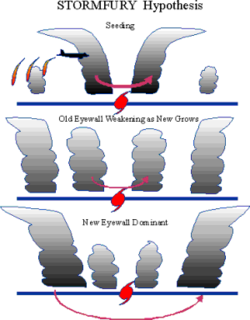 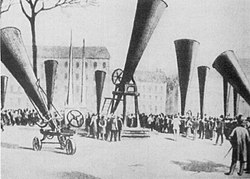 Project Stormfury was an attempt to weaken tropical cyclones by flying aircraft into storms and seeding the eyewall with silver iodide. The project was run by the United States Government from 1962 to 1983. A similar project using soot was run in 1958, with inconclusive results.[13] Various methods have been proposed to reduce the harmful effects of hurricanes. Moshe Alamaro of the Massachusetts Institute of Technology[14] proposed using barges with upward-pointing jet engines to trigger smaller storms to disrupt the progress of an incoming hurricane; critics doubt the jets would be powerful enough to make any noticeable difference.[13]

Alexandre Chorin of the University of California, Berkeley, proposed dropping large amounts of environmentally friendly oils on the sea surface to prevent droplet formation.[15] Experiments by Kerry Emanuel[16] of MIT in 2002 suggested that hurricane-force winds would disrupt the oil slick, making it ineffective.[13] Other scientists disputed the factual basis of the theoretical mechanism assumed by this approach.[15]

The Florida company Dyn-O-Mat and its CEO, Peter Cordani, proposed the use of a patented product it developed, called Dyn-O-Gel, to reduce the strength of hurricanes. The substance is a polymer in powder form (a polyacrylic acid derivative) which reportedly has the ability to absorb 1,500 times its own weight in water. The theory is that the polymer is dropped into clouds to remove their moisture and force the storm to use more energy to move the heavier water drops, thus helping to dissipate the storm. When the gel reaches the ocean surface, it is reportedly dissolved. Peter Cordani teamed up with Mark Daniels and Victor Miller, the owners of a government contracting aviation firm AeroGroup which operated ex-military aircraft commercially. Using a high altitude B-57 Bomber, AeroGroup tested the substance dropping 9,000 pounds from the B-57 aircraft's large bomb bay disbursing it into a large thunderstorm cell just off the east coast of Florida. The tests were documented on film and made international news showing the storms were successfully removed on monitored Doppler radar. In 2003, the program was shut down because of political pressure through NOAA.[17] Numerical simulations performed by NOAA showed however that it would not be a practical solution for large systems like a tropical cyclone.[18]

Hail cannons have been used by some farmers since the 19th century in an attempt to ward off hail, but there is no reliable scientific evidence to confirm their effectiveness. Another new anti-hurricane technology[19] is a method for the reduction of tropical cyclones' destructive force – pumping sea water into and diffusing it in the wind at the bottom of such tropical cyclone in its eye wall.

Later ideas (2017) include laser inversion along the same lines as laser cooling (normally used at cryogenic temperatures) but intended to cool the top 1mm of water. If enough power was used then it might be enough combined with computer modeling to form an interference pattern able to inhibit a hurricane or significantly reduce its strength by depriving it of heat energy.[22][23]

Operation Popeye was a highly classified operation run by the US military in 1967-1972.[24] The purpose was to prolong Monsoon in Southeast Asia. The overwhelming precipitation successfully disrupted the tactical logistics of Vietnamese army. Operation Popeye is believed as the first successful practice of weather modification technology in warfare. After it was unveiled, weather modification in warfare was banned by the Environmental Modification Convention (ENMOD).[25]

In "Benign Weather Modification" published March 1997, Air Force Major Barry B. Coble superficially documents the existence of weather modification science where he traces the developments that have occurred, notably, in the hands of the Pentagon and CIA's staunchest ideological enemies.

In the 1990s a directive from the chief of staff of the Air Force Ronald R. Fogleman was issued to examine the concepts, capabilities, and technologies the United States would require to remain the dominant air and space force in the future.

US and Canada agreement

In 1975, the US and Canada entered into an agreement under the auspices of the United Nations for the exchange of information on weather modification activity.[28]

Weather modification, particularly hostile weather warfare, was addressed by the "United Nations General Assembly Resolution 31/72, TIAS 9614 Convention[29] on the Prohibition of Military or Any Other Hostile Use of Environmental Modification Techniques." The Convention was signed in Geneva on May 18, 1977; entered into force on October 5, 1978; ratified by U.S. President Jimmy Carter on December 13, 1979; and the U.S. ratification deposited at New York January 17, 1980.[30]

US National Oceanic and Atmospheric Administration

In the US, the National Oceanic and Atmospheric Administration keeps records of weather modification projects on behalf of the Secretary of Commerce, under authority of Public Law 92-205, 15 USC § 330B, enacted in 1971.[31]

In religion and mythology 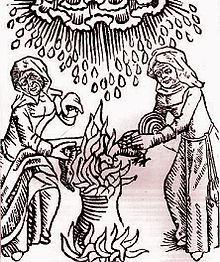 Witches concoct a brew to summon a hailstorm.

Magical and religious practices to control the weather are attested in a variety of cultures. In ancient India it is said that yajna or vedic rituals of chanting mantras and offering were performed by rishis to bring sudden bursts of rain fall in rain starved regions. Some Indigenous Americans, like some Europeans, had rituals which they believed could induce rain. The Finnish people, on the other hand, were believed by others to be able to control weather. As a result, Vikings refused to take Finns on their oceangoing raids. Remnants of this superstition lasted into the twentieth century, with some ship crews being reluctant to accept Finnish sailors.

The early modern era saw people observe that during battles the firing of cannons and other firearms often initiated precipitation.

In Greek mythology, Iphigenia was offered as a human sacrifice to appease the wrath of the goddess Artemis, who had becalmed the Achaean fleet at Aulis at the beginning of the Trojan War. In Homer's Odyssey, Aeolus, keeper of the winds, bestowed Odysseus and his crew with a gift of the four winds in a bag. However, the sailors opened the bag while Odysseus slept, looking for booty (money), and as a result were blown off course by the resulting gale.[36] In ancient Rome, the lapis manalis was a sacred stone kept outside the walls of Rome in a temple of Mars. When Rome suffered from drought, the stone was dragged into the city.[37] The Berwick witches of Scotland were found guilty of using black magic to summon storms to murder King James VI of Scotland by seeking to sink the ship upon which he travelled.[38] Scandinavian witches allegedly claimed to sell the wind in bags or magically confined into wooden staves; they sold the bags to seamen who could release them when becalmed.[39] In various towns of Navarre, prayers petitioned Saint Peter to grant rain in time of drought. If the rain was not forthcoming, the statue of St Peter was removed from the church and tossed into a river.

In the Hebrew Bible, it is recorded that Elijah in the way of judgement, told King Ahab that neither dew nor rain would fall until Elijah called for it.[40] It is further recorded that the ensuing drought lasted for a period of 3.5 years at which time Elijah called the rains to come again and the land was restored.[41] The New Testament records Jesus Christ controlling a storm by speaking to it.[42]

In Islam, Salat Al-Istisqa’ (Prayer for Rain) is taken as recourse when seeking rain from God during times of drought.[43]

Weather modification, along with climate engineering, is a recurring theme in conspiracy theories. The chemtrail conspiracy theory supposes that jet contrails are chemically altered to modify the weather and other phenomena. Other theories attempt to implicate scientific infrastructure such as the High-frequency Active Auroral Research Program or individuals such as the Rothschild family.

Frank Herbert's Dune series features weather control technology, mainly in the planets of Arrakis, where the technology is used to assure for privacy from observation and in order to hide from the Imperium their true population and their plans to terraform the planet, and in Chapterhouse, where the Bene Gesserit intend to turn the planet into a desert.