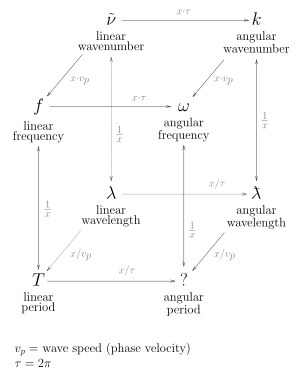 Diagram illustrating the relationship between the wavenumber and the other properties of harmonic waves.

Wavenumber can be used to specify quantities other than spatial frequency. In optical spectroscopy, it is often used as a unit of temporal frequency assuming a certain speed of light.

Wavenumber, as used in spectroscopy and most chemistry fields, is defined as the number of wavelengths per unit distance, typically centimeters (cm−1):

where λ is the wavelength. It is sometimes called the "spectroscopic wavenumber".[1] It equals the spatial frequency.

In theoretical physics, a wave number defined as the number of radians per unit distance, sometimes called "angular wavenumber", is more often used:[2]

When wavenumber is represented by the symbol ν, a frequency is still being represented, albeit indirectly. As described in the spectroscopy section, this is done through the relationship

, where νs is a frequency in hertz. This is done for convenience as frequencies tend to be very large.[3]

It has dimensions of reciprocal length, so its SI unit is the reciprocal of meters (m−1). In spectroscopy it is usual to give wavenumbers in cgs unit (i.e., reciprocal centimeters; cm−1); in this context, the wavenumber was formerly called the kayser, after Heinrich Kayser (some older scientific papers used this unit, abbreviated as K, where 1 K = 1 cm−1).[4] The angular wavenumber may be expressed in radians per meter (rad⋅m−1), or as above, since the radian is dimensionless.

For electromagnetic radiation in vacuum, wavenumber is proportional to frequency and to photon energy. Because of this, wavenumbers are used as a unit of energy in spectroscopy.

and refraction index n as:[5]

where k0 is the free-space wavenumber, as above. The imaginary part of the wavenumber expresses attenuation per unit distance and is useful in the study of exponentially decaying evanescent fields.

Here we assume that the wave is regular in the sense that the different quantities describing the wave such as the wavelength, frequency and thus the wavenumber are constants. See wavepacket for discussion of the case when these quantities are not constant.

In general, the angular wavenumber k (i.e. the magnitude of the wave vector) is given by

For the special case of an electromagnetic wave in a vacuum, in which the wave propagates at the speed of light, k is given by:

where E is the energy of the wave, ħ is the reduced Planck constant, and c is the speed of light in a vacuum.

For the special case of a matter wave, for example an electron wave, in the non-relativistic approximation (in the case of a free particle, that is, the particle has no potential energy):

Wavenumber is also used to define the group velocity.

often refers to a frequency which has been divided by the speed of light in vacuum:

which remains essentially the same in air, and so the spectroscopic wavenumber is directly related to the angles of light scattered from diffraction gratings and the distance between fringes in interferometers, when those instruments are operated in air or vacuum. Such wavenumbers were first used in the calculations of Johannes Rydberg in the 1880s. The Rydberg–Ritz combination principle of 1908 was also formulated in terms of wavenumbers. A few years later spectral lines could be understood in quantum theory as differences between energy levels, energy being proportional to wavenumber, or frequency. However, spectroscopic data kept being tabulated in terms of spectroscopic wavenumber rather than frequency or energy.

For example, the spectroscopic wavenumbers of the emission spectrum of atomic hydrogen are given by the Rydberg formula:

where R is the Rydberg constant, and ni and nf are the principal quantum numbers of the initial and final levels respectively (ni is greater than nf for emission).

A spectroscopic wavenumber can be converted into energy per photon E by Planck's relation:

It can also be converted into wavelength of light:

where n is the refractive index of the medium. Note that the wavelength of light changes as it passes through different media, however, the spectroscopic wavenumber (i.e., frequency) remains constant.

, so often that such spatial frequencies are stated by some authors "in wavenumbers",[6] incorrectly transferring the name of the quantity to the CGS unit cm−1 itself.[7]

A wavenumber in inverse cm can be converted to a frequency in GHz by multiplying by 29.9792458 (the speed of light in centimeters per nanosecond).[8]