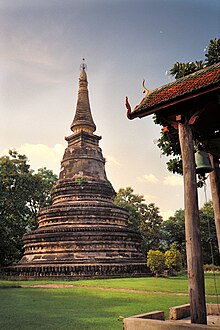 The Chedi of Wat Umong

Wat Umong is located against the mountains of Doi Suthep and is about 1 km south of the main campus of Chiang Mai University. The wat occupies a tranquil setting and a small open zoo is stationed behind it.[1]

The temple was built in 1297 by King Manglai of the Lan Na dynasty.[1] Of particular interest is a replica of the Ashok Pillar similar to the one at Vaishali with four lions and a wheel at the base and an additional larger wheel on top that acts as an umbrella for the lions.[2] A similar pillar is also available at Sarnath Museum. The four lion head is adopted as the National Emblem of India. 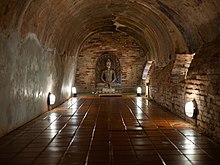 End of a tunnel at Wat Umong 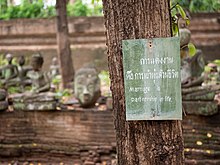 The entire Wat Umong complex consists of 37.5 rai (15 acres) of wooded grounds. You can feed the fish, turtles, and ducks in a large pond. "Talking trees" have words of wisdom in Thai and English. The wat is famous for its ancient tunnels and large chedi. There are tunnels with Buddhist images below the chedi which can be easily explored. These tunnels were supposedly built by the King and painted with bush scenes so they could keep a famous but mentally deranged monk within the grounds of the monastery as he had a habit of just wandering off into the bush for days on end. Signs (proverbs) written in English and Thai hang from the trees on footpaths leading to the small lake where fish, pigeons, and turtles can be fed.

Other attractions include a Buddha field of broken sculpture, a fasting Bodhisattva, a Spiritual Theatre of paintings similar to those at Suan Mokkh, reproductions of ancient Buddhist sculpture of India, and a library-museum. This last building offers many books on Buddhism and other philosophies as well as a collection of historic objects and Buddhist art.[3]

Wat Umong is unique in that the resident monks live in a very natural setting, and occasionally feed the deer that live in the area. It also is possible to practice meditation at Wat Umong and to learn from the monks.[4][citation needed][original research?]

Note: There is a temple with a similar name within the old city moat of Chiang Mai, whose complete name is "Wat Umong Maha Thera Chan".[5]