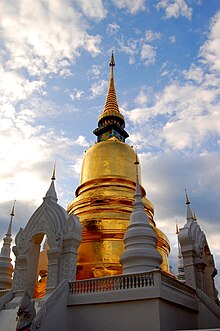 Wat Suan Dok (Thai: วัดสวนดอก, pronounced [wát sǔan dɔ̀ːk], roughly "flower garden temple"), also known as Wat Buppharam (วัดบุปผาราม, [wát bùp.pʰǎː.rāːm]) is a Buddhist temple (Wat) in Chiang Mai, northern Thailand. It is a Royal Temple of the Third Class. The temple is on Suthep Road, approximately one kilometre west of Suan Dok gate at the west side of the moat.

The Chiang Mai campus of the Buddhist Mahachulalongkornrajavidyalaya University is housed within the temple compound. 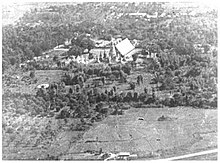 Wat Suan Dok in 1886 photographed from above

Wat Suan Dok was founded by King Kue Na of Lanna for the monk Sumana Thera in the year 1370 CE. The temple was built in the centre of Wiang Suan Dok (Thai: เวียงสวนดอก), a walled settlement (Wiang, Thai: เวียง) of the Lawa people older than Chiang Mai itself. The outlines of the fortifications can clearly be traced on satellite images, and remains of some of the earthen walls can still be seen north of Suthep road. King Kue Na's flower garden (Thai: สวนดอกไม้, suan dok mai), which was located here, lent the temple its original name: Wat Buppharam (Thai: วัดบุปผาราม), or Wat Suan Dok Mai (Thai: วัดสวนดอกไม้) for short.

According to legend, Maha Sumana Thera, a monk from the Sukhothai Kingdom, after having had a vision discovered a relic of the Buddha which, also according to the same vision, was to be housed in Chiang Mai. Sumana Thera stayed two rainy seasons at Wat Phra Yuen just outside Lamphun at the invitation of King Kue Na while the latter had Wat Buppharam Dok Mai built. When the moment arrived for the relic to be housed in the newly built temple, it miraculously duplicated itself. One of the relics was housed, as intended, in a shrine inside Wat Buppharam Dok Mai, while the other relic was placed on the back of a white elephant which then climbed up Doi Suthep, the mountain directly west of Chiang Mai, where it trumpeted three times and died. Wat Phrathat Doi Suthep was built on that spot to house the second relic.