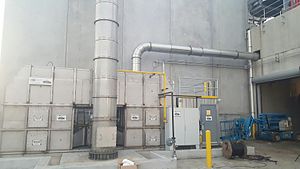 Thermal oxidizers can use a regenerative process for waste heat from industrial systems. 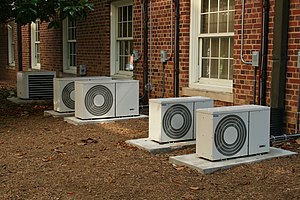 Air conditioning units use electricity which ends up as heat

Waste heat is heat that is produced by a machine, or other process that uses energy, as a byproduct of doing work. All such processes give off some waste heat as a fundamental result of the laws of thermodynamics. Waste heat has lower utility (or in thermodynamics lexicon a lower exergy or higher entropy) than the original energy source. Sources of waste heat include all manner of human activities, natural systems, and all organisms, for example, incandescent light bulbs get hot, a refrigerator warms the room air, an internal combustion engine generates high-temperature exhaust gases, and electronic components get warm when in operation.

Instead of being "wasted" by release into the ambient environment, sometimes waste heat (or cold) can be utilized by another process (such as using hot engine coolant to heat a vehicle), or a portion of heat that would otherwise be wasted can be reused in the same process if make-up heat is added to the system (as with heat recovery ventilation in a building).

Thermal energy storage, which includes technologies both for short- and long-term retention of heat or cold, can create or improve the utility of waste heat (or cold). One example is waste heat from air conditioning machinery stored in a buffer tank to aid in night time heating. Another is seasonal thermal energy storage (STES) at a foundry in Sweden. The heat is stored in the bedrock surrounding a cluster of heat exchanger equipped boreholes, and is used for space heating in an adjacent factory as needed, even months later.[1] An example of using STES to utilize natural waste heat is the Drake Landing Solar Community in Alberta, Canada, which, by using a cluster of boreholes in bedrock for interseasonal heat storage, obtains 97 percent of its year-round heat from solar thermal collectors on the garage roofs.[2][3] Another STES application is storing winter cold underground, for summer air conditioning.[4]

On a biological scale, all organisms reject waste heat as part of their metabolic processes, and will die if the ambient temperature is too high to allow this.

Anthropogenic waste heat is thought by some to contribute to the urban heat island effect. The biggest point sources of waste heat originate from machines (such as electrical generators or industrial processes, such as steel or glass production) and heat loss through building envelopes. The burning of transport fuels is a major contribution to waste heat.

In the majority of energy applications, energy is required in multiple forms. These energy forms typically include some combination of: heating, ventilation, and air conditioning, mechanical energy and electric power. Often, these additional forms of energy are produced by a heat engine, running on a source of high-temperature heat. A heat engine can never have perfect efficiency, according to the second law of thermodynamics, therefore a heat engine will always produce a surplus of low-temperature heat. This is commonly referred to as waste heat or "secondary heat", or "low-grade heat". This heat is useful for the majority of heating applications, however, it is sometimes not practical to transport heat energy over long distances, unlike electricity or fuel energy. The largest proportions of total waste heat are from power stations and vehicle engines.[citation needed] The largest single sources are power stations and industrial plants such as oil refineries and steelmaking plants.[citation needed]

The electrical efficiency of thermal power plants is defined as the ratio between the input and output energy. It is typically only 33% when disregarding usefulness of the heat output for building heat.[5] The images show cooling towers which allow power stations to maintain the low side of the temperature difference essential for conversion of heat differences to other forms of energy. Discarded or "Waste" heat that is lost to the environment may instead be used to advantage. 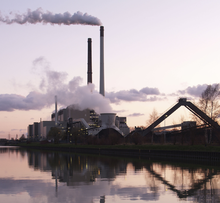 Although small in terms of power, the disposal of waste heat from microchips and other electronic components, represents a significant engineering challenge. This necessitates the use of fans, heatsinks, etc. to dispose of the heat.

For example, data centers use electronic components that consume electricity for computing, storage and networking. The French CNRS explains a data center is like a resistance and most of the energy it consumes is transformed into heat and requires cooling systems.[6]

Animals, including humans, create heat as a result of metabolism. In warm conditions, this heat exceeds a level required for homeostasis in warm-blooded animals, and is disposed of by various thermoregulation methods such as sweating and panting. Fiala et al. modelled human thermoregulation.[7] 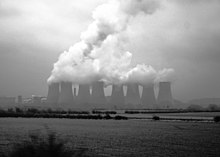 Low temperature heat contains very little capacity to do work (Exergy), so the heat is qualified as waste heat and rejected to the environment. Economically most convenient is the rejection of such heat to water from a sea, lake or river. If sufficient cooling water is not available, the plant has to be equipped with a cooling tower to reject the waste heat into the atmosphere. In some cases it is possible to use waste heat, for instance in heating homes by cogeneration. However, by slowing the release of the waste heat, these systems always entail a reduction of efficiency for the primary user of the heat energy.[citation needed]

Waste of the by-product heat is reduced if a cogeneration system is used, also known as a Combined Heat and Power (CHP) system. Limitations to the use of by-product heat arise primarily from the engineering cost/efficiency challenges in effectively exploiting small temperature differences to generate other forms of energy. Applications utilizing waste heat include swimming pool heating and paper mills. In some cases, cooling can also be produced by the use of absorption refrigerators for example, in this case it's called trigeneration or CCHP (combined cooling, heat and power).

There are many different approaches to transfer thermal energy to electricity, and the technologies to do so have existed for several decades. The organic Rankine cycle, offered by companies such as Ormat, is a very known approach, whereby an organic substance is used as working medium instead of water. The benefit is that this process can reject heat at lower temperatures for the production of electricity than the regular water steam cycle.[8] An example of use of the steam Rankine cycle is the Cyclone Waste Heat Engine. Another established approach is by using a thermoelectric device, where a change in temperature across a semiconductor material creates a voltage through a phenomenon known as the Seebeck effect.[9] A related approach is the use of thermogalvanic cells, where a temperature difference gives rise to an electric current in an electrochemical cell.[10]

Waste heat can be forced to heat incoming fluids and objects before being highly heated. For instance outgoing water can give its waste heat to incoming water in a heat exchanger before heating in homes or power plants. 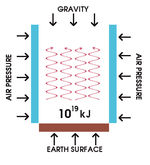 Anthropogenic heat is heat generated by humans and human activity. The American Meteorological Society defines it as "Heat released to the atmosphere as a result of human activities, often involving combustion of fuels. Sources include industrial plants, space heating and cooling, human metabolism, and vehicle exhausts. In cities this source typically contributes 15–50 W/m2 to the local heat balance, and several hundred W/m2 in the center of large cities in cold climates and industrial areas."[12]

Estimates of anthropogenic heat generation can be made by totaling all the energy used for heating and cooling, running appliances, transportation, and industrial processes, plus that directly emitted by human metabolism.

Anthropogenic heat is a much smaller contributor to global warming than are greenhouse gases.[14] In 2005, although anthropogenic waste heat flux was significantly high in certain urban areas (and can be high regionally). For example, waste heat flux was +0.39 and +0.68 W/m2 for the continental United States and western Europe, respectively) globally it accounted for only 1% of the energy flux created by anthropogenic greenhouse gases. Global forcing from waste heat was 0.028 W/m2 in 2005. This statistic is predicted to rise as urban areas become more widespread.[15]

Although waste heat has been shown to have influence on regional climates,[16] climate forcing from waste heat is not normally calculated in state-of-the-art global climate simulations. Equilibrium climate experiments show statistically significant continental-scale surface warming (0.4–0.9 °C) produced by one 2100 AHF scenario, but not by current or 2040 estimates.[15] Simple global-scale estimates with different growth rates of anthropogenic heat[17] that have been actualized recently[18] show noticeable contributions to global warming, in the following centuries. For example, a 2% p.a. growth rate of waste heat resulted in a 3 degree increase as a lower limit for the year 2300. Meanwhile, this has been confirmed by more refined model calculations.[19]

One research showed that if anthropogenic heat emissions continue to rise at the current rate, they will become a source of warming as strong as GHG emissions in the 21 century.[20]