War Child is a non-governmental organisation founded in the UK in 1993 which provides assistance to children in areas experiencing conflict and the aftermath of conflict. The establishment of War Child UK was soon followed by organisations in Canada and the Netherlands.

War Child UK aims to support and rehabilitate child victims of war, by working with local communities, their organisations and local authorities in both conflict and post-conflict areas to support children and the people they depend upon. War Child UK currently works in Democratic Republic of Congo, Central African Republic, Uganda, Afghanistan, Iraq and with Syrian refugees in Jordan.

War Child Holland was founded in 1994 by Willemijn Verloop as a reaction to the war in Bosnia. Today it is the largest War Child office with a yearly expenditure of 12.6 million Euros in 2010,[1] and has specialised in helping the psychosocial needs of children who have suffered from war and conflict situations, using creative arts.[2] The organisation grew from a one-man office in 1994, to 40 employees in the Netherlands and 600 abroad in 2007.[3][4]

War Child runs music, creative, and sports activities for war-affected children. In 2005 War Child Holland introduced a new measurement system for the programmes in 14 countries. In the first results it was shown that the projects reach more than 650,000 children worldwide.[5]

War Child was founded in 1993 by British filmmakers Bill Leeson and David Wilson, when they returned from filming in the war in former Yugoslavia. In 1993 the first War Child convoy with equipment and food to run a mobile bakery travelled to former Yugoslavia. War Child Netherlands was founded shortly after in 1994 by Willemijn Verloop, when she met Music Therapy professor Nigel Osborne during the war in Bosnia; War Child Holland programmes have been concerned with the provision of psychosocial aid. War Child Canada was founded in 1998 by Samantha Nutt and Eric Hoskins. 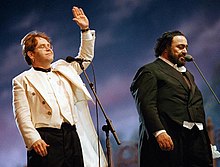 Elton John with Luciano Pavarotti during the 1996 Pavarotti & Friends concert for War Child in Modena, Italy

During the war in the Balkan, War Child worked together with the media, music and entertainment industries to raise funds and public awareness of the daily struggle for survival facing children in war zones. Artists including Brian Eno, David Bowie, Bono, Luciano Pavarotti, and Tom Stoppard backed the War Child cause at the start-up of the organization. In 1995 the record-breaking release of The Help Album made it possible for War Child to start major projects in the former Yugoslavia. Since 1993, artists including Paul McCartney, Paul Weller, Oasis and Radiohead have joined the War Child cause.[clarification needed]

In 2005, to mark the 10th anniversary of The Help Album, War Child UK launched Help!: A Day in the Life. In addition to Radiohead and Manic Street Preachers, the new album featured artists such as Coldplay, Bloc Party, Gorillaz, Elbow, and Kaiser Chiefs, along with Keane who are current patrons of War Child UK. Another compilation album, Heroes, was released in February 2009.

In 2008 War Child helped realise the film "The Silent Army" which was an initiative of War Child ambassador Marco Borsato. The film attracted a lot of attention in the Netherlands and was selected for the 'Un Certain Regard' section of the Cannes film festival in 2009.[citation needed] On February 18, 2013, English alternative rock band Muse performed live, to a sold out crowd, at the O2 Shepherd's Bush Empire in honour of War Child's 20th year of existence.[citation needed]

The video game This War of Mine was released on November 14, 2014 by 11 bit studios in partnership with War Child as part of the "Real War is Not a Game" campaign.[6] The goal of the campaign is to halt the perpetuation of war crimes, such as hostage taking or other breaches of the Geneva Conventions, in video games.[7] On March 9, 2015, downloadable content for the game was released on Steam, titled "War Child Charity DLC", the proceeds of which were donated to War Child.[8][9][10] A bundle of 12 games called HELP: THE GAME,[11] also available on Steam, donates all of its proceeds to War Child as well. Released on July 28, 2016, this bundle is the result of various well-known game developers taking part in a 6-day-long game jam.[12] Creative Assembly said it would donate 25 percent of pre-order profit from Total War Saga: Thrones of Britannia sales on Steam.[13]

In 2018 Lady Amelia Windsor donated twenty percent of the proceeds from her shoe line collaboration with Penelope Chilvers to War Child.[14]

Starting off with mobile bakeries from the UK and with both rebuilding and music programmes from Holland, War Child projects expanded rapidly during the years. War Child expanded programmes within the Balkan to other countries and regions, like Kosovo. In 1995 War Child UK was undertaking the establishment of a children's music centre in Mostar, later to be called The Pavarotti Music Centre. War Child Holland actively supporting the Music Therapy Programme in Bosnia, a direction they would later specialise in; using creative and psychosocial means to heal traumas of war. From 1995 the War Child Diabetic Programme restored the diabetic support system in Bosnia; and until 1998 War Child remained one of the main suppliers of diabetic medicines throughout Bosnia and Herzegovina.

War Child has historically been supported and endorsed by numerous influential patrons. However, it lost support from Luciana Pavarotti, Brian Eno, and three other celebrity patrons, along with 11 trustees, after it was discovered that in 1995 co-founder Bill Leeson took a bribe from contractors building a music centre in Bosnia.[15] In 2001 when the story broke, War Child said that any financial mismanagement in the charity occurred "years ago" and they are "dealing properly with these historical charges".[16] The UK Charity watchdog, the Charities Commission stated that they had been involved with the trustees regarding the matter since 1998. While the internal matter at War Child seems to have been rectified, David Wilson remains blacklisted in the aid world following his whistleblowing,[citation needed] and Bill Leeson is now a director at GardenAfrica, a charity he co-founded in 2002.