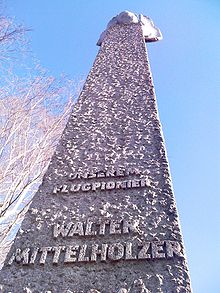 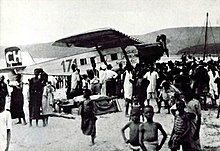 Earliest aerial photography of Rapperswil by Walter Mittelholzer in 1919

Walter Mittelholzer (April 2, 1894 – May 9, 1937) was a Swiss aviation pioneer. He was active as a pilot, photographer, travel writer, and also as one of the first aviation entrepreneurs.

Born on April 2, 1894 in St. Gallen as the son of a baker, Mittelholzer earned his private pilot's license in 1917, and in 1918 he completed his instruction as a military pilot.

On November 5, 1919 he co-founded an air-photo and passenger flight business, Comte, Mittelholzer, and Co. In 1920 this firm merged with the financially stronger Ad Astra Aero. Mittelholzer was the director and head pilot of Ad Astra Aero which later became Swissair.

He made the first North-South flight across Africa. It took him 77 days. Mittelholzer started in Zürich on December 7, 1926, flying via Alexandria and landing in Cape Town on February 21, 1927. Earlier, he had been the first to do serious aerial reconnaissance of Spitsbergen, in a Junkers monoplane, in 1923.[1] On December 15, 1929 he became the first person to fly over Mt. Kilimanjaro, and planned to fly over Mount Everest in 1930.[2][3] In 1931, Mittelholzer was appointed technical director of the new airline called Swissair, formed from the merger of Ad Astra Aero and Balair.[4] Throughout his life he published many books of aerial photographs and marketed his expeditions through films and the media as well.[5] He died in 1937 in a climbing accident on an expedition in the Hochschwab massif in southwest face of Stangenwand in Styria, Austria.[6]

Among other Swiss air pioneers, he is commemorated in a Swiss postage stamp issued in January 1977. His legacy of some 18,500 photographs is kept at ETH Library's image archive in Zurich, Switzerland.

Select bibliography of books by Mittelholzer 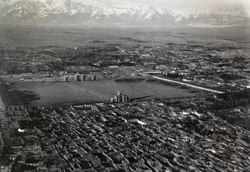 Aerial view of Tehran in 1925 by Walter Mittelholzer