Wallis and Futuna, officially the Territory of the Wallis and Futuna Islands[3] (/ˈwɒlɪs ... fuːˈtuːnə/; French: Wallis-et-Futuna [walis.e.futuna] or Territoire des îles Wallis-et-Futuna, Fakauvea and Fakafutuna: 'Uvea mo Futuna), is a French island collectivity in the South Pacific between Tuvalu to the northwest, Fiji to the southwest, Tonga to the southeast, Samoa to the east, and Tokelau to the northeast.

Its land area is 142.42 km2 (54.99 sq mi) with a population of 11,558 at the 2018 census (down from 14,944 at the 2003 census).[1][4] Matā'Utu is the capital and biggest city. The territory is made up of three main volcanic tropical islands along with a number of tiny islets, and is split into two island groups that lie about 260 km (160 mi) apart, namely the Wallis Islands ('Uvea) in the northeast, and the Hoorn Islands (also known as the Futuna Islands) in the southwest, including Futuna Island proper and the mostly uninhabited Alofi Island.

Drawing of Wallis Island by captain Samuel Wallis in 1767

Coastal view of Wallis island by captain James Cook in 1773

Ruins of the Talietumu fort

The earliest signs of human habitation in these islands are from the Lapita culture, dating to around 850 to 800 BCE. The islands served as natural stopover points for boat traffic going between Fiji and Samoa. During Tongan invasions in the 15th and 16th centuries the islands showed varying levels of resistance and assimilation, with Futuna retaining more of its pre-Tongan cultural features while Wallis underwent more fundamental changes in society, language and culture.[5] The original inhabitants built forts and other identifiable ruins on the islands, some of which are still partially intact. Oral history and archaeological evidence suggest that the Tongan invaders reoccupied and modified some of these structures. Oral history also preserves a cultural memory of long-standing relationships between Samoa and Futuna going back to the islanders' origin stories.[5]

Futuna was first put on European maps by Willem Schouten and Jacob Le Maire during their circumnavigation of the globe in 1616. They named the islands "Hoornse Eylanden" after the Dutch town of Hoorn where they hailed from. This was later translated into French as "Isles de Horne." The Wallis Islands are named after the British explorer Samuel Wallis, who sailed past them in 1767 after discovering Tahiti.[6][7] The French were the first Europeans to settle in the territory,[citation needed] with the arrival of French missionaries in 1837, who converted the population to Roman Catholicism. Pierre Chanel, canonized as a saint in 1954, is a major patron of the island of Futuna and the region.

On 5 April 1842, the missionaries asked for the protection of France after the rebellion of a part of the local population. On 5 April 1887, the Queen of Uvea (on the island of Wallis) signed a treaty officially establishing a French protectorate. The kings of Sigave and Alo on the islands of Futuna and Alofi also signed a treaty establishing a French protectorate on 16 February 1888. The islands were at that time put under the authority of the French colony of New Caledonia.

In 1917, the three traditional kingdoms were annexed by France and were integrated into the Colony of Wallis and Futuna, which was still under the authority of the Colony of New Caledonia.[citation needed]

During World War II, the islands' administration was briefly pro-Vichy until a Free French corvette from New Caledonia deposed the regime on 26 May 1942. Units of the US Marine Corps later landed on Wallis on 29 May 1942.[8]

In 1959, the inhabitants of the islands voted to become a separate French overseas territory, effective in 1961, thus ending their subordination to New Caledonia.[9]

In 2005, the 50th King of Uvea, Tomasi Kulimoetoke II, faced being deposed after giving sanctuary to his grandson who was convicted of manslaughter. The King claimed his grandson should be judged by tribal law rather than by the French penal system. As a result, there were riots in the streets involving the King's supporters, who were victorious over attempts to replace the King. Two years later, Tomasi Kulimoetoke died on 7 May 2007. The state was in a six-month period of mourning, during which mentioning a successor was forbidden.[10] On 25 July 2008, Kapiliele Faupala was installed as King despite protests from some of the royal clans. He was deposed in 2014. A new king, Patalione Kanimoa, was eventually installed in Uvea in 2016; Lino Leleivai in Alo on Futuna succeeded after Filipo Katoa had abdicated, and Eufenio Takala succeeded Polikalepo Kolivai in Sigave. The French president, François Hollande, was present.

The capital of the collectivity is Matāʻutu on the island of Uvéa, the most populous of the Wallis Islands. As an overseas collectivity of France, it is governed under the French constitution of 28 September 1958, and has universal suffrage for those over 18 years of age. The French president is elected by popular vote for a five-year term; the high administrator is appointed by the French president on the advice of the French Ministry of the Interior; the presidents of the Territorial Government and the Territorial Assembly are elected by the members of the assembly.

The legislative branch consists of the unicameral Territorial Assembly or Assemblée territoriale of 20 seats; the members are elected by popular vote to serve five-year terms. Wallis and Futuna elect one senator to the French Senate and one deputy to the French National Assembly.

Justice is generally administered under French law by a tribunal of the first instance in Mata-Utu, but the three traditional kingdoms administer justice according to customary law (only for non-criminal cases). The Court of Appeal is in Nouméa, New Caledonia.

Location map of Wallis and Futuna 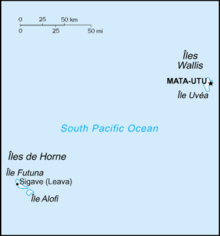 Map of the territory of Wallis and Futuna

Only five percent of the islands' land area is arable land; permanent crops cover another 20%. Deforestation (only small portions of the original forests remain), largely as a result of the continued use of wood as the main fuel source, is a serious problem; as a consequence of cutting down the forests, the mountainous terrain of Futuna is particularly prone to erosion. There are no permanent settlements on Alofi because of the lack of natural freshwater resources. 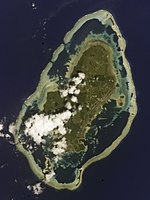 See also: List of mammals of the Wallis and Futuna Islands

The GDP of Wallis and Futuna in 2005 was 188 million US dollars at market exchange rates.[2] The territory's economy is limited to traditional subsistence agriculture, with about 80% of the labor force earning its livelihood from agriculture (coconuts and vegetables), livestock (mostly pigs), and fishing. About 4% of the population is employed in government. Revenues come from French government subsidies, licensing of fishing rights to Japan and South Korea, import taxes, and remittances from expatriate workers in New Caledonia, French Polynesia and France. Industries include copra, handicrafts, fishing, and lumber. Agricultural products include coconuts, bread fruit, yams, taro, bananas, pigs, and fish. In 1991, BNP Nouvelle-Calédonie, a subsidiary of BNP Paribas, established a subsidiary, Banque de Wallis-et-Futuna, which currently is the only bank in the territory. Two years earlier Banque Indosuez had closed the branch at Mata-Utu that it had opened in 1977, leaving the territory without any bank. Many exports include copra, chemicals, and fish.

Lack of economic opportunities has since the 1950s pushed many young Wallisians and Futunians to migrate to the more prosperous French territory of New Caledonia, where, as French citizens, they can legally settle and work. More recently (since the middle of the 2000s), political tensions on the main island of Wallis (Uvea), due to a feud between rival aristocratic clans who are supporting competing kings, has led to a new surge of emigration towards New Caledonia and even the very distant Metropolitan France. At the 2014 New Caledonian census, 21,926 residents of New Caledonia (both born in New Caledonia and in Wallis and Futuna) self-reported their ethnicity as Wallisian and Futunian, which is almost double the total population of Wallis and Futuna.[15]

Cathedral of Our Lady of the Assumption, Mata-Utu

The culture of Wallis and Futuna is Polynesian, and is very similar to the cultures of its neighbouring nations Samoa and Tonga. The Wallisian and Futunan cultures share very similar components in language, dance, cuisine and modes of celebration.

Fishing and agriculture are the traditional occupations and most people live in traditional fale houses in an oval shape made of thatch.[21] Kava, as with many Polynesian islands, is a popular beverage brewed in the two islands, and is a traditional offering in rituals.[21] Highly detailed tapa cloth art is a specialty of Wallis and Futuna.[22]

In 1994, the territory had 1,125 telephones in use, had one AM radio station, and two television broadcast stations.[citation needed] Communication costs are high, costing up to ten times as much[citation needed] as western countries. The island of Wallis has about 100 kilometres (62 mi) of roadways, of which 16 are paved, while the island of Futuna has only 20 kilometres (12 mi), none are paved. The territory has two main ports and harbours, Mata-Utu and Leava (on the island of Futuna), that support its merchant marine fleet consisting of three ships (two passenger ships and a petroleum tanker), totaling 92,060 GRT or 45,881 tonnes. There are two airports, Hihifo Airport on Wallis with a paved runway of 2.1 kilometres (1.3 mi), and Pointe Vele Airport on Futuna with a 1 kilometre (0.62 mi) smaller runway.[23] New Caledonia-based Aircalin operates the only commercial flights that go to Wallis, where it has an office in Mata-Utu. There are currently no commercial boat operators.

There is also an agricultural high school.[26]

As of 2018, yaws was endemic in the area, but cases were not being reported to the WHO eradication programme.[28]

Healthcare is available free of charge in two hospitals on Uvea and Futuna islands.[29] There are also three dispensaries.[30]

Deforestation is a major concern in the region as only small portions of the original forests remain due to the continued use of wood as the main source of fuel. Consequently, the mountainous terrain of Futuna has become prone to erosion. There are no permanent settlements on Alofi due to the lack of natural freshwater resources, and the presence of infertile soil on the islands of Uvea and Futuna further reduces the agricultural productivity.[31]