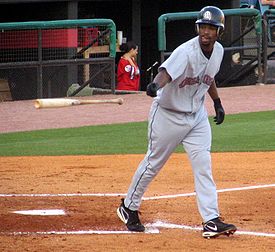 Rashad Eldridge of the Oklahoma Redhawks walks to first base after drawing a base on balls.

A base on balls (BB), also known as a walk, occurs in baseball when a batter receives four pitches that the umpire calls balls, and is in turn awarded first base without the possibility of being called out. The base on balls is defined in Section 2.00 of baseball's Official Rules,[1] and further detail is given in 6.08(a).[2] It is, however, considered a faux pas for a professional player to actually walk to first base; the batter-runner and any advancing runners normally jog on such a play.[3][4]

The term "base on balls" distinguishes a walk from the other manners in which a batter can be awarded first base without liability to be put out (e.g., hit by pitch (HBP), catcher's interference).[5] Though a base on balls, catcher's interference, or a batter hit by a pitched ball all result in the batter (and possibly runners on base) being awarded a base,[6] the term "walk" usually refers only to a base on balls, and not the other methods of reaching base without the bat touching the ball. An important difference is that for a hit batter or catcher's interference, the ball is dead and no one may advance unless forced; the ball is live after a walk (see below for details).

A batter who draws a base on balls is commonly said to have been "walked" by the pitcher. When the batter is walked, runners advance one base without liability to be put out only if forced to vacate their base to allow the batter to take first base. If a batter draws a walk with the bases loaded, all preceding runners are forced to advance, including the runner on third base who is forced to home plate to score a run; when a run is forced on a walk, the batter is credited with an RBI per rule 9.04.[7]

A hit by pitch is not counted statistically as a walk, though the effect is mostly the same, with the batter receiving a free pass to first base. One exception is that on a HBP (hit-by-pitch), the ball is dead. On a HBP, any runners attempting to steal on the play must return to their original base unless forced to the next base anyway. When a walk occurs, the ball is still live: any runner not forced to advance may nevertheless attempt to advance at his own risk, which might occur on a steal play, passed ball, or wild pitch. Also, because a ball is live when a base on balls occurs, runners on base forced to advance one base may attempt to advance beyond one base, at their own risk. The batter-runner himself may attempt to advance beyond first base, at his own risk. Rule 6.08 addresses this matter as well.[9] An attempt to advance an additional base beyond the base awarded might occur when ball four is a passed ball or a wild pitch.

In 2017, Major League Baseball approved a rule change allowing for a batter to be walked intentionally by having the defending bench signal to the Umpire. The move was met with some controversy.[14]

Intentional base on balls

Main article: Intentional base on balls

Intentional walks do carry risks, however. They carry an obvious, inherent risk: they give the offensive team another runner on base, without any effort on their part, who could potentially score a run. They may carry additional risks. 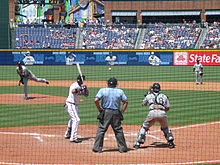 Mark Hendrickson of the Florida Marlins intentionally walking the Atlanta Braves' Yunel Escobar in 2008. Note the Florida catcher, Mike Rabelo, in a standing position behind the opposite batter's box to receive the pitch

Another risk taken by the defensive team in issuing a base on balls is that since intentional balls must be pitched in a legal manner, they can legally become wild pitches or passed balls. Likewise, a baserunner can attempt to steal a base, or the batter can choose to swing at an intentional ball; however, these rarely occur since taking these risks is rarely more beneficial to the offensive team than allowing the walk. In the Major Leagues, the most recent example of a swing at an intentional ball resulting in a hit occurred during a June 22, 2006 game between the Florida Marlins and the Baltimore Orioles. In the top of the 10th inning, with a runner on second base, Baltimore pitcher Todd Williams was signaled to intentionally walk the Marlins' Miguel Cabrera. Noticing that the intentional ball came in too close to the plate, Cabrera swung at the ball, resulting in a base hit, and a run scored for Florida.[15]

Though intentional walks are recorded as such in the records of the official scorer, they are combined with standard, non-intentional walks when calculating a player's on-base percentage, and have only received a separate column in a player's statistics since 1955.

Batters, on occasion, have been given intentional walks with the bases loaded (effectively giving the offensive team a risk-free run), although this occurs very infrequently.[16] This is generally done in the 9th inning when the pitching team is ahead by more than one run, and the batter is highly skilled. The free run does not matter to either team, as the pitching team remains ahead, and in theory the pitcher feels more comfortable in his ability to get the following batter out instead.

A common nickname for the intentional walk is four-finger salute, since most managers call for an intentional walk by holding up four fingers. As of 2017, the manager may simply request to the plate umpire to let the batter go to first instead of having the pitcher waste four outside pitches.

Barry Bonds is the all-time record holder with 688 intentional bases on balls. The next most is Hank Aaron with 293.[17]

Jimmie Foxx, Andre Thornton, Jeff Bagwell and Bryce Harper have each been walked six times during a major league regular season game.[18] Among pitchers, Tommy Byrne and Bruno Haas both gave up 16 bases on balls in a game.[19]