listen)) is a municipality and a historic town in the central Netherlands, in the province of Gelderland. It is famous for Wageningen University, which specialises in life sciences. The municipality had a population of 38,774 in 2019, of which many thousands are students from over 150 countries.

Wageningen is situated on the north bank of the Nederrijn (the Dutch portion of the Lower Rhine) part of the Gelderse valley (Dutch: Gelderse Vallei) and the Veluwe, of which the southwest hill is called the Wageningse Berg. Wageningen can be reached by car from highways A12 via the N781, A15 via the N233 and N225, and A50 via the N225, and from the Ede-Wageningen railway station via a 20-minute bus drive to the Wageningen central terminal (see below).[6],[7] 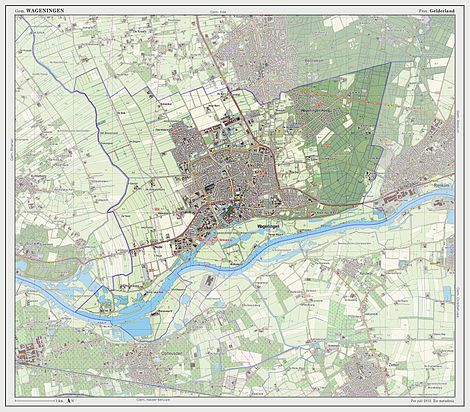 Topographic map of the municipality of Wageningen, July 2013 (click to enlarge)

Wageningen in the 17th century
Main article: History of Wageningen

The oldest known settlements in the Wageningen area were located north of today's town centre.[1] They were mentioned as early as 828. During the early Middle Ages a small church was built on the hill east of the town. Several wood farms have been found near the top of the hill. In the twelfth century people settled at what is currently the Bergstraat. Close to Hotel de Wereld a stone floor has been found dating back to this period. After the construction of a dike to protect the city from the acidic water from the moors that then occupied the Gelderse Vallei (the current Hoogstraat), the oldest part of the present city was built to the south. The parts of the city north of the Hoogstraat were built later. Wageningen received city rights in 1263.[1] The city was protected by a city wall and a moat, and in 1526 a castle was built. The castle was dismantled during the 18th century, but the foundations of three of the towers and part of the wall remain visible today.

The people, city, and institutions of Wageningen suffered greatly during World War II. The central part of Wageningen was destroyed by artillery fire soon after the German invasion of the country in May 1940. The town is also famous for its role at the end of the war: Wageningen was the site of the surrender of German General Johannes Blaskowitz to Canadian General Charles Foulkes on May 5, 1945, officially ending the war in the Netherlands. The generals negotiated the terms of surrender in the Hotel de Wereld, near the center of the city.[1] Now, each year on the 5th of May, Liberation Day in the Netherlands, Wageningen hosts a large festival to celebrate the liberation. On this occasion, veteran soldiers parade through the city and are honoured for their service, and around 120,000 people[8] visit the pop-podia around the city.[9]

In 1918 the town acquired its first institution of higher education, the Landbouwhogeschool Nederland (Netherlands Agricultural College), which was based on the previous agricultural college founded in 1876, and which later became Wageningen University.[10] This initiated the development from a small historical town into a modern technological community, a process which still continues today.

Today, Wageningen is also the central city in Food Valley,[11] the Dutch food & nutrition cluster concentrated around WUR, and comprising many institutes, companies and facilities in the food & nutrition field. Food Valley is regarded as the largest food & nutrition Research & Development cluster in the world. One such firm, Keygene, a biotechnology company in Wageningen developed AFLP in the early 1990s and collaborated with Beijing Genomics Institute to sequence the entire genome of Brassica napus.

The city had its own professional football (soccer) club, FC Wageningen, which won the KNVB-beker (KNVB Cup) twice.[12][13] The club went bankrupt in 1992 and played its last match in May 1992 against NAC Breda.

The city is also home to the largest Korfball club in the country, Wageningen Korfball Club, originally known as Vada before merging with two other local clubs.

Several firms provide public bus service in and to Wageningen. From the Wageningen central bus terminal, lines connect to Rhenen, Tiel, Veenendaal, Utrecht, Oosterbeek, and Arnhem, and the Ede-Wageningen railway station. Further connections via bus, including to the Hoge Veluwe National Park and the Kröller-Müller Museum, also may be made at the Ede-Wageningen station. Bus service includes the following:[14] 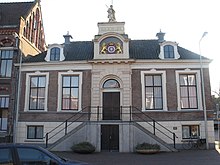 Composition of the Wageningen municipal council since 1982: 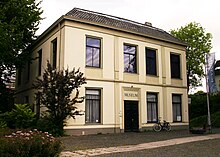 The city has a project relation with the towns: Zhangzhou, China and Ndiza, (Rwanda).[27]