The Volvo XC90 is a mid-size luxury crossover SUV manufactured and marketed by Volvo Cars since 2002 and now in its second generation.

At the end of 2014, the second generation XC90 was introduced. It is based on a new global platform, the Scalable Product Architecture (SPA). Both generations of the XC90 have won Motor Trend's SUV of the Year award in their debuts.

In January 2001, Volvo débuted its Adventure Concept Car at the North American International Auto Show, to gauge reaction to the styling and features of its upcoming SUV.[8] In November 2001, Volvo released a teaser image showing the frontal styling of the production version, named the XC90. Notable as Volvo's first SUV model, the styling of the XC90 recalled the concept.[9] In January 2002, the full XC90 unveiling occurred, at the North American International Auto Show.[9] Production began in August 2002, after Volvo's traditional mid-year shutdown, with the first XC90s coming out of the Torslanda factory in Sweden.[9]

The XC90 won the North American Car of the Year award and Motor Trend magazine's Sport/Utility of the Year for 2003.

The ex-host of Top Gear, Jeremy Clarkson, has owned three of these vehicles,[11] and claims they were designed by someone who must've had children due to its practicality.

For model year (MY) 2009, the XC90 received a new rear logo, featuring larger lettering with wider spaces between the "VOLVO" letters.

In 2010, all XC90 models received painted wheel arches (previously they were optional). In addition, a new, larger, circular Volvo logo appeared on the front grille.

In early 2005 a special version called Ocean Race Edition was unveiled. Special blue colour, leather interior with contrast stitching and special interior trim.[15] A total of 800 were made.[16]

The first generation Volvo XC90 continues to be sold in China as the XC Classic.[17] It is being produced at the new Volvo factory located in Daqing,[18] Heilongjiang Province, with the necessary tooling shipped over from Sweden.[19] Equipment levels were changed compared to the international versions and only one engine, a 2.5L turbo petrol 5-cylinder engine[20] with 220 hp, is available. All XC Classic come with AWD as standard and either a 5-speed manual or 5-speed automatic transmission.[21] It is priced below the second generation XC90.[18]

The Volvo XC90's front end is designed to absorb frontal impacts and also deflect any pedestrians up on to the hood of the vehicle rather than underneath the vehicle. Volvo has patented the unique frontal structure that features crumple zones, and predetermined positions for the engine and other ancillaries during a frontal impact.[citation needed]

The XC90's roof is reinforced with ultra-high-strength steel to help prevent a collapse in the passenger cavity in the event of a roll-over. This Volvo system is marketed as ROPS, and is closely associated with the Roll Stability Control (RSC), electronic stability control (DSTC), and SIPS systems of Volvo to prevent and ultimately minimise accident forces. The National Highway Traffic Safety Administration measures the roll-over risk of the 2013 XC90 as 17.9%.[25] The maximum sideway thrust is 0.77g.[26]

The XC90's rear structure has been designed to absorb impact energy, with occupants are also protected by a whiplash protection system. Marketed as WHIPS, the system cradles the occupants during a rear-end collision.

The Insurance Institute for Highway Safety awarded the Volvo XC90 their Top Safety Pick award. The XC90 was granted the IIHS's rating of "good" in front, side, rear and roof strength tests and has Electronic Stability Control as standard equipment to receive the award.[27]

At the end of July 2007, Volvo Car Corp. announced the recall of 42,211 2005 model year XC90s for risk of battery short circuit and fire. The vehicles were manufactured in the Swedish Torslanda Plant between 7 June 2004, and 13 May 2005.[30] The recall only applies to cars in the US and Canada.[31] There have been no reports of short circuiting in the vehicles.[citation needed]

In May 2012 Volvo announced that the second generation XC90 would go into production in late 2014, with orders being taken in 2014 and the vehicle officially going on sale in 2015.[42] The SUV would be sold in Europe, Asia and North America, with the United States expected to account for at least a third of global sales.[43]

The First Edition of the all-new Volvo XC90, 1,927 individually numbered cars only available for sale via digital commerce, sold out in 47 hours after orders opened on 3 September 2014.[45] All 1,927 of the First Edition models, which could feature either the Petrol T6 or Diesel D5 engine, were finished in Onyx Black and feature 21-inch alloy wheels and include every available vehicle option. The limited production run number represents the year the Swedish brand was launched, with each model fitted with uniquely numbered tread plates and a distinctive rear mounted badge,[46] with customers able to select their XC90 First Edition numbers. Number 1 was allocated to Carl XVI Gustav, the King of Sweden, with number 10 going to Zlatan Ibrahimović, Swedish professional footballer.

The new XC90 has a redesigned chassis with double wishbone front suspension and a new integral link rear axle incorporating transverse leaf spring of lightweight material.[47][48] The new XC90 can also be equipped with electronically controlled air suspension with a choice of five modes.[45]

The interior features a 9" tablet-like touch screen control console along with steering wheel controls and voice-control system, all linked to an interface, marketed as Sensus, which allows for access to cloud-based apps including Internet radio, connected navigation, parking, music streaming, OS mirroring Apple and Android devices in the touch screen display, and a Wi-Fi hot spot for using a tablet in the car. Other features include a gear lever made of Orrefors crystal as well as diamond-cut controls for the start/stop button and drive mode control, located on the centre console between the driver and passenger seats.

The highest level audio system in the XC90 features a 1400W Class-D amplifier and 19 Bowers & Wilkins speakers as well as one of the first air-ventilated subwoofers in a car.[citation needed] Integrated into the car body, it turns the entire interior space into a large subwoofer. The latest sound processing software has been used to manage the timing of the sound and co-ordination of the speakers.

The vehicle's seats have also been redesigned with adjustable side bolsters, seat cushion extension and massage. The second row features three individual seats with recline adjustment. A sliding function can be used to create more legroom for the passengers in the third row or to increase loading space. An integrated child booster cushion in the centre seat is available. The Volvo XC90 seats 5 people or can be available with 3rd row seating which seats 7 people.

Volvo Cars' air purification system has been improved by adding a new carbon filter for more efficient capture of small, particles and pollen in the incoming air. The second generation XC90 offers a 360° view system capable of providing the driver with a birds-eye view, whereby information from all cameras is gathered and digitally integrated in a central processor to form a 360° image. The rear sensing system, marketed as Park Assist Pilot, offers automatic reversing into a parking bay.[45]

The 2nd generation XC90 is the first Volvo to carry the company's new, more prominent iron mark, which has the iconic arrow aligned with the diagonal metallic slash across the grille,[49] along with T-shaped LED daytime running lights known as "Thor's Hammer" by Volvo designers.[50]

The Volvo XC90 safety systems include:

The Volvo brand has also made the claim that "By 2020, nobody shall be seriously injured or killed in a new Volvo."[56]

EURONCAP tested in 2015 a XC90 (model year 2016), 5-door SUV with standard equipment. EuroNCAP regards the XC90 model as a "best in class" performer.[57] NHTSA only recorded for rollover.

The Insurance Institute for Highway Safety also crash-tested the XC90, and presented the following results: 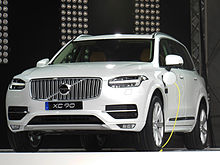 The T8 plug-in hybrid version of the XC90 is based on technology used in the Volvo V60 PHEV.[43] The batteries which are situated at the centre of the vehicle can be charged using an electric vehicle charger and can also store energy recovered by means of regenerative brakes. Volvo says that the XC90 T8 sacrifices no passenger or cargo space to accommodate the hybrid equipment.[44] However, the tank capacity was reduced to 50 L (13.2 US gal; 11.0 imp gal)[62] for MY2016-2018 and there is no spare tire.