One volt is defined as the difference in electric potential between two points of a conducting wire when an electric current of one ampere dissipates one watt of power between those points.[2] Equivalently, it is the potential difference between two points that will impart one joule of energy per coulomb of charge that passes through it. It can be expressed in terms of SI base units (m, kg, s, and A) as:

It can also be expressed as amperes times ohms (current times resistance, Ohm's law), webers per second (magnetic flux per time), watts per ampere (power per unit current, definition of electric power), or joules per coulomb (energy per unit charge), which is also equivalent to electronvolts per elementary charge:

The "conventional" volt, V90, defined in 1987 by the 18th General Conference on Weights and Measures[3] and in use from 1990, is implemented using the Josephson effect for exact frequency-to-voltage conversion, combined with the caesium frequency standard.

This standard is typically realized using a series-connected array of several thousand or tens of thousands of junctions, excited by microwave signals between 10 and 80 GHz (depending on the array design).[5] Empirically, several experiments have shown that the method is independent of device design, material, measurement setup, etc., and no correction terms are required in a practical implementation.[6]

In the water-flow analogy, sometimes used to explain electric circuits by comparing them with water-filled pipes, voltage (difference in electric potential) is likened to difference in water pressure. Current is proportional to the diameter of the pipe or the amount of water flowing at that pressure. A resistor would be a reduced diameter somewhere in the piping and a capacitor/inductor could be likened to a "U" shaped pipe where a higher water level on one side could store energy temporarily.

The relationship between voltage and current is defined (in ohmic devices like resistors) by Ohm's law. Ohm's Law is analogous to the Hagen–Poiseuille equation, as both are linear models relating flux and potential in their respective systems.

A multimeter can be used to measure the voltage between two positions. 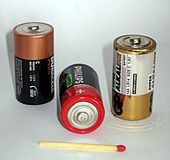 The voltage produced by each electrochemical cell in a battery is determined by the chemistry of that cell (see Galvanic cell § Cell voltage). Cells can be combined in series for multiples of that voltage, or additional circuitry added to adjust the voltage to a different level. Mechanical generators can usually be constructed to any voltage in a range of feasibility. 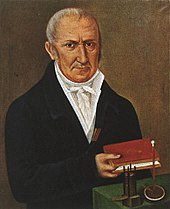 In 1800, as the result of a professional disagreement over the galvanic response advocated by Luigi Galvani, Alessandro Volta developed the so-called voltaic pile, a forerunner of the battery, which produced a steady electric current. Volta had determined that the most effective pair of dissimilar metals to produce electricity was zinc and silver. In 1861, Latimer Clark and Sir Charles Bright coined the name "volt" for the unit of resistance.[11] By 1873, the British Association for the Advancement of Science had defined the volt, ohm, and farad.[12] In 1881, the International Electrical Congress, now the International Electrotechnical Commission (IEC), approved the volt as the unit for electromotive force.[13] They made the volt equal to 108 cgs units of voltage, the cgs system at the time being the customary system of units in science. They chose such a ratio because the cgs unit of voltage is inconveniently small and one volt in this definition is approximately the emf of a Daniell cell, the standard source of voltage in the telegraph systems of the day.[14] At that time, the volt was defined as the potential difference [i.e., what is nowadays called the "voltage (difference)"] across a conductor when a current of one ampere dissipates one watt of power.

A redefinition of SI base units, including defining the value of the elementary charge, took effect on 20th May 2019.[16]